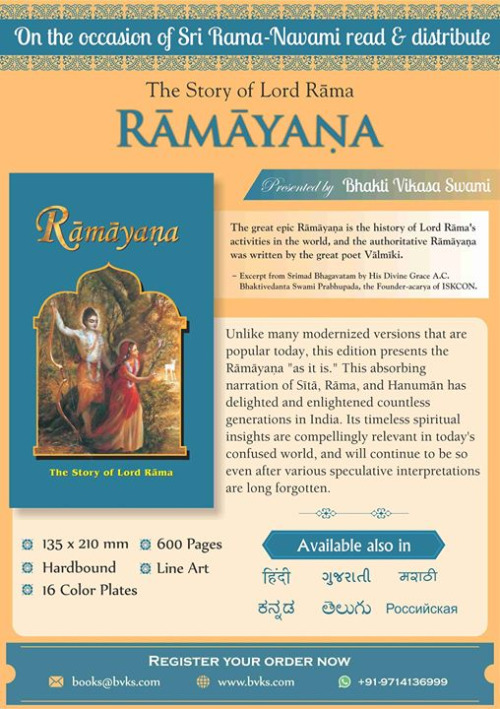 “RAMAYANA”
Srimad Bhagavatam describes how Lord Krsna, The Supreme Personality of Godhead appeared in a transcendental human form as Lord Ramacandra in His eighteenth incarnation and exhibited superhuman powers. The name, form, qualities, and pastimes activities of this form are depicted in the great treatise of Ramayana. There are different versions of Ramayana in different parts of India and in different parts of the world yet the acaryas all accepted Valmiki Ramayana as the original version.

Srila Prabhupada stated that Ramayana is a historical epic that contains all necessary information from the Vedas. As such it is on par with other books of Vedic knowledge and it behooves a sincere seeker of the absolute truth to read and study this great transcendental work. Even when The Supreme Personality of Godhead appeared in His original form of Syamasundara, in His Balya lila (childhood pastimes) He playfully enacted the pastimes of His form as Lord Rama.

Lord Rama being the Supreme Personality of Godhead, is fully replete with six opulences and the reservoir of all auspiciousness and thus reading, speaking about or hearing about Lord Rama elevates ones consciousness and cause one to return back home, back to Godhead. We find that throughout the history of Bharat varsha (India), people would gather to discuss and hear about Ramayana and derive great knowledge on dharma, culture and spiritual bliss from its narrations. Indeed the impact of the teachings and pastimes of Lord Rama were felt as far as Southeast Asia where countries such as Cambodia, Laos, Thailand and Malaysia have local editions of Ramayana that narrate the epic in traditional dramas, songs and stories in their own language.

Although Srila Prabhupada elaborately described the pastimes of Lord Krsna in his writings he also wished that the pastimes of Lord Rama be widely broadcast. His Holiness Bhakti Vikasa Swami, a disciple of Srila Prabhupada has produced an edition of Ramayana. Although it is a summary study of the original version of Ramayana produced by Valimiki, nothing of the main body has been left out.

In keeping with the mood of His Divine Grace Srila A.C. Bhaktivedanta Swami Prabhupada, this publication of Ramayana presents the pastimes of Lord Rama in their true glory divided into the original six kandas (cantos); Bala-kanda, Ayodhya-kanda, Aranya-kanda, Kiskindhya-kanda, Sundara-kanda, Yuddha-kanda, Uttara-kanda. Maharaja writes in the introduction:

Again, it must be emphasized that the reading of Ramayana will give greatest benefit if taken not simply as an exciting story, but with the understanding of the supramundane and eternally supreme position of Lord Rama. Those who read with this awareness will ultimately attain the greatest benediction of life, that of going back to Godhead

Sri Rama Navami, the appearance day of Lord Rama falls on 5th April this year. We invite all devotees to enter into the pastimes of Lord Rama by immersing themselves into the pages of Valmiki’s narration of Lord Rama, through this publication. Jay Sri Rama. Hare Krishna.

The book is available in Kindle and print formats at below links.

A pure devotee is like a match, and the recipient the wood. If both are good then there is fire