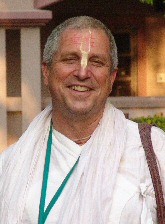 ( commenting to Not a Dry Eye in the House! )

All Glories to your great service to Srila Prabhupada!

The saddest part is that they were unable to find anyone willing to dedicate themselves to continuing the Vaishnava Acadamy for Girls.

They’re right when they give credit to Srila Prabhupada, only he could inspire such dedication and self sacrifice in these two wonderful women. And that’s what made Laxmimoni’s school work, she cared for her girls and was ready to die for her girls. I know many of her graduates and they are all such nice Vaishnavis.

Now I’ll share one of my favorite incidents. A couple of years ago, they brought all the girls to the Mayapur festival. After Mayapur they went to Puri for some time. By the time they got to Vrindavan it was the middle of April and very hot. Now one of my greatest pleasures and services was to take all these young ladies around Braja and make sure they never forget Vrindavan.

My wife, Akuti, came to me and said the girls really want to do Govardhana Parikrama. I said that it’s too hot, neither I can do it nor they will last. If they really want to do it, then we can do it at night when it is cooler. She said, “Great! They really hate getting up early, but they all love to stay up late! They’ll love it.”

So we left in the evening and started our parikrama. Nice cool breezes were blowing and it was really pleasant. I was wondering why there weren’t more people on parikrama as it wasn’t that much after the purnima when everyone goes. I took them on all the secret forest paths rather than on the main road. They were having a great time.

Then we got to Surabhi Kunda. Now this is on the other side of the hill and a little off the secret forest path. You go through a red sandstone entrance way and you’re on the steps down to Surabhi Kunda and the whole world just disappears. My usual thing is after explaining the pastime it to have everyone just be silent for a couple of moments and enjoy the peacefullness of the place. So I asked them to be quiet. Suddenly all we heard was explosions and firecrackers in the distance and this was almost midnight. I couldn’t figure out what was going on and, seeing the puzzled look on my face, Laxmimoni said, “Pakistan lost.” Everyone was rolling with laughter. That’s why no one was on parikrama, they were all watching cricket!

Maybe one or two in the morning, we finished our parikrama that was really AC First Class. Exhausted, but ecstatic, we climbed in the mini bus they had rented from Delhi. We got to the railway crossing and it was closed. Now this bus is filled witharound 18 girls from 13-18 years old. It’s around two in the morning and we all just want to go to sleep. You just imagine their reaction and the moans and groans of such a group.

Then one train went through and the driver being a Delhi-wala and not knowing how things go in Braja, began to honk. I told him to stop as they weren’t going to open till they’re ready. More moans and groans. Then another train went through and the driver honked again to no avail. Then a third train went through, and this time the driver didn’t bother to honk. When the crossing didn’t open again, you can just imagine the reaction of 18 teenage girls who in their minds are already sacked out on the floor of their guesthouse rooms. Then a fourth train came and stopped right in the middle of the crossing! Moans and groans have a really impatient tone now.

The Mystery of the Sweet Manifestation of the Lord in New Mayapur, France