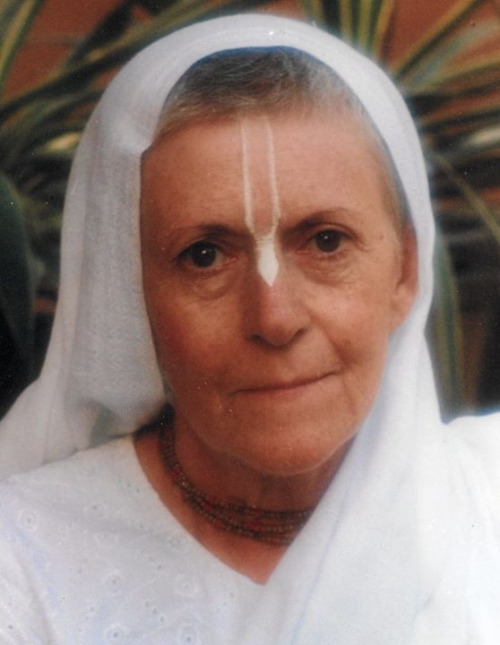 Mother Arca-vigraha’s Disappearance Celebration, May 2, Mumbai (Audio recording of a Skype conversation with Giriraj Swami, Narottamananda Prabhu and others)
Giriraj Swami: Today I had a wonderful Skype call with the devotees in Mumbai in celebration of Mother Arca-vigraha’s disappearance day. My godbrother Narottamananda Prabhu’s talk was especially enlivening and enlightening. How sublime that we all could gather to remember and appreciate and glorify a great Vaishnavi.
Listen to it below or here: https://goo.gl/rjYZHO 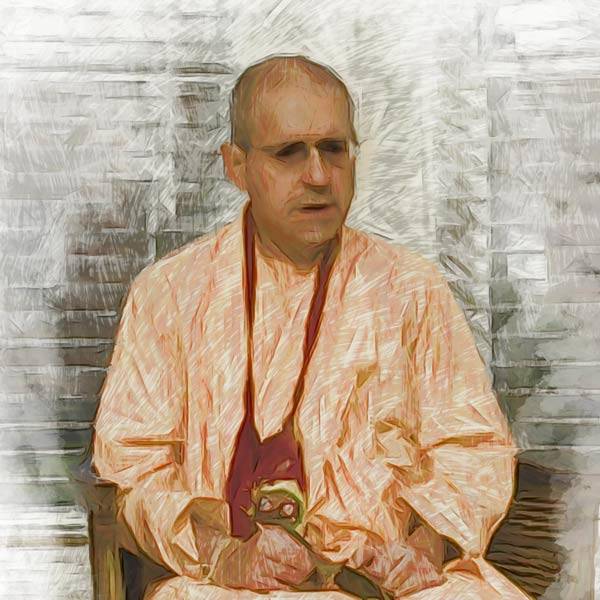 About this time, Jhanu Saptami, in 1994, Arca-vigraha dasi, a renown artist from South Africa, left her cancer-ridden body in Vrndavana. Her desire that other devotees also have a proper facility to spend their last days in the beautiful spiritual atmosphere of the dhama inspired the creation of the Bhaktivedanta Hospice. I tell some of her extraordinary story in a discussion with devotee doctors:

Syama-vallabha dasa: What is your vision for the hospice?

Giriraj Swami: My main impression came from Mother Arca-vigraha, in her last days. Mother Arca-vigraha had been a prominent artist in South Africa, and she built a house in Vrndavana, in Ramana Reti, near the Krsna-Balarama Mandira, to serve as a residence and art studio whenever she visited India. But not long thereafter, she was diagnosed with cancer, and so she sold her lovely home in Johannesburg and settled permanently in Vraja.

She was the first devotee to leave her body in Vrndavana and receive so much attention. Her spiritual qualities attracted many devotees to spend time with her, and her departure became paradigmatic of how to pass away in Krsna consciousness with the support of the Vaisnavas. And she wanted other devotees to have the chance to leave their bodies in the same way, in the spiritual atmosphere of Vrndavana. At the same time, she became acutely aware of the deficiencies in the medical care there. So she wanted us to have what she called a “back-to-Godhead clinic.”

Now, of course, there is more facility for acute care, but then there was very poor facility for acute care, and no system for palliative care. When during the course of her terminal illness Arca-vigraha got jaundice, there was no proper person to treat her. As His Holiness Bhakti Bhrnga Govinda Swami mentioned, Srila Prabhupada’s French disciple Gopaswami Prabhu treated her. As a medical student, Gopaswami had met Srila Prabhupada in Vrndavana, and Srila Prabhupada had told him that he should complete his studies and become a doctor and take care of our devotees there. Eventually, Gopaswami became so enlivened and inspired in devotional service in the association of devotees that he preferred to dedicate himself fully to the practice of Krsna consciousness and to the service of the divine mission in their association. For many years he rendered very valuable service in France; he was the main translator and translated almost all of Srila Prabhupada’s books into French. But in time, years later, he thought of Srila Prabhupada’s earlier instruction. He became a medical doctor and then earned a certificate in hospice care. So, he treated Arca-vigraha. But the local care was very poor. The local people who came could not do an IV properly, and there was no local lab.

But Arca loved just being in Vrndavana. The plot where she built her house turned out to be next to Sivarama Swami and Govinda Swami’s, on a little lane called Radha-Ramana Bagicha, off the Parikrama Marga on the way to the Krsna-Balarama tree. It’s the same lane where Balarama Baba has his ashram. She didn’t have AC, but she had air coolers, which run on water, a fan, and khus. And everything in her house was always spotlessly clean and well maintained. From her bed, through her windows, she could see trees, creepers, peacocks, parrots, cows, and calves. Even when she was bedridden, we would open the windows and she would look out and see the trees and vines and flowers, feel the breezes, and smell the aromas.

Because of her spiritual advancement and sublime qualities, Mother Arca-vigraha attracted a lot of people. People were always coming to visit her, and those with special abilities would offer specialized services. One devotee knew massage, and she would come once or twice a week and give Arca massage. Various types of alternative healers from different countries also came and offered their services, which Arca graciously and gratefully–and affectionately–accepted. It all sort of just happened.

At the same time, Arca had her personal staff, devotees who were there specifically to serve her, headed by Kuntidevi. They took care of the house and grounds, the medical equipment, the laundry, the purchases, and the regular services of cooking, cleaning, bathing her, dressing her, feeding her, and administering her medication. As the cancer progressed, she got exactly what food she needed–simple foods, then soft food, then purees, then juice, and finally just crushed ice.

On the spiritual side there was constant chanting and hearing. Devotees came to do kirtana or chant japa with her, and many, such as Bhakti Bhrnga Govinda Swami, Tamal Krishna Goswami, Sivarama Swami, and Kesava Bharati Maharaja, would come and read to her. Bhurijana Prabhu came every day. And when there was no chanting or reading, a tape would be playing. Arca also had her altar, with various pictures and Deities. And whatever food she ate was always offered. His Holiness Indradyumna Swami allowed her to keep his Radha-Krsna Deities, Sri Sri Gandharvika-Giridhari, and every day Govinda Maharaja would bring over his Gaura-Nitai Deities and sometimes his Govardhana sila.

Arca-vigraha reciprocated with her guests perfectly. Mainly she was just eager to hear and speak about Krsna. But depending on who came, she would give them a sympathetic ear, wise counsel, Krsna conscious philosophy, or even practical knowledge. With as much energy as she had, for as long as she could, she extended herself to others. In her last months, she gave art lessons to the gurukula students (who would also come and perform kirtana for her), she painted portraits of Srila Jiva Gosvami and Krsnadasa Kaviraja Gosvami for their bhajana-kutiras at Radha-kunda, and she did some artwork for Srila Prabhupada’s samadhi. Whoever you were, whatever your mood, Arca was always there to reciprocate.

And there was always a high level of cooperation. As the director of the Santa Barbara hospice, Serenity House, recently told us, that is what attracts people. Not only the patients are touched by the mood of love and care; the staff and volunteers are too. That very positive mood of care and concern for the patients, for their loved ones, for their guests, and for the other caregivers is very, very appealing. I think that is a most important point.

Often, good relations have much to do with good management, with having the right people in the right places, interacting properly. In any machine, if one of the pieces is out of place, it can cause friction. So we have to take care that we have competent management and leadership.

It is really since Arca-vigraha’s departure that I have come to learn about hospice care. Before then I did not know what “hospice” meant, and Arca herself never used the word. Her idea, her desire, seemed to have sprung directly from her experience and realization–from her beautiful heart–that she wanted devotees to have the same facility she had.

At one stage we even considered building small cottages so that devotees could feel that they too had their own place in Vrndavana. That was beyond our means, but we do want to do whatever we can to create a congenial, beautiful, spiritual atmosphere. On the site, we have kept all the trees–so many trees–and that is good. Hospices try to offer patients their own private balconies or patios, their own little areas where they can have direct access to the outdoors, to sunlight, fresh air, and nature’s beauty. So we must try our best to create that sense of home in Vraja.

Vision is a subtle thing, comprising many diverse elements. Our vision, Arca’s vision, is for the hospice to afford devotees the same kind of experience that she had. And this project, drawing all those elements together to make that vision a reality, has been inspired by her, that saintly lady, that great soul, Arca-vigraha devi dasi.

Diplomats and Academics Show Support for ISKCON at European 50th…