1st day of Kartik in Vrndavana, May I be of any service? 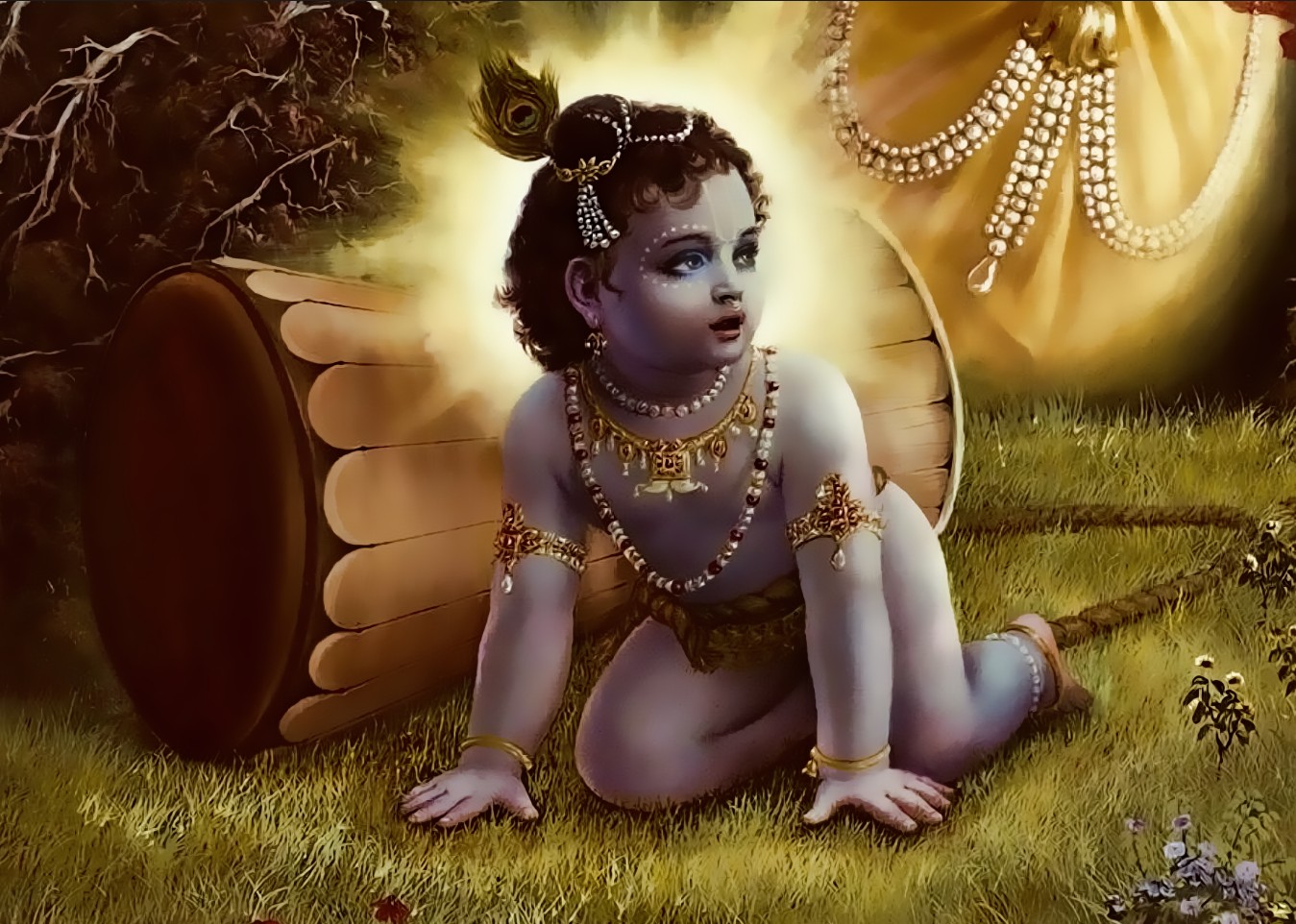 [Srimad Bhagavatam 10:9:1-2 txt] : Sri Sukadeva Gosvami continued: One day when Mother Yasoda saw that all the maidservants were engaged in other household affairs, she personally began to churn the yogurt. While churning, she remembered the childish activities of Krsna, and in her own way, she composed songs and enjoyed singing to herself about all those activities.

Srila Visvanatha Cakravarti Thakura, quoting from the Vaisnava-tosani of Srila Sanatana Gosvami, says that the incident of Krsna’s breaking the pot of yogurt and being bound by Mother Yasoda took place on the Dipavali Day, or Dipa-malika.

Even today in India, this festival is generally celebrated very gorgeously in the month of Kartika by fireworks and lights, especially in Bombay (and in Sri Vrndavana Dhama and ISKCON Temples all over the world). It is to be understood that among all the cows of Nanda Maharaja, several of Mother Yasoda’s cows ate only grasses so flavorful that the grasses would automatically flavor the milk.

Mother Yasoda wanted to collect the milk from these cows, make it into yogurt and churn it into butter personally. She thought that this Child Krsna was going to the houses of neighborhood gopas and gopis to steal butter, because He did not like the milk and yogurt ordinarily prepared.

While churning the butter, Mother Yasoda was singing about the childhood activities of Krsna.

It was formerly a custom that if one wanted to remember something constantly, he would transform it into poetry or have this done by a professional poet. It appears that Mother Yasoda did not want to forget Krsna’s activities at any time. Therefore, she poeticized all of Krsna’s childhood activities, such as the killing of Putana, Aghasura, Sakatasura and Trnavarta. While churning the butter, she sang about these activities in poetical form. 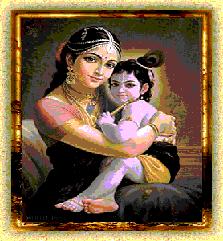 (found in the Padma Purana of Krsna Dvaipayana Vyasa, spoken by Satyavrata Muni in a conversation with Narada Muni and Saunaka Rsi)

“In the month of Kartika one should worship Lord Damodara and daily recite the prayer known as Damodara-ashtakam, which has been spoken by the sage Satyavrata and which attracts Lord Damodara. (Sri Hari-bhakti-vilasa 2:16:198)

In Iskcon Temples around the world and in the homes of devotees…everyone gathers for the entire month of Damodar (Kartika) to offer lamps (candles – dipas) and in great happiness, we sing the glories of Sri Damodara. Check locally for the timings of that ceremony in your nearby ISKCON Temple. Usually it is done in the evening, but some temples and communities perform the ceremony morning and evening.

To the Supreme Lord, Whose form is the embodiment of eternal existence, knowledge, and bliss, Whose shark-shaped earrings are swinging to and fro, Who is beautifully shining in the divine realm of Gokula. Who due to the offense of breaking the pot of yogurt, that His mother was churning into butter and then stealing the butter that was kept hanging from a swing,…is quickly running from the wooden grinding mortar in fear of Mother Yasoda. But, Who has been caught from behind by her who ran after Him with greater speed- to that Supreme Lord Sri Damodara, I offer my humble obeisances.

Seeing the whipping stick in His mother’s hand, He is crying and rubbing His eyes again and again with His two lotus hands. His eyes are filled with fear, and the necklace of pearls around His neck, which is marked with three lines like a conch shell, is shaking because of His quick breathing due to crying. To this Supreme Lord, Sri Damodara, whose belly is bound not with ropes, but with His mother’s pure love, I offer my humble obeisances.
3
itidrk sva-lilabhir ananda-kunde
sva-ghosam nimajjantam akkyapayantam
tadiyesita-jnesu bhaktair jitatvam
punah prematas tam satavrtti vande

By such Childhood pastimes as this, He is drowning the inhabitants of Gokula in pools of ecstasy. He is revealing to those devotees who are absorbed in knowledge of His supreme majesty and opulence, that He is only conquered by devotees, whose pure love is imbued with intimacy… and is free from all conceptions of awe and reverence. With great love, I again offer my obeisances to Lord Damodara hundreds and hundreds of times.

0 Lord, although You are able to give all kinds of benedictions, I do not pray to You for the boon of impersonal liberation, nor the highest liberation of eternal life in Vaikuntha, nor any other boon. O Lord, I simply wish that this form of Yours as Bala Gopala in Vrndavana may ever be manifest in my heart, for what is the use to me of any other boon besides this?

O Lord, Your lotus face, which is encircled by locks of soft black hair tinged with red, is kissed again and again by Mother Yasoda. Your lips are reddish like the bimba fruit. May this beautiful vision of Your lotus face be ever manifest in my heart. Thousands and thousands of other benedictions are of no use to me.

O Supreme Godhead, I offer my obeisances unto You. O Damodara! O Ananta! O Vishnu! O master! O my Lord, be pleased upon me. By showering Your glance of mercy upon me, deliver this poor ignorant fool who is immersed in an ocean of worldly sorrows, and become visible to my eyes.

0 Lord Damodara, just as the two sons of Kuvera-Manigriva and Nalakuvara–were delivered from the curse of Narada and made into great devotees by You in Your form as a baby tied with rope to a wooden grinding mortar, in the same way, please give to me Your own prema-bhakti. I only long for this and have no desire for any kind of liberation.

Glories of Kartika Vrata-Kartik is the best, the purest of purifiers, and most glorious of all months. Kartika month is particularly dear to Lord Sri Krsna.

This month is full of bhakta vatsalya. Any vrata, even the smallest, will yield huge results. The effect of performing a Kartika Vrata lasts for one hundred lifetimes, whereas ordinary vratas only last for one lifetime!

As Krsna says in Gita that He is the month of Nov-Dev, similarly, Srimati Radharani is the holy month of Kartik which precedes His month. Rupa Gosvami and others refer to Radharani as the Kartika-devata or Kartika Devi, in other words, Radharani is the goddess or presiding Deity of the Kartika Vrata.

Daily, one can offer Tulsi arotik, ghee lamp to the Deities in your temple and sing Damodarastakam, bathe in Yamuna if possible, give in charity to devotees, chant 16 attentive rounds or more, read Srila Prabhupada’s Books, attend Morning and Evening Program whenever possible, go on Parikramas, and serve the Vaisnavas.

Do not find faults in others.

Prayer before beginning:
“O Srila Prabhupada! By your mercy, may Radha and Krsna be pleased with my Kartika Vrata.”

Benefits observing Kartik Vrata:
All sins flee from the heart. Perform other vratas one hundred times not equal to one performance of Kartik Vrata. All the holy places will live within your body. Proper performance of Kartik Vrata gives one a million times the result of chanting mantras. Those who worship Sri Damodara in Vrndavana even once… easily attain Krsna bhakti. Dhruva Maharaja attained Hari darsana by worshiping Krsna in Mathura during the Kartika month.

Remember–Kartika Vrata is a special time to worship Radha Damodara, and especially one gets the mercy of Radharani, since it is Her month, and She is very very easily pleased this month… if one worships Her along with Her beloved Damodara.

Pasanukusa Ekadasi Morning: Offer prayer-“O Janardana, O Damodara, O Devesa who are accompanied by Radhika. During the month of Kartika, I will bathe early every morning for Your satisfaction.”

Hear Srimad Bhagavatam daily in association of Vaisnavas. By regularly reading Srimad Bhagavatam during Kartika month, one gets the benefit of reading all the 18 Puranas. All other duties should be given up in favor of hearing from Srila Prabhupada’s Books from devotees during this month.

Give up favorite prasadam for entire month (sweets, salties) Try to eat only once in a day. *If you can do and carry on ordinary works*

No eating honey, eggplant, portal, pickles, red rajma beans, or sesame seeds, or urad dahl (no kichoris)…unless maha prasad is offered to you:)

Daily sing the Damodarastakam, meditating on meaning…..throughout the day.

Daily offer arotik and prayers to Tulsi devi praying for eternal residence in Vrndavana and eternal service at the Lotus Feet of Srila Prabhupada, NitaiGoura, Krsna Balarama, and RadhaSyamasundara. And to the feet of all the assembled devotees…..asking whenver possible, “Prabhu, may I be of some service?”

and taste the sweet feeling of spending the entire month absorbed
in serving Srila Prabhupada and assembled Vaisnavas!

“I am eagerly waiting to see that boy of Vrindavana whose bodily beauty is captivating the whole universe, whose eyes are always bounded by black eyebrows and expanded like lotus petals, and who is always glancing over His devotees and therefore moving slightly here and there. His eyes are always moist and His lips are colored like copper, and from those lips there comes a sound which drives one madder than the mad elephants. I want so much to see Him at Vrindavan!”

O, ocean of mercy, Sri Caitanya Mahaprabhu!
Let there be an awakening of Your auspicious mercy,
which easily drives away all kinds of material lamentation.
By Your mercy, everything is made pure and blissful.
It awakens transcendental bliss and covers all gross material pleasure.
By your auspicious mercy,
quarrels and disagreements arising among different scriptures
are vanquished.

Your auspicious mercy causes the heart to jubilate
by pouring forth transcendental mellows.
Your mercy always stimulates devotional service,
which is full of joy.

May transcendental bliss be awakened in my heart
by Your causeless mercy.
(CC Madhya 10.119)

It’s Kartika, Damn It!
Have you updated your antivirus?