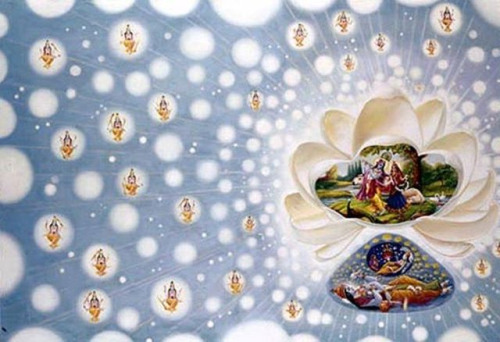 Spiritual world: Please consider yourself invited!
Srila Bhaktisiddhanta Sarasvati Thakura was called ‘a vaikuntha man’. He loved the spiritual world, and sternly cautioned all thoughtful men to NOT accept the pale worldly reflection to be the Reality. His examples in this excerpt below are vivid, his application of the principles which these examples expose is forceful, and his compelling conclusions are NOT how ordinary pious souls view the world. Srila Bhaktisiddhanta Sarasvati Thakura insisted on exposing illusion, simply for the sake of inviting others to consider and experience the Reality. The message is “there is an alternative to illusion.” Please consider yourself invited!
From “Spiritual Morality and Aesthetic Culture” by Srila Bhaktisiddhanta Sarasvati Thakura
There cannot be a well-imagined greater shock to the sense of beauty than the attempt to deck a corpse. The endeavor to decorate the things of this world by means of our mundane resources, is very similar to the attempt to beautify a dead body. The result is a foregone conclusion. Our aesthetic favourite of this moment is discarded at the next in favour of others who also are replaced by others in their turn.
The king who lives in the most costly style has no more liking for the showy splendors of his royal state, when they are not renewed, than the pauper has for his old tattered rags. Familiarity breeds contempt for all things of this world on account of their inherent ugliness which is found out on actual contact. Poets and painters rely upon the equally futile resources of their limited imagination for masking the inherent ugliness of the conditions of mundane existence. Such imagining is not intended to lead us to the reality.
Goldsmith truly hit the function of the worldly poet and artist when he declared that their wisdom consisted in innocently amusing the imagination in this dream of life. The imagination does not want anything that is not new and also not its liking, and its liking is ever directed downward to its kindred point of the flesh, or the corpse. It is not possible even for the imagination to deceive itself regarding the naturally loathsome character of the dead body, the ultimate source of its inspiration. The imagination of man is no more competent judge of his real aesthetic needs than his scientific acumen. Both are directed to mundane objectives which are essentially ugly and unwholesome. There can be no abiding value in poetry unless both the poet and his surroundings are radically changed into entities that do not irresistibly and unaesthetically drag us down to the most rotten things of this world. It is no true poetry that seeks to disguise this fact by the external embellishments of rhythm and vocabulary.
Such ingenuity can only amuse those to whom it is a novelty, and can do so only till the trick does not grow stale. It is the logical nemesis of this state of things that commerce is rapidly getting hold of every department of this make-believe aesthetics. The tailor is making the man, because strangely enough man wants to be made by him in seeming despair of any better alternative.