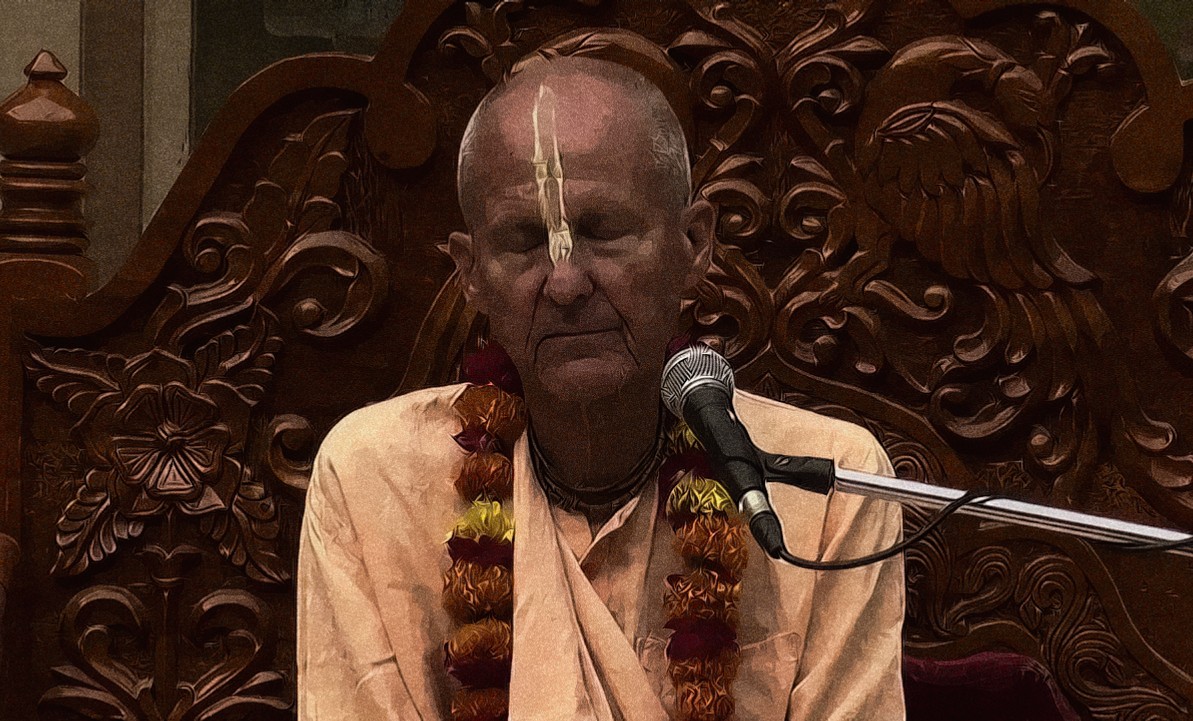 Concern for the environment is considered by many to be very high, even spiritual, consciousness.

The citizens will suffer greatly from cold, wind, heat, rain and snow. They will be further tormented by quarrels, hunger, thirst, disease and severe anxiety.
SB 12.2.11

As devotees we may not realize our responsibility for the current problems nor understand what we can do about it. Are we peforming the sankirtan yajna enough?

When the Hare Krsna mantra is chanted by many men together, the chanting is called sankirtana, and as a result of such a yajna there will be clouds in the sky (yajnad bhavati parjanyah [Bg. 3.14]).

In these days of drought, people can gain relief from scarcity of rain and food by the simple method of the Hare Krsna yajna. Indeed, this can relieve all of human society. At present there are droughts throughout Europe and America, and people are suffering, but if people take this Krsna consciousness movement seriously, if they stop their sinful activities and chant the Hare Krsna maha-mantra, all their problems will be solved without difficulty.
Ref. VedaBase => SB 9.1.17

Headlines like the following are becoming more prominent. Many are admitting the problem, but no one has a solution. Water is Krsna’s energy and devotees have the potential to really do something.

WEST PALM BEACH, Fla. – An epic drought in Georgia threatens the water supply for millions. Florida doesn’t have nearly enough water for its expected population boom. The Great Lakes are shrinking. Upstate New York’s reservoirs have dropped to record lows. And in the West, the Sierra Nevada snowpack is melting faster each year. Across America, the picture is critically clear — the nation’s freshwater supplies can no longer quench its thirst.

• The government projects that at least 36 states will face water shortages within five years because of a combination of rising temperatures, drought, population growth, urban sprawl, waste and excess.
• “Is it a crisis? If we don’t do some decent water planning, it could be,” said Jack Hoffbuhr, executive director of the Denver-based American Water Works Association.
• Water managers will need to take bold steps to keep taps flowing, including conservation, recycling, desalination and stricter controls on development.

Srila Prabhupada spoke boldly and confidently on this subject

“Prabhupada: …sankirtana, then water will come. You haven’t got to do anything. Otherwise the words of Gita will be false. Yajnaih… Yajnad bhavanti parjanyah. The formula is there. You perform yajna and the water will be supplied. They are not performing yajna.
Dhananjaya: So then it’s very important to perform twenty-four-hour kirtana here.
Prabhupada: Oh, yes.
Devotee (2): From that, then, the rains will be produced.

The following is very important. Pleasing Krsna is the essential need. If we work for material benefit, it may not work.

Prabhupada: Yes. But we should not chant for rain. That will automatically come. But you should chant for pleasing Krsna.”

I personally heard this one. I often forget what I hear from Srila Prabhupada, but this statement was spoken with great force and I often remember it. I don’t say that I can apply, but I do remember it.

You may have heard of “Murphy’s Law”. There are many versions of it, such as

Washing your car constitutes a rain dance to the raining gods.
All the laws above were sent by Natalie.
Corollary: washing a car to make it rain will cause a drought.

Here is more from His Divine Grace.

Makhanlal: There’s some rumors that there will be a drought in the United States, a very severe drought.
Tripurari: But by the devotees chanting they would never have to…
Prabhupada: Yes, everywhere.
Makhanlal: Even if there was drought for the nondevotees, the devotees would, automatically wouldn’t have to worry about such a thing.
Prabhupada: [break] …stopped, then your whole business stop. Imagine if these hills were green. How much foodstuff would have been available both for the animal, for the man. All dry, all dry. People should immediately accept this chanting to solve this problem. [break] And the yajna means yajnaih sankirtana.
>>> Ref. VedaBase => Morning Walk — April 23, 1975, Vrndavana

In 1972, the South Indian state of Andhra Pradesh was stricken by a severe drought that affected millions. Hoping that the International Society for Krishna Consciousness would provide assistance, T. L. Katidia, Secretary of the Andhra Pradesh Relief Fund Committee, wrote to Srila Prabhupada. Srila Prabhupada responded with this surprising and edifying letter.

Therefore if you want to perform relief work simply by collecting funds, I think that it will not be successful. You have to please the supreme authority, and that is the way to success. For example, due to the performance of sankirtana here, the rain has begun to fall after a drought of two years. The last time we performed a Hare Krsna Festival in Delhi, there was imminent danger of Pakistan’s declaring war, and when a newspaper man approached me for my opinion, I said there must be fighting because the other party was aggressive. However, because of our sankirtana movement, India emerged victorious. Similarly, when we held a festival in Calcutta, the Naxalite [Communist] movement stopped. These are facts. Through the sankirtana movement we can not only get all facilities for living, but also at the end can go back home, back to Godhead. Those who are of a demoniac nature cannot understand this, but it is a fact.
I therefore request you, as leading members of society, to join this movement. There is no loss on anyone’s part for chanting the Hare Krsna mantra, but the gain is great. According to Bhagavad-gita (3.21), what is accepted by leading men is also accepted by common men.
The sankirtana movement of Krsna consciousness is very important. Therefore, through you I wish to appeal to all the leading men of India to accept this movement very seriously and give us all facility to spread this movement throughout the world. Then there will be a very happy condition, not only in India but all over the world.

Guest (3): Now people… There are drought conditions, people are starving. Cattles are dying. There are no rains.
Prabhupada: Yes, because they are not God conscious, they are thinking like that.

Bhagavan: In France there was a big drought, terrible drought. Many animals died. So the president of the country made a speech, and all he could say in his speech was that people should try to use less water. (laughter)
Prabhupada: Oh. There was another caricature, India. So there was some drought, the same. So there was some, what is called, representation: “And there is no water. We are suffering. This is the difficulty.” “Yes, we are taking step, but next week you’ll have television.” Advancement, television. Because there was no television, so this is the advancement. Next week they have television. As if television will solve the problem. All mudhas, rascals, are very horrible condition. Chant Hare Krsna. There is no other.
Ref. VedaBase => Room Conversation — July 26, 1976, London

George Harrison: There’s been a drought in England, there’s no, very little water.
Prabhupada: This is very dangerous. Everything is now yellow.
Jayatirtha: It’s greener here than most places around, but…
George Harrison: Everything’s so dry this year, lots of trees and things dying without water.
Prabhupada: That is the punishment for this age. It is stated in the Srimad-Bhagavatam. There will be scarcity of rain and there will be scarcity of food and heavy taxation by government. And people will become mad on account of these three things. Anavrsti, durbhiksa, karopi.(?)
George Harrison: It’s getting dryer in England each year. It’s probably going to end up as a desert in another hundred years.
Prabhupada: They expect like that?
George Harrison: Well, I don’t know. I think the whole world’s changing. Somebody said it’s the pollution, leaves so much…, there’s so much of the oceans now with polluted and with oil on the top, there’s not so much evaporation anymore.
Prabhupada: Not in the ocean. It is the sinful activities of the populace. That is real problem. They are all engaged in sinful activities. Especially this innocent animal killing. These are the all reaction.
Ref. VedaBase => Conversation with George Harrison — July 26, 1976, London

Prabhupada: This is the only hope. Kirtanad eva krsnasya mukta-sangah param vrajet [SB 12.3.51]. Throughout the whole world the situation is not very good. Now there is drought, no water. All over the world. I have seen whole Europe, all the fields are now gray, no green. (Hindi)
Krishna Modi: India this year is very good rains. Beyond expectation. And also this crop is very good. (Hindi)
Prabhupada: Parjanyad anna-sambhavah. Nature’s work is there. As soon as there is sufficient rain you get sufficient crops. And yajnad bhavati parjanyah [Bg. 3.14]. Kali-yuga, this age, the yajna is hari-kirtana. Yajnaih sankirtana-prayaih. (Hindi)
Krishna Modi: Who can do this thing?
Prabhupada: We can do that. We can do that. Provided there is cooperation. Now…
Ref. VedaBase => Meeting With Member of Parliament, Mr. Krishna Modi — August 31, 1976, Delhi