Radhanatha Swami’s book shown on the Nasdaq Tower which is… 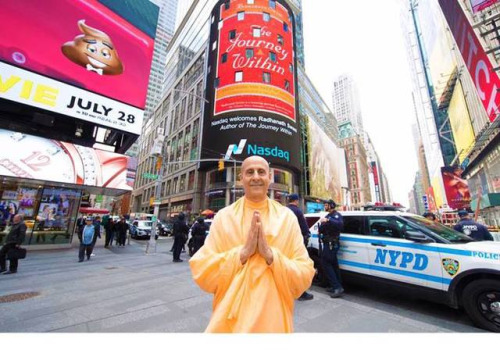 Radhanatha Swami’s book shown on the Nasdaq Tower which is an icon of New York City’s Times Square and the largest stationary video screen in the world, standing seven stories tall.
It is approximately 10,000 square feet and consists of nearly 19 million light emitting diodes. An estimated 1.5 million consumers view the site on a daily basis. Generally, it’s space is rented by Nasdaq-listed companies as a unique and unprecedented platform for promotion. On May 8th, 2017 The Nasdaq Tower featured Radhanath Swami’s New York Times Bestselling book, The Journey Within.
The promotion accompanied by Radhanath Swami’s appearance on Nasdaq Reads an ongoing book series featuring talks with the authors of books about innovation, entrepreneurialism. The Interview was conducted by motivational and lifestyle vlogger Jay Shetty. The live feed of the interview was viewed by 184,00 people on Facebook. You can see the interview here: https://goo.gl/z7Nsnm