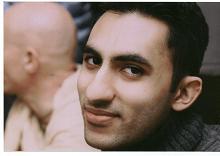 Editor’s note: This article was written for beliefnet.com

A couple of years ago, my wife and I had to catch a flight immediately following a religious observance at our local temple. Minutes after the last ceremony ended, we jumped into a cab and raced straight to the airport. A testament to both the power of prayer and New York cabbies, we arrived with time to spare.

As the airline representative typed in our names, I noticed her fascination with our appearance. It was not entirely surprising: I wore a cream-colored dhoti and kurta–loose fitting traditional Indian clothes that most people simply call “robes.” My wife looked elegant in her sari, brightly colored silk wrapped so that the end came up as a head-covering. Around her neck she wore a flower garland, consecrated at the temple, now shedding rose petals wherever she stepped. Markings of bright yellow tilak, sacred clay used to anoint the body, decorated our foreheads. The final touch: on my way out of the temple, I had grabbed some magazines to read on the plane, and I now held these as if poised to start handing them out at any moment.
“Excuse me sir,” the representative finally said, “But I was wondering about your clothing. Is it part of your religion?”

Here we go, I thought. I braced myself, looked her in the eyes, and decided to not pull any punches. “Yes. Actually, we’re Hare Krishnas.”

There, I said it. We’re Hare Krishnas. At the airport.

“Pardon me? Harry Christians, you say?”

I repeated myself, but it didn’t ring a bell.

She couldn’t be serious. Here we were: flowing robes, flowers, even leaflets. At the airport. If there was such a thing as a Hare Krishna stereotype checklist, ours was well filled out.

“You know, as in the song?” I said, beginning to chant, “Hare Krishna, Hare Krishna, Krishna Krishna…” My wife let me sing a few bars before gently informing me that I was both off-key and making a scene. I offered a more subdued explanation of the Krishna tradition as the woman handed us our boarding cards.

Loved, hated, or–if my airport experience is any indication–simply unknown, the Hare Krishna movement has spent the last 40 years trying to find its place in American society. The movement represents the ancient Vaishnava faith, a monotheistic Hindu denomination, transplanted and brought to the West by Srila A.C. Bhaktivedanta Swami Prabhupada. The 70-year old holy man arrived in New York City carrying $7 in rupees, a trunk-load of scriptures, and a mission to introduce the Western world to Lord Krishna. The swami converted a Lower East Side storefront into one of the first Hindu temples in America, and in July of 1966 formally incorporated his fledgling organization as the International Society for Krishna Consciousness (ISKCON).

Divine arrangement not withstanding, Srila Prabhupada’s American arrival owed something to the Immigration and Nationality Act of 1965. Reversing decades of exclusionary immigration policies, the act welcomed in a wave of Asian immigrants. My mother–then an unmarried, headstrong nursing student with dreams of studying medicine in the United States–was among a handful of early Indian immigrants who also heard, in the new law, whispers of opportunity calling across the ocean. And so, a few months after the swami had formed ISKCON, my mother’s first airplane ride brought her, ears popping and eyes wide with wonder, to the same city.

By the mid-1970s, Prabhupada’s mission seemed a success. He had opened more than 100 temples, published scores of academic volumes, and circled the globe 14 times to share devotion to Krishna with millions of men and women. My mother’s dream of becoming a doctor, meanwhile, took a detour: she got married and starting raising a family instead. When Srila Prabhupada passed away, in November of 1977, my mother was already pregnant with me, her second child.

Despite the similarity in their arrival dates, little else seemed to bind the swami and my mother. She had come here to learn, to soak in what it meant to be an American, and to create a financial foundation for herself and her future family. Prabhupada came to teach, to share with the world what it meant to be a devotee of Krishna, and to create a spiritual foundation for thousands. Through years of parallel existence, their paths never intersected.

Until, of course, I became a Hare Krishna.

I grew up trying to be a good Hindu-American—which probably would have been easier if anyone knew what that meant. Without the luxury of a definition, though, I defaulted to walking a tightrope between two seemingly incompatible aspects of my life. In public school I learned to celebrate the holiday season by making paperclip Christmas ornaments and spinning plastic dreidels. At home, we rang in Diwali, standing reverentially before our kitchen cupboard makeshift altar, offering diyas, ceremonial candles, to deities and garish pictures cut out of Hindu calendars–feeling tinges of guilt for offering the diyas quickly enough to run off and watch TV.

The tightrope act came crashing down, however, with the release of “Indiana Jones and the Temple of Doom,” Hollywood’s cruel way of outing Hindu-American children everywhere. Suddenly that gross caricature of my religion forced me to spend countless hours assuring my classmates–and more than one teacher–that people in my religion did not actually dine on monkey brains. But if I bear a grudge, I also owe a debt to the film: In its fallout, I began to question what it meant to be a Hindu.

That question would lead me to encounter profound truth in Srila Prabhupada’s books and the practice of the Hare Krishna devotees I met. ISKCON offered me, among other things, a way to reconcile the faith of my upbringing with its practical application in a contemporary, pluralistic world. I was initiated into the movement at 19, and, eight yearrs later, the principles and values of Krishna consciousness continue to inform everything I do. In ISKCON I’ve found a place to live an integrated, spiritually centered life.

It is not always easy. Being a part of ISKCON means that I have to confront its challenges and shortcomings. Some of these, like knee-jerk accusations that the movement is a cult, seem like the grown-up version of the lunchroom conversations I was forced to endure as a child. Others, however, require more thoughtful exploration of the ways in which ISKCON has failed to live up to its own ideals. The over-zealous preaching of the movement’s early converts often fostered a mood of fanaticism and erected barriers between devotees and the mainstream. Following Prabhupada’s passing away, power struggles between leaders and a handful of independently ambitious disciples threatened to splinter the movement, and ISKCON has had to deal with members–some in leadership positions–who deviate sharply from the tradition’s spiritual and ethical principles.

It reminds me of the fact that, like me, ISKCON has come of age walking tightropes, straddling two worlds, experiencing growing pains and learning from its (sometimes ugly) mistakes.

The biggest challenge to my faith, perhaps, came when I began to hear the allegations that Hare Krishna children were abused in ISKCON-run boarding schools in the 1970s and 1980s. Having forged close friendships with many second-generation Krishna devotees–some of whom were victims of that abuse–I heard first-hand accounts that drew my tears and indignation. Stripped of the ability to depersonalize it, I had no choice but to face the fact that abuse does not discriminate. Whether ISKCON or Christian, religious or secular, American or the Indian culture of my own upbringing, we are all susceptible. For me, the question was not whether or not there had been abuse in Krishna schools; I wanted to know what ISKCON was doing about it.

Here, I found something unexpected: honesty. The movement’s leadership acknowledged the tragedy, chose to air their own failures publicly, and promised action. ISKCON established a professionally-staffed Child Protection Office to investigate, screen against, and educate communities about abuse. The movement also settled a lawsuit for $9.5 and is in litigation to get more money to compensate every victim. ISKCON’s response is far from perfect. Yet it is a response that attempts to accept responsibility, and it does so with humility and integrity.

Integrity is a powerful force. It was the promise of a workplace steeped in integrity that drew me, after graduating from law school, to accept a position with the Queens County District Attorney’s Office in New York. And it was ultimately that same promise that caused me leave the D.A.’s office in 1005 in favor of a full-time position as ISKCON’s Director of Communications.

The opportunity to do meaningful work combining my spiritual and vocational aspirations was alluring, but I still had my doubts. Would I have enough faith in ISKCON–the institution, its people, and its ideals–to dedicate my career to it? I went to my mother for advice. She looked at me with a twinkle in her eyes–a twinkle I suspect was there 40 years ago when she stepped off the plane–and gave me her blessings to take a leap of faith.

I realize that the ISKCON I joined–the ISKCON that I choose to live and work in today–is, in some ways, dramatically different from the one which commanded headlines three or four decades ago. My ISKCON is one which celebrates families and communities, values tolerance and compassion, helps its devotees balance fidelity tradition with the reality of life in contemporary America. I fell in love with my wife, a second-generation devotee born and raised in the movement, in this ISKCON; when we have children of our own, we hope to raise them in this ISKCON, as well.

Forty years later, I stand as the beneficiary of two journeys that were, perhaps, moving towards the same center all along. Where my own journey will take me, 40 years from now, is a question best left unanswered. In the meantime, I am humbled, excited, and grateful to play my part.

Ananya-bhak-without deviation!
For Whom Does Hinduism Speak?

6 Comments to “ My Krishna Consciousness”