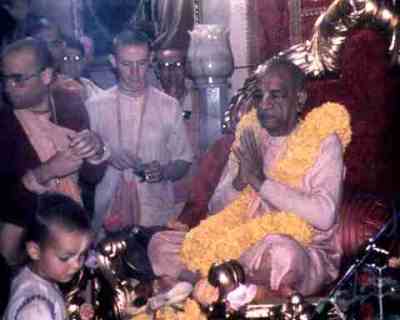 Tuesday the 13th of November is Shrila Prabhupada’s disappearance day from this mortal world and his return to the Nitya-lila. It is the 30th anniversary. Wow—that is close to half my life!! How things have changed for me, in the lives of so many devotees present then, and in the Movement.

I was a young man of 27 years, and now I am 57. I became a devotee at 19 1/2, so really I had about 6 1/2 years of him being physically present. During those years most of us never considered that he could leave us at any time, though he did remind us of this fact. Somehow we just expected him to always be present with us. If only I would have known!

Frankly I wasn’t really able to properly take advantage of his company when he was here. I was too young—immature really—and not eager enough to put relevant questions to him or to be personally motivated to serve the mission from my own realization. My necessity for making spiritual advancement was weak, and truly, necessity rules our life.

I saw Prabhupada perhaps 5 or 6 times, and have some endearing experiences. Yet I have to admit with embarrassment, that when Prabhupada disappeared from my life I didn’t shed a tear. Why? There are many reasons of course—like being hard hearted. Yet I also had the realization that my life would remain the same as it always had been, namely with his disciples–my Godbrothers and Sisters.

Looking back—as is so important on these day—I see clearly that I was more of a religious person caught up in the externals of worship (form), rather then a deep spiritual thinker anxious and intent to make progress in loving Krishna. My life is a lesson for all devotees, that we have to intensely pray for and desire to make spiritual progress. Otherwise we can spend years or even lifetimes with little spiritual understanding.

So because of the fact that I wasn’t able to truly appreciate the significance of Prabhupada association, those days were not for me “the good old days”. I do have fond remembrances of those pioneer days, and we all have our stories. Hearing Prabhupada lila is also nectar, and inspires us. However, I reflect soberly that today is all we have, and that will determine our tomorrow. I have to be Krishna conscious and put into practice what Prabhupada taught me today. We can and should learn from the past, but we can’t live there.

The guru teaches us in so many ways: by his life, instructions, example, and writings. And also he teaches us and tests us when he leaves the planet. In effect the guru physically leaving the world says to the disciple: “What have you learned, or really realized about what I taught you?”

From my perspective during Prabhupada’s manifest time with us, we were able to coast (not that it was easy) on his coattails, empowered by his sakti to do things beyond our capacity and realization. Then before we knew it, he appeared to leave us, and we would have to sink or swim on our realization of his presence and teachings in our lives and hearts. Many didn’t fare well. Some of us floundered. Others appeared to disappear.

Although it was very good for us, with profound possibilities, Prabhupada’s disappearance was a severe test. Could we be motivated in the same way or even more, when we didn’t expect to see him again to inspire us with his presence, smile, or to correct us? We were now pushed out of the nest, and forced to try to fly.

And we came crashing down to the our new reality of the earth and found ourselves looking up from the dust at where we thought we were spiritually. That was my position, as I had to dust myself off, and rethink my life in every way. This was the most difficult time of my spiritual life. It has taken me many years to feel back on track, yet I am more solid now, deeper, real, and more serious. As our Godbrothers and Godsisters begin dying off, so to speak, they teach us to see what is really important. I have a number, and my time is fast approaching.

Another year, and what have I given back to Prabhupada and all the devotees? It is late in my life, but not too late, to become the devotee Prabhupada, our Guru Parampara, and our dear Lord envisioned for me. I feel optimistic for my future, and I believe in being a possibility thinker. This time is the best time of my life.

On this day let us all be inspired to make spiritual advancement, to appreciate the power of sadhu sanga (saintly association), and to give back our life energy in gratitude to Prabhupada and the mission of Shri Chaitanya Mahaprabhu! Shrila Prabhupada kijaya!