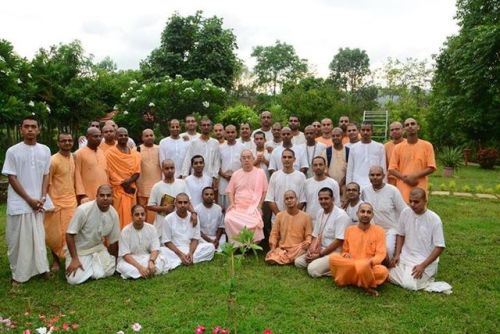 A two day retreat by HH Bhanu Swami on Bhakti Rasamrita Sindhu and the Sandharbhas (Album with photos)
HH Bhanu Swami had visited Govardhan Ecovillage on 2 nd June and had given seminars on Rupa Gosvami’s work, Bhakti Rasamrta Sindhu; Madhurya Kadambini of Srila Visvanath Cakravarti Thakur and Tattva-Sandarba of Jiva Gosvami. The 2-day retreat was held in the seminar hall of the Satsang Bhavan and was well attended by the students of Bhativedanta Vidyapitha and the resident monks of Govardhan Ecovillage.

Maharaj spoke on the meaning of Bhakti Rasamrta Sindhu and the introduction to Rupa Gosvami’s work. The book is compared to an ocean which is having four sides: The Eastern Ocean, the Southern Ocean, the Western Ocean and the Northern Ocean. In the Eastern division, there are four waves. Maharaj spoke briefly on the Eastern division which explains the definition of pure bhakti and its various stages. The stages are sadhana-bhakti, bhava-bhakti and prema-bhakti. He then spoke briefly of the Southern division which tells about the auxiliary bhavas which aid to exchange of rasas.

Maharaj then spoke on Madhurya-Kadambini of Srila Visvanath Cakravarti Thakur which is divided into 8 showers. The text speaks of the Supreme nature of Bhakti above all and Bhakti being ultimate. The showers explain the various stages of Bhakti from sraddha upto prema for the vaidhi-bhaktas and also for the raga-bhaktas.

Lastly, Maharaj spoke on the Tattva-Sandarba of Jiva Gosvami. He spoke on the meaning of Sandarba and how the Srimad-Bhagavata Purana is the essence of all Vedic literatures.
Find them here: https://goo.gl/qaZayo