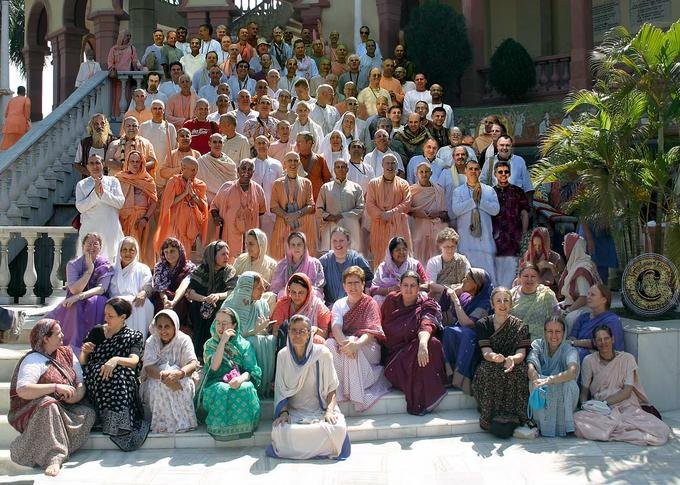 Learning to appreciate the devotees is a Vaisnava etiquette that helps us in our quest for purification, especially the appreciation of senior devotees.

I have always been slow to understand this but as time passed I began to develop a certain admiration for those devotees who came before me. This is due largely to the fact that I have become a senior devotee.

I can’t say that I always act like a senior devotee so I guess I am senior by default, simply because of time only. But the arrogance and offensive behavior I showed senior devotees when I was a new devotee frightens me even today causing me to wonder how I ever made it this far in devotional life. As I reflect upon the many years behind me I consider myself very fortunate to have been surrounded by so many senior devotees, most of whom were disciples of Srila Prabhupada.

Though I could not understand it at the time, being around these strong personalities helped to make me strong through all the rough times I would have to face in the future. Still I sadly remember treating these rare souls as though they were my equal. I had no idea who they were and to some degree today, I still remain in ignorance of who they are. And even sadder it is, that I didn’t even know what services they performed or the austerities they endured while serving Srila Prabhupada.

Many did not have a proper place to sleep or proper meals and almost all lacked warm clothing. Some were Srila Prabhupadas personal servant; some were temple presidents while others did book distribution for years. All of these I have not done and truthfully, could never do. Being a devotee for a number of years I feel I have a lot to give but so did these devotees and my foolishness stopped them from giving me what could have made me a better devotee. If only I had the wisdom then to sit before them and just listen with respect I would be much richer in spiritual insight today.

Now many of them are gone, the opportunity is gone and I sit here lamenting over the fact that I was given a great treasure and lost it. Such a valuable asset sat before me within arms reach, day after day, year after year and I squandered it. They would have handed me years of experience and knowledge but because I acted like a silly clown the doors were closed. Had I even a small amount of humility then they would have opened up their hearts to me and my spiritual advancement would have taken giant steps. Had I even tried a little bit to serve them with but a token amount of submission the road to my spiritual journey would have been so much easier to travel.

I actually feel bad when devotees around me mistakenly judge me about the amount of service I rendered in the past. Perhaps the senior devotees I mistakenly judged felt the same way. I can surely say that I cannot match the immense service the devotees rendered to Srila Prabhupada, nor can I say that I suffered so many setbacks as did they. I cannot say that I could even pass the extreme tests that they did when encountering problems in India or preaching amidst deprogrammers.

It was they that struggled so hard so that I would have a temple to go to in India, it was they that sweated day and night so that I had one of Srila Prabhupadas books to read and it was they that I saw on the streets singing Hare Krsna that inspired me towards spiritual life. Had I only a small amount of appreciation for these brave souls for their sacrifices, their stories would have steered me clear of so many personal setbacks of my own.

If for one minute I could have thought that it was possible that they knew more than me and acted accordingly, their loving advice would have saved me many tears. Happily, by Krsnas grace it is not too late to dive into the open hearts of these advanced devotees taking advantage of their deep realizations. Somehow, I have learned, that they do know more than me and they are more advanced than me and it will be by their kindness that I am able to take a few steps closer to Krsna. And what about the steps I have already taken, are they not the mercy of senior devotees?

They have certainly blessed me with their realizations and it is a wonderful feeling. So now I am learning to act so that they will welcome me into their association and accept whatever little service I offer them. My offenses to them caused them to turn away from me and it hurts and thus my realizations are, that the lost of devotee association is the greatest tragedy in this world. There is no greater lost or misfortune than to find oneself in separation of their friendship.

I have also learned to open my heart to them, in turn they have greeted me with love and affection. Looking at my own actions to my junior devotees I think that I have not equaled the kindness afforded me from Srila Prabhupadas disciples. I need these devotees; I need them to advance in Krsna consciousness.

I need them to stay afloat in spiritual life. When I came to ISKCON everything was there, the morning program, the deities, the books and the temples. Had it not been for them I would not even have a place to live. Maybe they will forgive me one day for having neglected them for so many years and not appreciating the sacrifices they made.

So let me now offer my most humble obeisances to all the disciples of Srila Prabhupada, no matter who they are for they are certainly very dear to Krsna having served His pure devotee Srila Prabhupada, when love was the only motive.

Segments of life: Looking at death under another perspective

2 Comments to “ Appreciating the senior devotees”