Are we, as an organization, for or against the death penalty? The answer might not be as simple as it appears, and either way, might involve some danger. 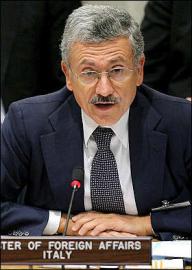 Recently Italy’s foreign minister, Mr. Massimo D’Alema, was at the United Nations in New York to push for a worldwide moratorium on the death penalty. There is a rising movement, centered in Europe, claiming that the death sentence is brutal and anachronistic, even barbaric. I don’t doubt the good intentions of these leaders (which count among themselves eminent religionists, like the Pope); their efforts stems from humanitarian reasons, but unfortunately, they are unaware of the details of the law of karma and ignorant of the dynamics of the transmigration of the soul.

I know devotees in Western Europe who decided that if asked by the media, they would answer that in general we are against the death penalty (that is, if only a short answer were requested; otherwise, they would be open to say that for certain crimes, and when the guilt is beyond doubt, the death penalty could be appropriate).

These devotees sense the risk of being branded as cruel fundamentalists. They also say that, yes, the death penalty is Vedic—it’s in the scriptures, and certainly there’s no philosophical reason to, in principle, be against it, but to apply it properly it would take a judicial system manned by wise judges, who won’t be swayed by corruption or political considerations; since in most countries the judiciary isn’t properly qualified, the death penalty should be suspended.

I see problems in that stance. That certain criminals, such as murderers, should be killed is not contigent upon having ideal kings or ideal judges. In any punitive decision there’s a decision to enforce pain and retract liberty. Indeed, what judge is perfect? So should we challenge the legitimacy of every sentence passed by every judiciary in the world? Should we doubt the competency of every judge on the planet and relativize all their conclusions?

More importantly, it was not for some hypothetical leaders of bygone ages that Srila Prabhupada wrote his books; rather, they are meant for guiding and informing the decision of modern men and women, including rulers and judges.

Consider the following: “A life for a life is just punishment for a person who cruelly and shamelessly lives at the cost of another’s life. Political morality is to punish a person by a death sentence in order to save a cruel person from going to hell. That a murderer is condemned to a death sentence by the state is good for the culprit because in his next life he will not have to suffer for his act of murder.” (Srimad-Bhagavatam, 1.7.37, purport)

These instructions are also applicable today.
We could actually welcome the raising of the death-penalty issue as a chance to promote the views and standards of Srimad-Bhagavatam.

Although there might be a laudable element of caution and diplomacy in the devotees who choose an anti–death-penalty stand, I suspect an influence of cowardice in the choice, a fear of boldness, and a preferring to “go with the flow.” Yes, we might gain some temporary approval: “The Hare Krishnas are progressive too—very good!” We might win the day by pleasing the public, but later on we might encounter more obstacles; for instance, scholars, journalists, and thoughtful persons will one day come across passages in Srila Prabhupada’s books such as:

“According to Manu’s law, when a person commits murder, punishment is beneficial for him because if he is not killed he might commit more and more murders and therefore be entangled in his future lives for having killed so many persons.” (Srimad-Bhagavatam, 4.6.4, purport)

This and other similar purports won’t disappear, nor change with changing times. Hence one day we might be accused of hypocrisy and disloyalty—and then have to explain that.

Let’s not forget that we have strong reasons that, once properly contextualized, could well appeal to the merciful—for instance: “Such a death sentence for the murderer is the lowest possible punishment offered to him, and it is said in the smrti-sastras that men who are punished by the king on the principle of a life for a life are purified of all their sins, so much so that they may be eligible for being promoted to the planets of heaven” (Srimad-Bhagavatam, 1.7.37, purport)

Wow, heaven! So the killer is executed and might go up to paradisiacal realms!

The modern “humane” approach sends the culprit to jail to suffer (often in hellish conditions) for a number of years, and then, at death, he still might even have to go to the “real” hell.

Which of the two approaches is more charitable and merciful?

Of course the superiority of the death penalty might be difficult to explain to the advocates of (apparent) clemency, especially when their endevors take the flavor of a crusade of righteousness. But isn’t one of our roles in society to explain things as they are, even if they be difficult to present to the uninformed?

Due to the historically recurrent tendency of priests to go along with current trends, to avoid censure and the loss of support and approval, I am simply concerned that we don’t choose the easy way out regarding such a morally sticky issue as the death penalty. I respect the deliberation of devotees who prefer a more moderate stand on this issue—their camp counts highly respectable and advanced Vaisnavas, whom I revere—but I see danger in presenting a positition that risks being too conditioned by circumstantial, relative factors. I also see the danger of our movement coming to a point of having directly opposite positions in different countries: anti–death-penalty in the West, and pro–death-penalty in those nations whose traditions and laws uphold it, and that, understandably, have no intention to concede to the anti-death-penalty campaign.

How would I answer if a TV interviewer were to ask me whether I am for or against the death penalty? Of course it would depend on how much time I was allowed, and on the nature of the program, but possibly I would say something like:

“I am against the death penalty—for animals and unborn children. As far as adult humans are concerned, we can discuss what cases the death penalty may be appropriate for. The tradition to which we refer extols the benefits of the death penalty, not only for society, but indeed also for the criminal—when properly applied, of course. But in general, I suggest that before drawing conclusions on the death penalty, we discuss and understand exactly what is death and what is life. Otherwise, our decisions might well be dictated by dogma, prejudice, and superstition, not by knowledge, and as a result, despite our good intentions, we might end up doing more harm than good.”