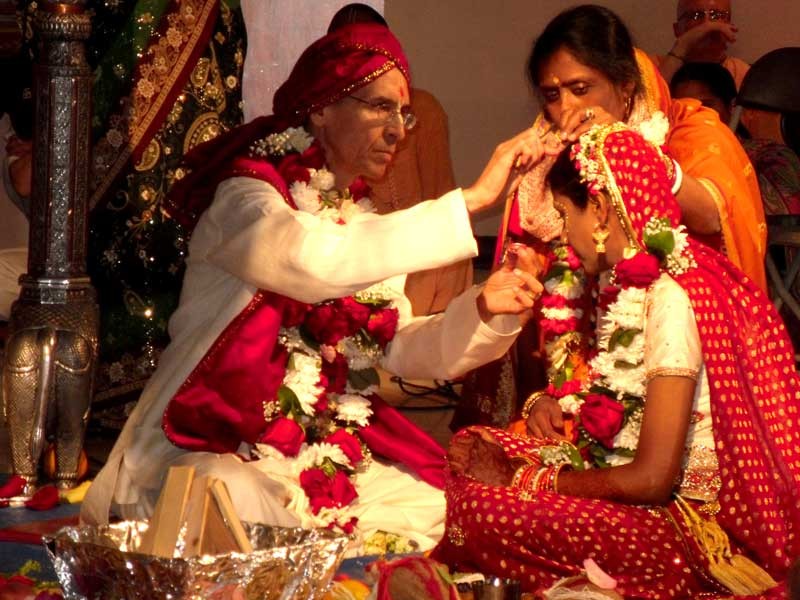 The grhastha asrama has had an interesting and varied history within our ISKCON movement. In many respects the role of married life in a missionary movement does not exactly fit like a hand in a glove. That said Srila Prabhupada was excited by his renounced grhastas and very proud of them, the initial preaching in London being a prime case in point. He also loved and encouraged his less renounced grhastas but generally suggested a different devotional path for them, particularly if they had children and were desirous of a few extra creature comforts. Often he suggested that they should live outside and support the preaching mission in whatever way they could.

“If you want to marry, you work independently. Maintain yourself. And whatever you can contribute, do that. That is the… Just like Abhirama. He’s very good. And I don’t want to be lost. He constructed that house, I never forbade. And it is in the campus. Let him remain a little separately. It doesn’t matter”
RC July 17th 1977

Whether a fully renounced grhastha or a slightly less renounced one, the vast majority of our grhasthas were brahmacaris and brahmacarinis before marrying. Prior to taking their marriage vows, practically their only focus in life was their service to guru and Krsna.

During Srila Prabhupada’s physical presence he was naturally the main focal point for his disciples both male and female. As we know Srila Prabhupada very much expected his married disciples to remain that – married, indeed he was very upset when he learned of marriages breaking down. While there isn’t one simple explanation for failed marriages in ISKCON, during Srila Prabhupada’s time at least, it was probably more as a result of little or no research into the compatibility of couples before getting married. Or maybe because the couple did not have enough association after their marriage to develop a lasting relationship maybe due to service commitments, thus finding themselves drifting apart. Or maybe it was an immature understanding of both the importance and spiritual nature of the grhastha asrama.

One reason I’m sure we can all agree on is that marriages did not suffer during Srila Prabhupada’s time as a result of him being seen as anything other than the eternal guru and father of his disciples.

“Sukadeva Gosvami was a young boy sixteen years old, and therefore all the parts of his body were developed. He was naked also, and so were the ladies. But because Sukadeva Gosvami was transcendental to sex relations, he appeared very innocent. The ladies, by their special qualifications, could sense this at once, and therefore they were not very concerned about him.”
SB 1.4.5 purport

Hence there was essentially no question of a disciple entertaining the thought of Srila Prabhupada ever being anything other than their transcendental guru life after life. Even if other thoughts entered their minds, the fact of the matter was that Srila Prabhupada was never going to be affected by such thoughts. We only have to read Srila Prabhupada’s conclusions on such a scenario:

“So sex life is not forbidden in this Movement, but hypocrisy is forbidden. If you become hypocrite then there is no way. That is Caitanya Mahaprabhu’s teaching … So our request is, ‘Don’t be hypocrite.’ There are four asramas: brahmacari, grhastha, vanaprastha, sannyasa. Whichever asrama is suitable for you, you accept. But sincere, don’t be hypocrite. If you think that you want sex. Alright. You marry and remain like a gentleman; don’t be hypocrite.”
SPL 23rd May 1976

However since Srila Prabhupada’s physical departure, the dynamics have changed somewhat. Specifically some of those dynamics are that our present gurus are not on the same level of spiritual purity, strength and realization as Srila Prabhupada. This of course is in no way a slight on our gurus and leaders, rather they are to be commended given that they have stepped up to such a monumental challenge of preserving the parampara. Another changed dynamic is the current age difference between our gurus and their disciples which is generally much less than they were between Srila Prabhupada and his disciples.

Hence we are now in new territory. In traditional vedic society this territory didn’t have to be negotiated, as the husband was more or less the only guru of his wife. However Srila Prabhupada adjusted that traditional model, hence we have to work with that adjustment and make it a success. There is no reason why we cannot be successful in this endeavour but we have to be vigilant and conscious of the potential dangers. Given that we have had to deal with a number of problems over the years in this area that certainly helps with being aware of the inherent dangers. So these kinds of problems can only really arise where there is a combination of a lack of vigilance mixed with the attraction that some have, knowingly or unknowingly, to develop a relationship with devotees in positions of authority.

However that is not the main focus of this essay. The main theme I want to raise is that regardless of whether such relationships develop to the point of fall down, on the subtle level, if a married woman is more impressed by and dedicated to, their guru, than their husband, it can have a devastating effect on their marriage. This phenomenon impacts both on current unions, as well as future marriages.

Given the vast majority of devotees get involved with ISKCON prior to being married, they naturally don’t focus on married life initially. Rather as they take seriously to the Krsna conscious process it is not long before they focus their attention on whom they might eventually choose as spiritual master. Once they make that decision the general tendency is for them to manifest ekena manasa, one pointed attention, in regards to serving and pleasing their spiritual master. From many perspectives this is quite natural and indeed it could be argued that it is an essential requirement in one’s spiritual development. However it can lead to being less than conducive for the development of healthy marriages, which is a real problem given that most devotees do eventually get married.

And when they do marry some face an interesting challenge, those who are faced with the ‘no-one can compare to my guru syndrome’. This syndrome inevitably determines that the husband is not as renounced, intelligent, knowledgeable, learned or charismatic as the guru. This significantly disempowers the husband from the get-go and rather than starting married life from the lofty heights of being considered a guru-pati, he finds himself firmly rooted in the role of second class citizen. Hence he is forever playing catch up as far as trying to win the affections and respect of his wife, who long ago committed both of those essential items to her guru. Thus the odds are stacked against the husband winning his battle to catch up, and whether the guru is or isn’t more advanced etc., the husband has the ‘disadvantage’ of living with his wife on a daily basis, whereas the guru only sees her maybe a few times a year, which tends to only add to the mystique.

So, how to inject some realism and thus hopefully rectify this anomaly in our society? In order to affect real change those in positions of authority need to dampen down the excessive expression of apparent devotion that some disciples manifest. They need to be proactive in injecting sobriety, maturity and conservatism into these relationships. In addition proactive preaching vis a vis the importance of the grhasta asrama and how following the dharma of the grhasta asrama is equally glorious vis a vis all the other asramas would be most helpful:

“Srimad Bhaktisiddhanta Sarasvati Maharaja Prabhupada. He was creating more brahmacaris and sannyasis for preaching work, but I am creating more grhasthas (applause), because in Europe and America the boys and girls intermingle so quickly and intimately that it is very difficult to keep one brahmacari. So there is no need of artificial brahmacaris. It is sanctioned. My Guru Maharaja wanted to establish daiva-varnasrama. So married life is called grhastha-asrama. It is as good as sannyasa-asrama.”
Bg. Lecture 7.3 Bombay 29 March 1971

“After twenty-five years a brahmacari is trained to refrain from sex life. That is brahmacari. But if he is still not able then he’s allowed to accept grhastha life. Then there’s no cheating, hypocrisy, that I proclaim myself as brahmacari or sannyasi and I secretly do all nonsense. The hypocrisy life will not make one advance in spiritual life. That is the example given by Sri Caitanya Mahaprabhu. … ”

Prabhupada detailed Chota Haridasa’s moment of weakness and described the stern response of Lord Caitanya. “Caitanya Mahaprabhu knows everything. Sometime after, He inquired, ‘What about Chota Haridasa?’ Somebody said, ‘Oh, You rejected him and, out of disappointment, he has committed suicide.’ ‘Oh! That’s nice!’ Just see how strict, ‘That’s nice.’ He never expressed any sympathy, ‘Oh, I rejected this person and he has committed suicide? Oh.’ No. He said, ‘Oh, that’s nice. That’s all right.’ He said that.

“This is one thing. Another thing: Sivananda, one of His very exalted devotees, was taking care of all devotees who had come to be with Caitanya Mahaprabhu during Ratha-yatra. So his wife came and offered Caitanya Mahaprabhu obeisances and He saw that the wife is pregnant. So He immediately asked Sivananda, ‘Your wife is pregnant?’ ‘Yes.’ ‘All right. When you see the birth of this child you keep his name like that.’ Just see. One man, simply he saw with lusty desire to a woman, he was rejected. And one man has his wife pregnant, He adored him, ‘That’s all right.’

However we will struggle to free our society of hypocrisy if we do not give the proper respect to the grhastha asrama. The first step in respecting the grhastha asrama is to ensure that the married couple have the utmost respect for each other and that their relationship does not have misplaced affection directed toward a third party in the guise of guru seva.

NBS#28 The Transcendental Nature of Kardama Muni. In...
The Resurgency

28 Responses to “Protecting Our Future”