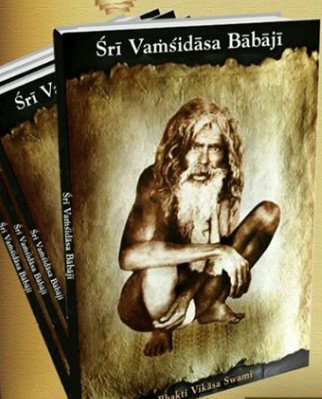 Srimad Bhagavad-gita (BG 9.13) declares that devotees of the Lord even though situated in the material world are actually under the spiritual energy of the Lord and therefore not subject to material laws. Srimad Bhagavatam (SB 1.1.15) further extols the glories of pure devotees of the Lord and states in a verse that such great devotees of the Lord can ‘at once’ sanctify anyone who comes in contact with them whereas the river Ganga purifies after repeated contact. What a great benediction it is therefore for anyone to behold such a personality whom merely by seeing one becomes purified and even gains the privilege of performing devotional service thus making his birth in this material life worthwhile!

Srila Vamsidas Babaji was such personality.

A description of the life and pastimes of this great personality is given in a book titled; Sri Vamsidasa Babaji by H.H. Bhakti Vikasa Swami.

Srila Vamsidasa Babaji Maharaja was recognized as a pure devotee by great personalities such as Srila Bhaktivinoda Thakura, Srila Bhaktisiddhanta Saraswati Maharaja Prabhupada and Srila Prabhupada as mentioned in this publication.

The narrations of the uncommon pastimes of Sri Vamsidasa Babaji give a glimpse into the life of a liberated personality completely in touch with the Supreme Personality of Godhead and as such it is imperative that all aspiring devotees read these pastimes, even just to make contact with such a rare soul and thus obtain his mercy in our endeavor for purification.

The book is available in English and Hindi and can be procured from the links below: