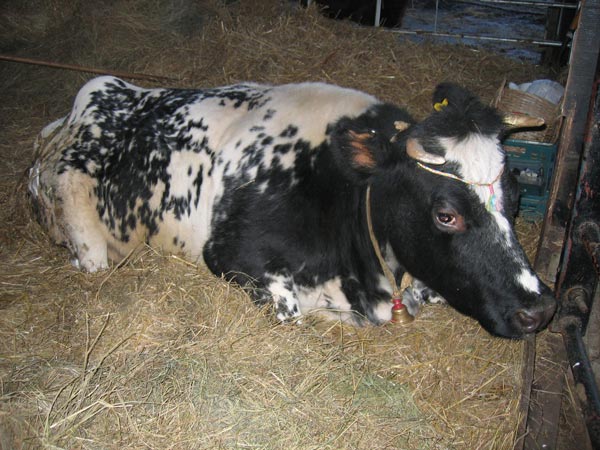 Returning to the Manor, I learned that various Hindu organisations had put out their own press releases, and that BBC Radio 4’s Sunday programme will be featuring the story tomorrow after 7.00am.

Viewing the London ITN news from the other night I found it quite remarkable how the RSPCA are providing the public with a version of events which is quite removed from what actually happened. More than that, they have escalated the level of pain and distress our cow was in to the point where anyone just has to agree with them that they took the correct action.

But they did not. They made an error of judgement born, I feel, from a sense of moral certitude brought about by the genuinely good work they do. Unfortunately their notion of compassion and prevention of cruelty involves killing the very animal they are being compassionate to. Its a view which comes from not understanding that animals have souls.

The public trust them, they have a good image, but they are not free from the tendency to make mistakes. There is a website cataloguing their mistakes which makes for interesting reading.

And killing a cow at a Hare Krishna temple was a big mistake. Our duty is to let them know that in no uncertain terms. Then to get the law changed so that it never happens again.Tomorrow will be interesting as Hindu leaders gather at the Manor to discuss the way forward.

We understand there are important developments from Kripamoya Prabhu’s description:

This morning began with a breakfast interview on BBC Asian Network Radio with Srutidharma Das, the vice president of Bhaktivedanta Manor, and Tim Wass the RSPCA man responsible for yesterday’s killing.

It continued with CNN News filming at the Manor and the examination of this mornings national press. Times, Telegraph, Guardian, Mail, all featured good pieces and used photos of Gangotri.

Many phone calls kept coming, including one from London Newsquest which serves all the local newspapers in the metropolitan area. The interviewer was extremely interested and sympathetic.

On the political front, Barry Gardiner was able to ask questions in the Commons last night, saying that an ‘outrage has been done to the Hindus in this country’ and Harriet Harman replied on behalf of Defra minister Hilary Benn, in Bali for the UN Climate Summit, that she understood the depth of feeling on this issue and that a reply would be forthcoming.

You can watch last night’s television news about the incident here, and read today’s press-release here…

In an act that will shock ISKCON around the world and Hindu communities, the British RSPCA aided by a vet and escorted by police officers this morning secretly killed a cow at Bhaktivedanta Manor. The story has reached national and international media and feelings are strong.

The cow, named Gangotri, a 13 year-old Belgian Blue and Jersey cross, and much loved by the devotees, was killed at 9.00 am. Police bundled away angry and confused devotees who were in attendance of the sick cow, and the head farmer was kept talking while inside the barn a lethal injection was given to the cow.

The killing was conducted despite personal assurances given the previous day from RSPCA officers and police that due to religious sensitivities no immediate action would be taken.

Concerns that they now had an extended legal situation on their hands, rather than an imminent action, caused the priests at the temple to contact sympathetic MPs who then contacted Hilary Benn MP, the head of DEFRA. Again, assurances were given from DEFRA that no immediate action would be taken.

“This is shocking and duplicitous behaviour” said Gauri Das, the head of the community. “We have been deceived by those who had given us their word.”

It was for this reason that, the previous day, RSPCA regional veterinary Superintendent Timothy Wass, accompanied by two assistants, together with local Hertfordshire police, had visited the temple and engaged in lengthy discussions with Gauri das, who said: “They expressed their sensitivities, and the police gave us their assurances that we would be given time to pursue a legal recourse.”

The cow was sick but had no disease. She was being cared for by temple residents and visiting worshippers, and was being administered pain relief. The temple runs ‘The Cow Protection Project’ and allows old cows and bulls to die naturally.

Head Farm Manager and former Royal Marine Stuart Coyle (Syamasundar das) explained: “Gangotri was unable to walk, but due to her condition there was some tolerable discomfort”.

Syam continued in detail: “When she first became sick we called our local vet and followed all the recommendations he directed. Along with with allopathic treatments from our local vet we have also administered a range of alternative treatments which include homeopathy, acupunture, manipulation, massage, and reiki.”

“We did expect that she would pass on quite soon after going down however here we are one year and quarter on and she was still going strong.

“We have one of our farm personnel who is specifically tasked to nurse her and attend to all her needs.

“She was located in the most visitor-accessible position in the farm to enable her to get plenty of company and also to demonstrate an important aspect of Cow protection wherein our cows are cared for the entirety of their natural life.

“Over the past month there has been a series of visits from various professional persons who have been requested to make a judgement on her condition. About one month ago our local vet came to visit her at the request of a visitor.

“Last week on the 4th of December a Vet from the State Veterinary Service
(SVS) came to conduct a test on three of our cows and at the same time to look at Gangotri again at the request of a visitor to the farm. The Vet was informed of our position regarding cows and how we take care of them within our faith. Despite this information he wrote a formal letter advising us that we make arrangements to kill the cow. I have not received this letter yet but I was shown it when he visited again on the 7th of December.

“On the second visit of the vet from the SVS he stated his opinion regarding Gangotri and I gave the position of the temple. He indicated on his departure that nothing further would probably come from it taking into count the seriousness of the cows conection with the Hindu Faith.

“On the 10th and 11th (I wasn’t available on the 10th) of December we were visited by an officer from the RSPCA who had also been contacted by a visitor to the temple regarding Gangotri. He had already been in contact with DEFRA.

“He read me my rights under caution and proceeded to issue me with a warning notice stating that we should euthenase gangotri immeadiately. Later in the afternoon a police office came under the request of the RSPCA to also re-inforce the legal position of the RSPCA officer and the SVS vet. Both the RSPCA and police indicated that they would not act without any notification but reminded us that the legal wheels are now turning.

“On the 12th of December we were visited by a seniour member of the RSPCA accomapanied by two other junior RSPCA officers. The RSPCA were also accompanied by two local police officers. During the visit the RSPCA pointed out their position regarding Gangotri and we informed them of our position. During the meeting we were led to believe that we would have the opportunity of taking some legal action to stop the slaughter notice. The police indicated that we would get time to counter the slaughter notice.

“The next morning – this morning – at 9am I received a call that the RSPCA and police were at the farm. On my entering the farm the police issued me with a warrant to enter the premises. At the same time the head of the RSPCA delegation stopped me and apologised about the action they were going to have to make. During my protestations to the RSPCA officer another officer came and reported that the cow had already been killed. The senior officer had delayed me whilst they sneekily were killing our cow.

“I immediately went to the barn to see a vet declaring the cow was dead accompanied by other RSPCA officers.”

CONTRA-ARGUMENTS TO STATEMENTS OF KAZAKH GOVERNMENT

Indradyumna Swami’s Visit in the Philippines