When guru worship gets sentimental 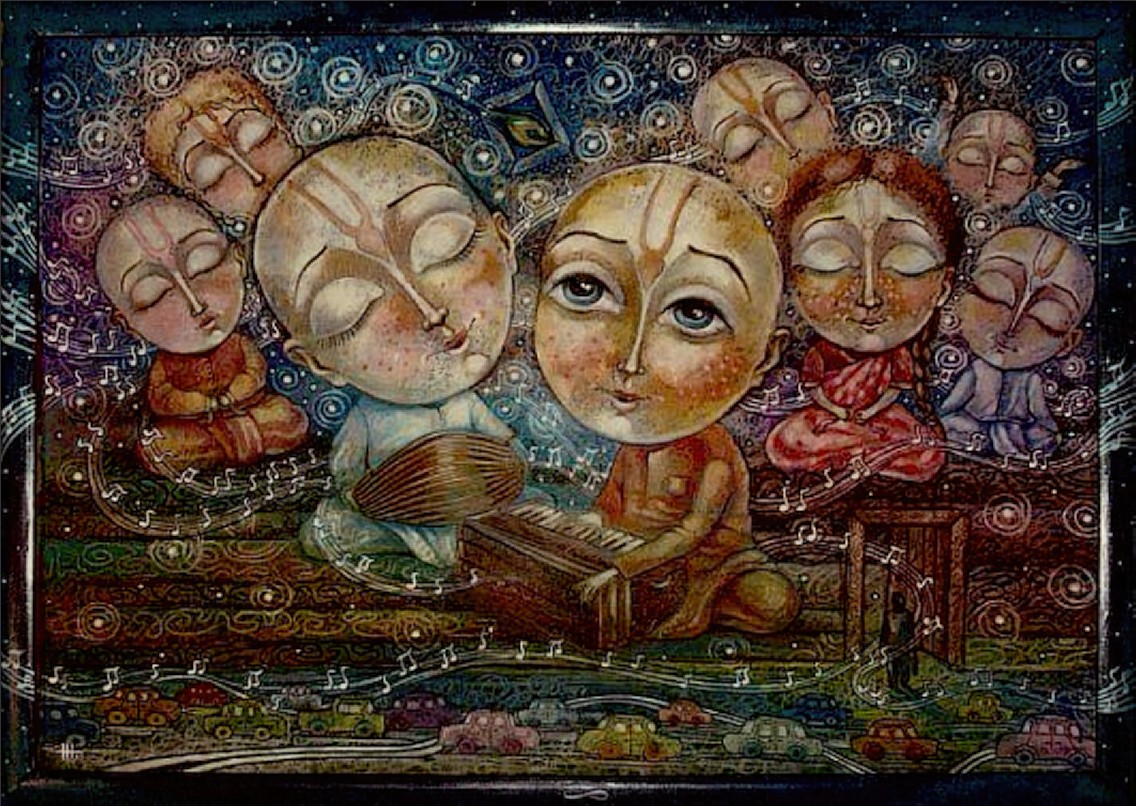 If it is better to be a sahajiya than an atheist, mayavadi, or impersonalist, then it is well again to be a sentimentalist than not a devotee at all. However, sentimental behaviour can present problems if left abandoned by a mind unrestrained by capable intelligence.

The spiritual master is the central object of vision for every disciple. Quite often, the imposition of external conditions can deflect the natural bias from something, which is essentially internal, or hidden from unqualified worshipers. ‘The solid truth of religious principles is hidden in the heart of an unadulterated self-realized person.’ (Mahabharata, Vana Parva 313-117)

If a disciple fails to discern the difference between external and internal worship of the guru, it can mean a divergence from understanding the inner or outer words of the spiritual master. This also applies to understanding Srila Prabhupada’s universal siksa instructions pervading his writings. ‘Please wake up and try to understand the boon that you now have in this human form of life. The path of spiritual realization is very difficult; it is like a razors edge. That is the opinion of learned transcendental scholars.’ (Katha Upanishad 1.3.14)

The disparity can be as stark as that between arcana ‘ which means worship; and bhajana ‘ which also means worship, for want of a better word, and point towards normal or higher worship. The process of worship does not guarantee receiving the Lord’s grace. Lord Krishna says ca cejyaya ‘ ‘nor by worship’ can He be understood. (BG 11.53)

Immediately one will have detected the linkage of the word ‘normal’ with arcana, one of the nine processes of pure devotional service. On the outer level or for those who are not exceptionally obedient, arcana is a necessary way to focus our attention. Srila Prabhupada writes, ‘In the devotional service of the Lord, therefore, these prescribed activities are called arcana, or engaging all the senses in the service of the Lord.’ (BG 16.18 purport)

Later in the same purport it is stated that arcana is meant for people who are not very renounced; ‘Therefore, for people in general especially those who are not in the renounced order of life ‘ transcendental engagement of the senses and mind’. is the perfect process of transcendental achievement, which is called yukta in the Bhagavad-Gita.’

To be clearer, purified arcana eventually becomes bhajana. ‘Any civilized man has to perform some religious ritualistic ceremonies; therefore, Krishna recommends, ‘Do it for Me’, and this is called arcana.’ (BG 9.27 purport)

In the same purport Srila Prabhupada refers to bhajana, but not by name; ‘Nowadays people are very much inclined to the meditational process, which is not practical in this age, but if anyone practices meditating on Krishna twenty four hours a day by chanting the Hare Krishna mantra round his beads, he is surely the greatest meditator and the greatest yogi, as substantiated by the sixth chapter of Bhagavad-Gita.’

In the final verse of the sixth chapter, we will find the words yukta and bhajate. Bhajate means to render transcendental loving service, and yukta-tamah means the greatest yogi.

When the mind has not befriended the intelligence, it can devise seemingly befitting ways to please the guru, which may be actually offensive, and will divert us from proper guru worship. Some acaryas used the heavy word bahirmukha to describe an external disciple. Srila Prabhupada also describes this, ‘Bahirmukha. Bahirmukha means those who are trying to be happy by adjustment of this material energy.’
(Lecture on CC Madhya 154-155, Gorakhpur, Feb 19, 1971)

There are many examples of sentimental guru worship, which are not readily detected, but cause a disturbance to others, even unwittingly.

Wanting to get noticed.

It is a natural desire of every disciple to receive a blessing from the guru, and perhaps to hear such magical words like, ‘Now your life is perfect. Thank you very much’, along with a loving embrace.

To reach that end, one may always try to seize the guru’s attention and remain in his purview, continuously remaining in the limelight as it were. The association of an advanced devotee is naturally attractive, but an over-dependence on this feature for the wrong reasons indicates a lack of philosophical conviction that the instructions of the guru are more important than close physical proximity.

If one is possessed of shallow fervour, when the guru is out of sight or leaves for a considerable time, it may translate into a slackened service attitude allowing complacency to creep in, only to be excitedly rejuvenated again when the guru comes back. Srila Prabhupada writes,”. The regulative principles will be easier for one who has served the spiritual master without reservation.’ (BG 8-12 purport)

This same sort of mentality may compose a wonderful Vyasa-puja offering on the chosen day, belying real intentions, where in fact the real Vyasa-puja offering is conducted on all 365 days of the year, again without reservation. On occasions like these, an official mindset develops. ‘Nor is He (Krishna) to be understood by persons who officially go to the temple to offer worship They make their visit, but they cannot understand Krishna as He is.’ (BG 11.53 purport)

My guru is the best.

As children, we always thought our mothers and fathers to be the best in the world, naturally. To have a father figure in the form of the guru requires more enlightened sentiments directed towards him.

Any posturing or advertising that one’s guru is better than another is fraught with material calculations. If Krishna empowers each spiritual master, it is His prerogative to decide whether the guru accomplishes greater or lesser preaching successes. For a disciple to judge or compare in terms of small or big, empowered or enfeebled, popular or unpopular and so forth, is to be a dualistic eye in Krishna’s absolute vision. ‘Lord Krishna is the supreme controller, and all others are His servants. They dance as He makes them do so.’ (Krsnadasa Kaviraja, CC, Adi 5.142)

Another slice of material gain to derive from advertising the guru could be a polite way of saying, ‘If my guru is the best, so I am also the best for following the best.’ Such extended pride neatly fits in with the adjustments of a well-intentioned, but ultimately selfish bahirmukha mentality.

A vaisnava develops sublime characteristics, which are attractive to behold. Such fine ornaments can tempt a follower to emulate the way the guru speaks, dances, dresses or behaves. The wearing of identical spectacles, or copying certain authoritative behavioural traits may appear quite flattering, but this deludes no one but himself or like-minded adjusters.

Some orders of prakrta-sahajiyas like to dress up as Radha and Krishna to engage in what they think is licensed debauchery. Though the comparison with them seems rather harsh, the simulation of the external image is relegated to the neophyte level resulting in a theatrical distortion of the truth, which is internal.

Is there such a thing as glorifying the guru in excess? In excess of what? If a devotee likes to glorify others, then the guru should certainly not be the exception. However, the way we glorify should tell the difference.

What if one eulogizes the guru, or another devotee, and exclaims an uttama-adhikari status, when it might not be true in some cases? It can be a paradoxical mind jolting experience if a disciple learns that an infallible guru is discovered having spiritual difficulty, or worse, falls away from Krishna consciousness.

A disciple will naturally block out any slight hint or notion that the one he or she worships could possibly be any less than infallible. What if a disciple thinks, ‘I know it is highly, highly unlikely my guru will fall, but the remote possibility is there? If that dreaded moment comes, I can be prepared emotionally.’

Will such a thought as this cushion the blow of any eventuality? Alternatively, will this thought ruin the disciple’s spiritual life? Would it hurt the image of the guru if he were to say to his disciples, ‘My dear disciples, let us be clear about something. I am not quite the uttama-adhikari you say I am, but I am nevertheless fully engaged in Krishna’s service, and will do my utmost to take you back to Godhead. So please tone down your glorification of me.’

Since glorification is poison for a vaisnava, if some followers persist in excess simply to be noticed, and if the guru looks approvingly on this behaviour, the combination is a rather toxic cocktail. ‘Sometimes penances and austerity are executed to attract people and receive honour, respect, and worship from others. Persons in the mode of passion arrange to be worshipped by subordinates and let them wash their feet and other riches.’ (BG 17.18 purport)

Essentially, the guru is to be engaged in serious bhajana. It is a healthy sign for a disciple to see. The pursuit of sraddhavan bhajate yo mam should help the renounced order rise above normal arcana. If not, one famous woman gives a stinging rebuke, ”. and anyone situated in renunciation that does not lead him to devotional service to the Supreme Personality of Godhead, must be considered dead, although breathing.’ (SB 3.23.56)

A Vision from the Heart

35 Comments to “ When guru worship gets sentimental”