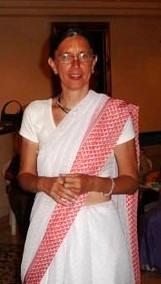 My first New Years Eve living in the temple. I wasn’t sure what to expect on our annual New years Hari Nama, but hey, I was there for the long haul. We started at 8:00pm. We regularly go downtown San Diego every Friday night and stay until 10pm, but tonight was different, we were staying until at least midnight.

Nice Hari Nama, I had a lot of prasadam to give out in the way of flowers that came from the altar vases. Mostly I gave them to the nice ladies that work at the restaurants and smile at me every Friday. They’re especially blessed to see us every week. We did our regular route and at the end, half of our group left to return to the temple.

The rest of us stayed to ring in the New Year chanting the holy names in public. I hope Srila Prabhupada was proud of us, because in my heart, I’m certain this is exactly what he would have wanted us to do. We found a nice, busy corner to stop at and continue our kirtan. Things got kind of slow around 11:00 or so. I was running out of steam, and just took a break sitting on the window ledge singing and playing kartals. I was tired, and getting chilly, and frankly, a small part of me wished I was back in the nice warm and cozy temple. But then I thought about Krishna and Srila Prabhupada. Prabhupada used to have the devotees out for eight hours at a time, doing Hari Nama and book distribution. This was no longer about my physical comfort, or lack thereof. I was sacrificing my personal gratification for the holy name.

I was there to share Krishna’s mercy with any person who had the good fortune to be within earshot. Last thing I remember was asking someone what time it was and was told 11:45. Oh good, almost midnight. Then an amazing thing happened. All of a sudden people were stopping and dancing to the beat of the mrdanga. The crowd grew, and grew until the whole sidewalk was filled with people dancing to the sound of the maha-mantra.

I became filled with Krishna’s energy and joined in. We were all caught up in this wave a transcendental bliss, and couldn’t stop. A small group even started chanting “Oi, Oi, Oi” (a punk rock refrain) in between the repetitions of the maha-mantra. It was their way of giving of themselves to the Hari Nama. In this way, they blended themselves with us and we were all joined together by the power of Krishna’s love. I went out to the crowd to invite everyone to join in.

The mercy flow couldn’t be stopped. Most people barely took notice of the countdown that was visible from the bar across the street, we just kept dancing well past the stroke of midnight.

It did continue on for awhile, but all good things must come to an end, it’s just the nature of this material world. I am though eternally convinced that’s there’s no other way than Hari Nama to reach the conditioned souls. The minute I surrendered my personal gratification for the sake of glorifying Krishna, He reached out and extended His energy to include us all, regardless of our commitment to Him. I’m constantly encouraged by the people who, if just for one minute, dance to our mrdanga beat as they pass us on the street. Just for that one moment, Krishna has captured their heart. Hari Nama is certainly the most purposeful thing I could be doing with my time.

There’s no other way.

Face to face with death