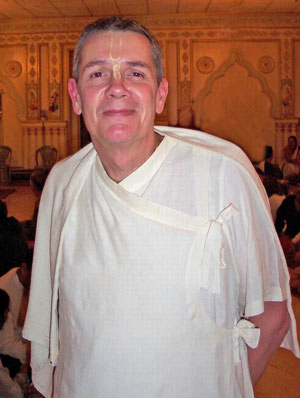 Satyaraja Prabhu’s reply follows a pattern appearing in the writings of others adamant that no further action should be taken regarding Dhanurdhara Maharaja’s status as an initiating guru. The attempt is like a magician’s sleight-of-hand: the strategy is to divert attention from the essential by focusing on the detail.

The logic runs something like this. I say to Satyaraja Prabhu, “Can’t you see this forest?”

He replies, “What trees?”

I say, “The ones with all those brown leaves.”

He responds with “Those leaves are red, not brown.”

I say, “Red, brown, whatever. I am talking about the trees right there in front of you.”

He replies, “First you say the leaves are brown. Now you’re saying they’re red. These conflicting claims prove that obviously there is no forest.”

The magician’s trick is to distract you from the object at hand. Then, lo and behold, he can make it “disappear.” Lest we lose sight of the forest for the trees, let me re-cap:

There is no question that there was horrendous child abuse in the Vrindaban gurukula during Dhanurdhara Maharaja’s first tour of service there (from 1979 to 1986). This happened not only before his eyes but sadly, in some cases, by his own hand. If any doubt remains on this point, with Dhanurdhara Maharaja’s permission, I can release the summary of this abuse recently sent to the GBC. I would rather not do this, as I do respect Dhanurdhara Maharaja as a sincere Vaisnava and I also do not want to cause his disciples any more distress. On the other hand, if this attempt to whitewash or explain away the abuse in Vrindaban continues, it will be hard to maintain this restraint.

As for the pattern continuing up until 1995, the history is that for a number of years before 1995 Sri Rama Prabhu and I (he as the ISKCON Minister of Education and myself as a member of the board of education) had repeated discussions with Dhanurdhara Maharaja, practically every year in Mayapur during the GBC meetings, about introducing child protection training and dropping corporal punishment. We were rebuffed again and again, being told by Dhanurdhara Maharaja that the child protection training was “introducing Western maya into the school” and that corporal punishment was an essential element for maintaining discipline.

Finally, in early 1995, Dhanurdhara Maharaja personally promised Sri Rama Prabhu and myself that he would rein in the practice of punishing students by beating them with a stick. Yet later that year I was sent photos of students still being beaten black and blue as punishment. When the situation was investigated, it was discovered that Dhanurdhara Maharaja had never said a word to the teachers about restricting the practice. As confirmation, Maharaja’s failure to communicate this agreement was the reason that no abuse case was logged against the teacher who administered the blows. So whether it was by commission or omission, the results were the same. Dhanurdhara Maharaja could have and should have stopped this suffering of students but he didn’t.

Satyaraja Prabhu refers to a letter I wrote to Dhanurdhara Maharaja in late 1995 and asks, “What has happened to change your opinion?” Let me list a few key events:

I would offer that in light of the above, the question here should not be “Why has Badrinarayan Dasa’s view changed?” Rather the question should be “Why hasn’t Satyaraja Prabhu’s?”

Satyaraja Prabhu argues that truth is many-sided and thus Dhanurdhara Maharaja is more than the sum total of the above events. I agree. Therefore, I wrote, “There is no doubt that Dhanurdhara Maharaja has another side to him, one where many good qualities are found.” The question now is when will Satyaraja Prabhu admit that there is also the side to him that is a prime cause of the events listed above? It is this element of the truth that he denies, the side that ISKCON as a community is obliged to now face up to and deal with.

No one wins by Satyaraja Prabhu and me jousting online. Rather, the wounds on both sides are only deepened and the inevitable offenses increased. My fervent prayer is that Satyaraja Prabhu will turn his keen intelligence toward working with us to find a solution to this situation, one that addresses both sides of the truth, not just the side he likes.

I would offer that the closing of Satyaraja Prabhu’s letter, with its appeal to compassion, sheds light on a possible shared path to resolution. Many senior, saintly Vaisnavas have suggested to Dhanurdhara Maharaja that a compassionate way out of this conflict would be if he would voluntary vow to never initiate again. It would be compassionate toward the gurukula alumni, their parents, his disciples, the devotees in general, and ISKCON’s reputation. It does not stifle his ability to preach. Rather, ending the firestorm he is currently in the center of would win him the gratitude of devotees around the world. Thus, taking such a vow would make it a compassionate act even toward Dhanurdhara Maharaja himself.

Catch the wave of the future!
The Hare Krishna's Throw a Better Party than Anyone Else I know!