Hare Krishna! The Film: National Event Screening in Over 80 Cities!

“When we understand that we are not these bodies but are spirit souls, then there will be peace.” – Srila Prabhupada

We are very excited to announce a nationwide special event screening of Hare Krishna! at Regal Cinemas. On September 21, 2017, the International Day of Peace, Hare Krishna! will show in over 80 cities around North America at 7pm in all time zones.

This is a great opportunity to celebrate world peace by bringing along your families, friends, colleagues, yoga buddies or student groups to watch the film.

Following is the full list of locations and theaters where the event will be held:

Information on ticket sales will be available shortly, so stay tuned!
For more information, go to: http://harekrishnathefilm.com/event-screenings/
Get behind the event in your city by helping to promote it through marketing and outreach. We have put together a complete screening toolkit that has everything you need in it to spread the word.
Click on the link to download: https://drive.google.com/open?id=0B_uL1QMbGWpTanBPZTlNMTRlOE0
For more information, contact: info@innervoiceproductions.com
Please share the official event post by downloading the image and copying the caption, and posting them to your social media platforms: 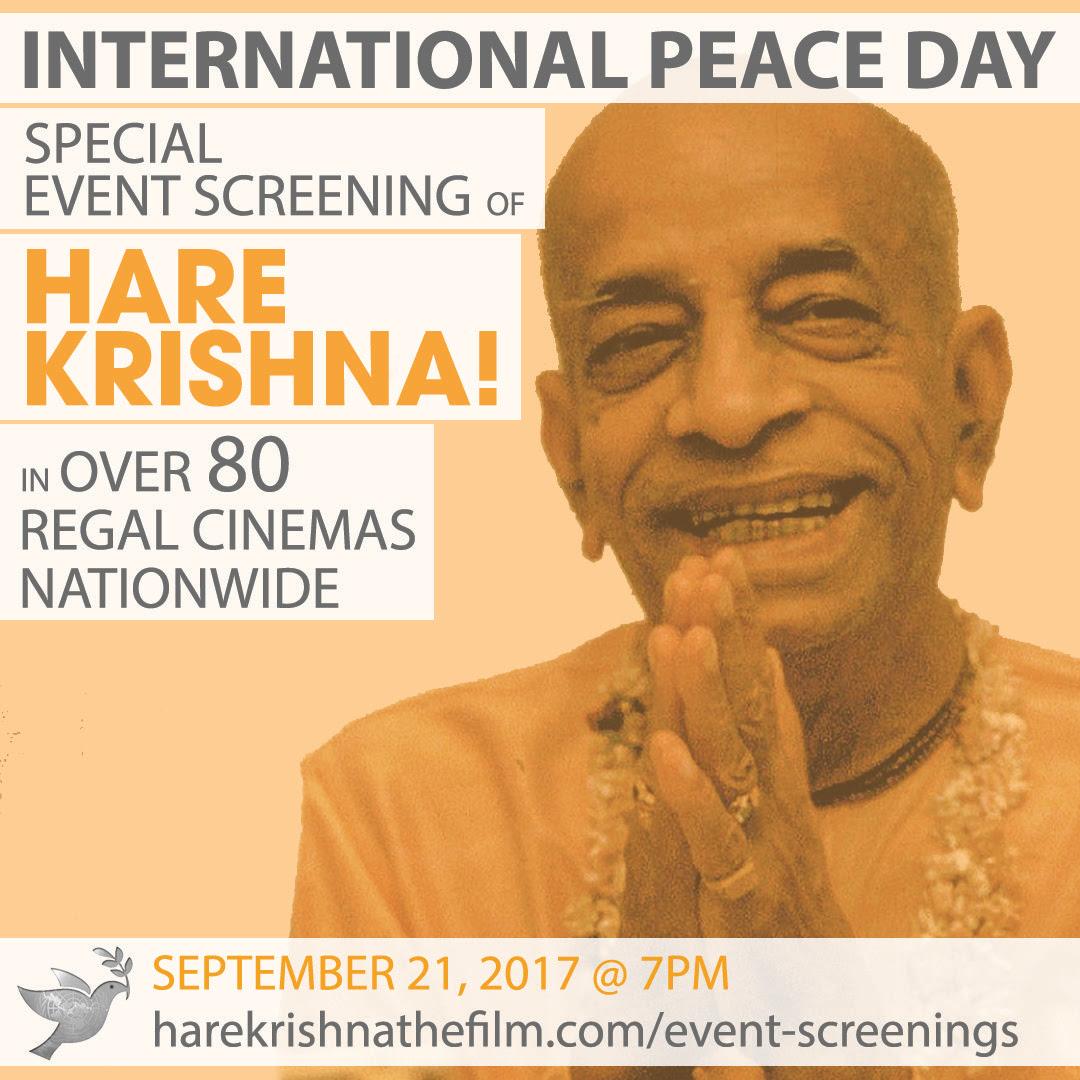 Celebrate International Peace Day with Prabhupada! Hare Krishna! will show in over 80 Regal Cinemas nationwide. Bring along your family, friends, colleagues, yoga buddies or student groups to see the film! For more information, go to: harekrishnathefilm.com/event-screenings
#peaceday #peaceday2017 #worldpeace #harekrishna #harekrishnathefilm
If your city is not listed above, don’t worry – you can still participate in this exciting event! We are using Theatrical On Demand® to allow you to host your own screening of Hare Krishna! in a movie theater of your choosing!

Hosting a Theatrical On Demand screening is FREE and EASY, we will just need you to help us spread the word! All you have to do to sign up is click the “CAPTAIN IT!” button on the Hare Krishna! website and fill out the Screening Request Form.

Click here to get started: http://harekrishnathefilm.com/theatrical-on-demand/
“My mission of life is to propagate the idea of cultivating spiritual vision, which alone can bring about peace and prosperity of the human society.”
– Srila Prabhupada

Hare Krishna! is the true story of an unexpected, prolific, and controversial revolutionary. Using never-before-seen archival verite, Prabhupada’s own recorded words, and interviews with his early followers and scholars, the film takes the audience behind-the-scenes of a cultural movement born in the artistic and intellectual scene of New York’s Bowery, the hippie mecca of Haight Ashbury, and the Beatle mania of London, to meet the Swami who started it all.

We hope to see you there!

We can’t wait to share the film with you!

Please help to spread Prabhupada’s story and message by forwarding this email to your community and then to at least five other people who may appreciate it.

To find out more about the film, go to: http://harekrishnathefilm.com/

Becoming Instruments for Mahaprabhu’s Mercy; A Blissful and Productive Weekend for ISKCON Brooklyn