Which Brahma are you? 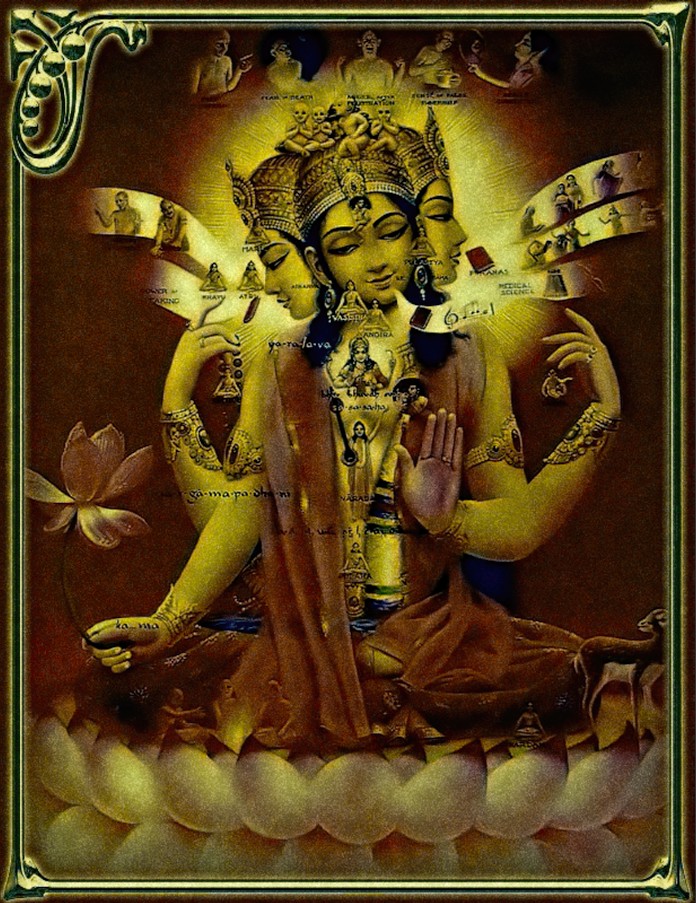 The story of Lord Brahma going to visit Krishna at Dvarka is one of my favorite stories for reminding me of my insignificance. I think of this story when I am confused with other Karnamritas. I get email for Karnamrita dasi the singer, and I get asked if I wrote the biography of Gaura-kishora das Babhaji, or other books. I am reminded of my dear friend Dr. Garuda who has to distinguish himself from another Garuda who is active on-line.

So which Karnamrita am I? That is a great question with superficial and deep answers. Who are any of us?

Prabhupada initiated 3 disciples with the name of Karnamrita das, and I am the middle one. So I could answer that I am the insignificant servant of Prabhupada
(with one big head of fluff) who was initiated in Los Angeles in August 1970, or I could say I am the husband of Archana-siddhi the well know devotee therapist and BTG author, or the I am the pujari, or I am the energy healer New Agy type devotee, etc. We all have so many ways in which we may be know or designated that are to our liking or not.

Ke ami? So which one are we? Which das or dasi are you—really? Let us remember this story of Brahma:

Lord Brahma is greeted by Krishna’s doorman at one of his palaces and asks,

‘What is your name so I may tell Lord Krishna who has come, desiring his audience.’

‘I am his devotee Brahma,’ was the reply.

Brahma may have wondered how the doorman didn’t recognize him by his four heads, but perhaps this doorkeeper was inexperienced. We assume that many other demigods came to visit Shri Krishna in Dvarka, so perhaps the doorkeeper wanted to make sure he didn’t make a mistake.

After some time, the doorman returned and asked another question to the anxious Brahma, ‘Which Brahma are you’?

With the appearance of the doorman Brahma was expecting to be let in. Thus he was taken back by the question, and puzzled over the meaning. His great intelligence from his four heads was bewildered. What kind of a question was this? As far as he knew he was the only Brahma, so were there others? Brahma is not a man of few words, yet he found himself speechless in confusion. Finally, he came up with a reply.

‘I am the four headed Brahma, the father of the four Kumaras.’

After some time he was escorted in through the incredibly opulent palace to the room where the regal Krishna was sitting comfortably on a royal throne.

Upon seeing Lord Krishna, Brahma offered him obeisances and appropriate worship, and then Shri Krishna honored him with welcoming words. He inquired from Brahma about the nature of his visit.

Brahma replied that he would tell him about the nature of his visit after Krishna helped with a doubt.

Brahma questioned the Lord thus, ‘Why did you ask which Brahma had come? Kindly tell me the purpose of such an inquiry. Are their other Brahmas besides me in this universe?

Krishna smiled at Brahma’s words and called all the Brahmas from the infinite universes. Immediately unlimited Brahmas arrived wth their various numbers of heads. Some had ten, some twenty heads, fifty, a hundred a thousand, some ten thousand, one hundred thousand, some ten million and one hundred million. Their was no counting the number of heads.

Also arriving from each universe were the various manifestations of Lord Shiva with unlimited heads, and King Indra with thousands of eyes on their bodies.

Beholding the unlimited opulenses of Krishna and feeling dwarfed by the manifestation of other Brahmas, our universes Brahma felt like a rabbit amidst many elephants.

I love what Brahma says, ‘There are people who say, ‘I know everything about Krishna.’ Let them think in that way. As far as I am concerned, I do not wish to say very much about this matter. O my Lord, let me say this much. As far your opulences are concerned, they are all beyond the reach of my mind, body and words.’ [SB 10.14.38]

The ‘Law of Contrast’ is very important for all of us. Thinking of those greater than our self can help us to realize our true position, as tiny and insignificant. We all have a little bit of ‘Isha’ or controlling power, yet in comparison to the many powerful people on this planet what is our position? Then there are the devas, and the Supreme Isvara, Lord Shri Krishna.

We are never the doer, but have to be empowered to do any even simplest thing’what to speak of large accomplishments? We may appear great or devout to others and have influence, power, bhakti, wealth, education, good looks etc, yet as devotees we have to remember that whatever opulence or Krishna consciousness we have been blessed with are given to us for service, not for any selfish purpose. We are all on the path of realizing this fact: We are givers or servants, not takers or masters.

As it is said in the Christian tradition, ‘To whom much is given, much is expected.’ And for those of us living in America, Prabhupada told us something like, ‘What is the use of being American if you don’t do something wonderful.’ We could easily say that for all devotees. What is the use of being a devotee, unless we do something wonderful or become wonderful? Being wonderful means being a pure devotee imbued with Prema, or at least making steady progress in Bhakti and sharing what we have to our utmost capacity. The best use of our life energy is to chant Hare Krishna and engage in devotional service. We do our best and the results come by Krishna’s mercy.

So which Brahma are you?

23 Responses to “Which Brahma are you?”