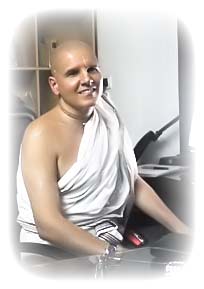 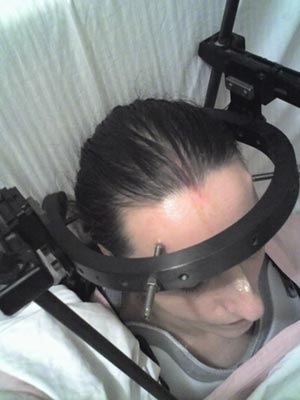 On January 7th, 2008 I took Sundari Radhika Devi Dasi in for a CT Scan to see if the bones in her neck had healed so that the “halo” she is wearing could be taken off. Our neurologist Dr. Vaishya spent a long time looking at the images and came back to give us the bad news. For some reason the fractures were all still clearly visible indicating that there was no improvement since the last month and that her neck bones had not healed. He then explained her two options:

1: fuse all the affected vertebrae, six in number. She would never again be able to turn or bend her neck again for the rest of her life and look like a robot. Aside from looks and inconvenience it would give her a lot of pain because of muscle strain.

2: continue wearing the halo for two more months and then check again.

It was a no-brainer and she chose to wear the halo for another two months on top of the four (4) months she has already worn it.

We discussed possible reasons why the bones had not fused and things we could do to speed up the healing. It turns out that some people’s bones take a long time to heal and that in some cases a patient has had to wear a “halo” for as long as 11 (eleven) months. It is great austerity with a lot of attendant suffering but patients are willing to accept it because the other options are even worse: fused vertebrae or paralysis. Better to suffer for a short period of time rather than for the rest of life. 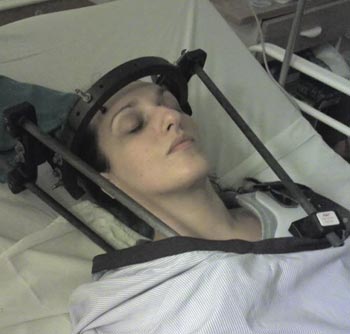 We need to increase her calcium intake and have her eating a lot of yoghurt daily as she can not drink milk. I also want her to start taking high quality calcium supplements. Unfortunately the best that is available in India — Calcium Citrate Malate – has animal based gelatin in it. If anybody can send vegetarian Calcium Citrate Malate it would be appreciated. They can contact me at:

To better understand what wearing a halo is like take a look at the pictures. The “halo” is bolted to her skull with four titanium bolts that have been specially treated to make them hypo-allergenic and to reduce infection. The “halo” is then held in place by being fastened to a heavy plastic vest. The “halo” holds her neck immobile and in traction. She has to carry around an extra 10-12 kgs of weight all the time (and this is the lightest version). Like many others who have worn this device her shoulders are quite sore to the touch. She can only sleep on her back. No matter how soft the bed is she is laying against the hard plastic vest which goes down to her waist. She can not lie on her side. She doesn’t rest her head on a pillow but on two titanium bolts when she sleeps. Try that for a few minutes what to speak of four months. She doesn’t sleep well. She can not bath her upper body properly but just uses a face cloth and tries to get as far under the vest as possible which is not very far. Even though I went through hell myself with 12 fractures and all the agony that entails I do not think I would trade for the “halo.” Despite having to go through the “halo-hell” she still keeps very good spirits and she is often laughing and joking. She especially likes to see the colorful parrots that fly near our windows; they remind her of Radharani and Andal who always have parrots with them. She takes it all philosophically remembering this verse from Srimad Bhagavatam:

“My dear Lord, one who earnestly waits for You to bestow Your causeless mercy upon him, all the while patiently suffering the reactions of his past misdeeds and offering You respectful obeisances with his heart, words and body, is surely eligible for liberation, for it has become his rightful claim.” SB 10.14.8

I also got her to go to the temple for the first time since the accident. It was a deeply emotional experience for her especially when she came before the altar of Sri-Sri Gaura-Nitai. She had been the head pujari in both Rijeka and Zagreb, Croatia for many years where the presiding Deities at both temples are also Sri-Sri Gaura-Nitai.

As for me there is still a lot of pain for while my bones have healed I am now going through the aftermath of physio-therapy which is not a picnic. I go to my doctor at least three times per week. He is actually quite good and better than any similar physician that I have been to in the USA or Canada. I had been limping quite badly on my right foot. It was quite painful and weak, but after about 10-12 treatments my foot now is about 95% normal. Now we are working on getting my right shoulder to move properly. I can not lift my arm because the joint is “frozen.” And on alternate days we are working on dealing with the nerve damage in my left hand that gives a lot of numbness and pain. My doctor said this nerve pain is the hardest to deal with but we are both happy with the progress I am making both with my hand and shoulder. After I get the hand and shoulder fixed I have several other body parts to work on especially my back, the center of the autonomic nervous system. My wife and I both suffer from “autonomic hypotension” a condition caused by damage to the autonomic nervous system resulting in sudden temporary drop of blood pressure leading to dizziness and blackout when we change our bodily posture. For example if I sit down or get up I have to do it carefully because suddenly the room starts to spin, it doesn’t last long but for a few moments I feel very dizzy and that is when accidents can happen — something I learned the hard way. Anyway it will take several more weeks of therapy at the very least. So I will have plenty to do while waiting for my wife to have her “halo” removed. I will bring Sundari in to see my doctor after he examines her CT Scans to see if there is anything that he can do to stimulate the healing process in her neck bones.

During the marathon I was so inspired after reading some of the sankirtan stories that I also wanted to go out and distribute books and asked Prema Kishore Prabhu if I could join his team (which eventually sold 13,000 Gitas, Delhi is the book distribution capitol of the world they distributed 204,000 Gitas during the last marathon). He agreed, but after I thought about it more carefully I realized that I was way too weak to even consider doing such a thing. My body is still so fragile that if I bump into something that normally I would hardly notice I am now in pain. Hence I am careful to avoid crowds and being bumped or jostled which is not exactly good if you have to go out and distribute books in busy public places in India which can often be a chaotic scene with plenty of bumping into people. I also did not want to slow down the other team members because I know I could not keep up with them, I get tired easily. Besides who would carry my books? There is no way my back could take the strain. So I reluctantly conceded to the fact that while the spirit was willing the body was weak. Still, not to be totally defeated I started bringing a couple of books with me when I went for my therapy session and would sell them in the doctor’s office. I sold seven Gita’s like that in the last week of the marathon. It is easy to convince people of the suffering in the material world when they are at the doctor’s office.

Last Saturday, January 12th, 2008, I went with Umapati Svami as the chief guests for an awards ceremony for another book distribution team that had distributed 12,600 Gitas during the marathon. We both tried to enthuse and inspire the devotees as much as possible but I can say that at least for me I was the one who was inspired by them; they were so ecstatic after one month of intense book distribution. And what was most amazing is that many of the people to whom we gave awards for book distribution had themselves received a Gita for the first time in the previous marathon and were now themselves distributing books. Other team leaders told me similar stories. If this keeps up Delhi, where Srila Prabhupada had himself gone door to door to distribute BTG, will soon be flooded with Srila Prabhupada’s books.