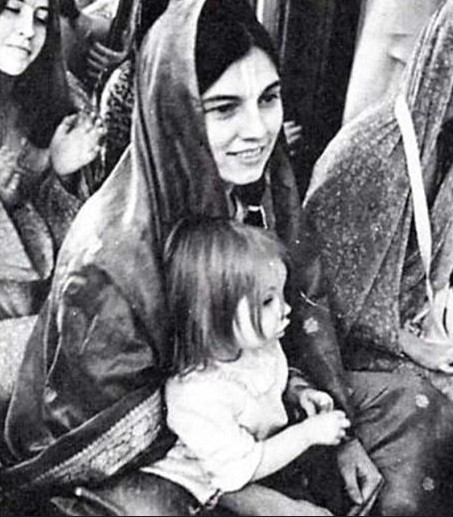 I am writing with great sorrow to report that Karunika Devi Dasi left her body on July 15, 2017, after experiencing a massive heart attack in her home in Grosse Pointe, Michigan.

I first met Karunika in 1966 shortly after Srila Prabhupada incorporated ISKCON in the United States. She was Adele back then. In 1967, she and I traveled from Detroit to San Francisco, where the Summer of Love was in full flower. Srila Prabhupada had just started the second ISKCON temple there, and Adele first learned the Hare Krishna mantra from the stencils the devotees had painted everywhere in the Haight-Ashbury District. After returning from San Francisco we were married, and in June of 1968 Adele gave birth to our daughter. We then established our hippie farm just outside of Ann Arbor, Michigan, and began our version of a spiritual quest.

Karunika was a natural born leader with a sharp intelligence, a beautiful smile, and a gentle charisma that attracted people like bees to a flower. She had chosen the famous Brijbasi & Sons poster of Gopal Krishna to frame and hang on the wall at our farm, which captivated everyone with Krishna’s ethereal beauty. Right from the beginning she had great faith in the protective power of the Hare Krishna mantra, and she would demonstrate the graceful dancing of the devotees she had seen chanting in the park in San Francisco as they stepped side to side with their arms upraised. Often when people came to us in distress or having a bad drug experience, she would sit them down in our music room and play Srila Prabhupada chanting Hare Krishna on the “Happening” album over and over until the person invariably calmed down.

By Krishna’s mercy, we first met the devotees in 1969 in Ann Arbor. Sri Govinda Dasa was distributing books and incense in front of the local head shop, and we bought a copy of the original blue abridged Bhagavad-gita from him. Soon we were visiting the original Detroit temple on Forest Avenue near Wayne State University, where Bhagavan and Krishna Bhamini, Jagadisa and Laxmimoni, and Narottamananda had come from Buffalo, New York, to start one of the early temples in the U.S. A few others had joined by then including Sri Govinda, Jagat Purusha, Mahananda and Hladini Dasi, Laksmi Narayana, and Radhika Dasi. Naranarayan Dasa had come from California to build the altar and carve the Deities of Lord Jagannatha, Subhadra, and Balarama, Whose worship continues to this day.

Bhagavan Dasa immediately realized that our group of hippies were good prospects and began encouraging us to move into the temple. One day he brought a group of devotees and all the leftover Sunday Feast prasadam out to our commune, where they walked into a crazy party with at least 50 or more friends and acquaintances, many of whom had never seen anything like the devotees. The kirtan was exciting, but the attention span of the partiers was such that Bhagavan cut short his talk, packed up the devotees and left. However, many of our friends did visit the temple and, through Karunika’s encouragement, a number of them became devotees including Radhasundari Dasi, Dinadayadri Dasi, Visalaksa Dasa, Sitarani Dasi, Sitala Dasi, Icchamati Dasi, and Abhirama Dasa. Karunika immediately understood the importance of offering all our food to Krishna and carried on that practice for the rest of her life no matter what circumstance she found herself in. She was an expert seamstress, and her first service for the temple was sewing clothes for the new Jagannatha Deities. She even took hand sewing back to the farm and worked on it there. By early 1970, I had the opportunity to see Srila Prabhupada in Los Angeles and returned to tell Adele that we needed to move into the temple as soon as possible. The small temple was packed, but we carved out a small area in the attic for our family. Later on in 1970 the devotees moved to the Jefferson Avenue temple, which was a big step up in facilities, and we continued our service there.

Adele and I eventually separated, and unfortunately she left the temple for a while and missed the opportunity to be initiated by Srila Prabhupada. However, she returned full force to devotional service after Prabhupada’s disappearance and was initiated by Bhagavan Dasa in Italy in 1983, when she received the name Karunika Devi Dasi. She then returned to the Detroit temple, which had relocated to the beautiful Devasadhan Mandir. She continued sewing for the Deities and did pujari service, dressing the Gaura Nitai Deities several days a week. At that time, the devotees ran a world-class Govinda’s restaurant inside the opulent historic temple building, and Karunika is renowned as the best hostess the restaurant ever had. She also headed up an extremely successful FOLK Program in her home for a number of years that attracted many, many sincere souls to Krishna Consciousness. Thus, Karunika is one of the few devotees in Detroit who can trace their service to the beginning on Forest Avenue, and then to the Jefferson Avenue temple, and finally to the Deities’ permanent home at Devasadhan Mandir.

In recent years, Karunika worked as a caregiver for the elderly and was raising her two grandsons after the tragic death of her daughter from a second marriage when the boys were quite young. She had an altar in her home, and the boys (one now in college, the other in high school) always loved visiting the temple with her.

Karunika and I stayed in touch, and even during tough times she always maintained a very positive attitude towards Krishna Consciousness and was extremely attached to Srila Prabhupada and devoted to Sri Sri Radha Kunjabihari, Lord Jagannatha, and Sri Sri Gaura Nitai. She would never fail to end any conversation by expressing her love for Srila Prabhupada and Sri Krishna. I would like to offer my obeisances to Karunika Devi Dasi and beg the blessing of all the devotees and those who knew and loved her to offer their prayers for her continued progress towards Goloka Vrindavan.

The Misuse of Yoga and Everything Else. According to Yoga...
Krishna conscious presentation at PMI India (Album with...

In memory of Sriman Bhagirath prabhu