Touch of the Brajabasi: The Mendicant. “Like all great… 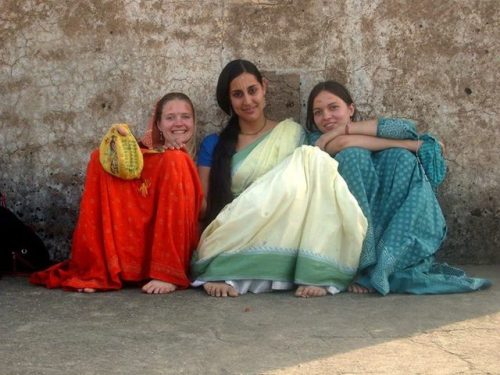 Touch of the Brajabasi: The Mendicant.
“Like all great travelers, I have seen more than I remember, and remember more than I have seen.” ~ Benjamin Disraeli
Bhakti-lata Dasi: One day, three women set off to perform pilgrimage of Varsana – the holy land of Sri Radha. These women would journey through villages, mountaintop temples, and forests, and along the way, they would encounter an array of people – from temple guardians to beggars. Each woman would walk away transformed at the end of the day in unexpected ways.
One of those women was me. This is one way that I changed.
As we traveled, I saw my two companions, Bhanu Nandini and Rangadevi, give money to pujaris (caretakers) and to temples. I gave none. I saw my two companions engage in friendly rapport with the natives. I remained silent. I saw them glance compassionately upon beggars. I did not. I stuck to my attitude that I had to be the tough one for all of us. As we were obviously Westerners, to show kindness would be a weakness, instantly exploited. I refused to be naïve.

And then… she came.

It was mid-afternoon, and our traveling party was traversing a forest path strewn with ancient temples. We rounded a bend, and opposite the path of a quaint temple, an old woman sat on an upraised platform on the hillside. She wore a faded white sari wrapped like a toga and sat behind a little stand that held a large, ancient book. Her eyes were luminous behind her thick glasses. She softly sang from her book.

Ever the photographer, I whipped out my camera. As we approached, the old woman looked up. “No photo!” She scolded and hid her face with her sari. She then hefted her monkey stick and brandished it at me. “No photo!” I gasped and fumbled to stow my camera back in my bag. Let’s get out of here!

Bhanu and Rangadevi had other plans. They walked right up to the old woman and offered her some money to put in her battered beggar’s can. She accepted it warily. I held back in silence, still standing on the path while the two climbed up to the hillside where she sat. Okay, guys… time to go now. She’s still holding the monkey stick…

Bhanu then began to attempt conversation in her broken, spirited Hindi.

I remembered the way the woman had sung from her book… and suddenly I decided to open up, just a little. Soften, just a little. If Bhanu could, if Rangadevi could, certainly I could.

“Can we – listen – you sing?” I asked, miming. If anything could unite adversaries, it was the songs of God. The old woman looked at me with mistrust written all over her face. She bobbed her head curtly, and the three of us sat across from her.

“What is that?” Rangadevi asked, gesturing to the ancient book on its stand.

The woman seemed to soften. “Ramayan,” she replied.

The story of Lord Rama? I wonder why she reads Ramayan when she resides in Varsana, the land of Sri Radha.

“Mandir – “ she pointed to the little temple across the path. “Ramchandra,”

I was still a little mystified, but who says devotion to God must be restrained by time or place? “You – sing?” I ventured. I pointed to the book.

She hesitated, and then looked down to the ancient pages and found her place with her finger.

She began to recite the Ramayan. Her ancient voice transported me to ancient places and ancient people. I absorbed every sensation – how the golden sun infused her sitting place with light, the soft green of the trees, the dappled white and blue wall behind her that brought out her tattered white sari and dark leathery skin.

She continued to sing and sing, as if she couldn’t help herself, as if the three of us weren’t there listening. I closed my eyes and listened to the rhythm of Sanskrit. Her devotion to Lord Rama seemed to flow all around me and soften my heart.

Suddenly she stopped her recitation. I opened my eyes. She looked at me and said, “You – photo,”

She nodded. I glanced to my companions and they only nodded vigorously, too. In shock, I fumbled with my bag and brought out my camera. The woman sat a little straighter and continued to recite. In her serenity, I took her picture.

A long time passed as we sat there and listened to the old woman sing the Ramayan. She did this all day, every day, and she would probably do so until she left this world. We had stumbled across her for only a window of time, catching a glimpse of her life, a drop of her devotion.

When Rangadevi softly interrupted that we needed to continue on our way, she nodded. I walked over and showed her the pictures of her that I had taken. She smiled, then, a wide, beautiful smile. I smiled back. Bhanu asked for blessings. The woman placed her hand on each of our heads, and she lingered on mine. I knelt to the ground and offered her my respects. I lingered, deeply humbled.

When our traveling party had moved on, I glanced back. And there she sat in the golden afternoon sun, singing to Lord Rama.

“Bhakti,” Bhanu murmured. “You were melting back there,”

NEWS FROM THE BRAHMACHARY ASHRAMA