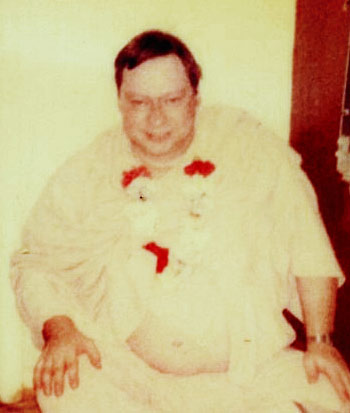 This photo of Jayo Das was taken in 1982 in Oklahoma City, Oklahoma, at the Alamo Plaza Motel a fund raising project we were operating for the Manipur Temple with HH Bhaktisvarupa Damodar Swami.

My dear Prabhu’s I am writing to inform you of the hospitalization of my dear godbrother Jayo Das, an older disciple of Srila Prabhupada, who had been residing in an duplex owned by disciples of HH Bhaktisvarupa Damodar Swami, Hari Mohan Das and his wife Radharani Devi Dasi in Denver,Colorado. Jayo has been disabled and living on HUD housing and SSI in recent years because complications resulting from his diabetes.

Jayo dasa was admitted to the University of Colorado Medical Hospital with sever sepsis (infection) from a wound on his foot almost two months ago. After intubation and almost a week on the ventilator, a mechanical device to breath for patients who cannot breath for themselves sufficiantly, Jayo improved and he was placed on dialysis three times a week. Several weeks ago his foot was amputated and now he has been admitted to acute rehab to help him regain his strength. He is able to chant some japa now and preaches to the medical staff and patients as possible.

He has requested me to post this on Dandavats.com, so that his Godbrother’s may know of his condition, and he requests their prayers, visitation, and assistance. He will transferred to a nursing home facility for further care as soon as he is able to tolerate.

He was visited by HH Hanumat Prasak Swami and Nikattma Das, Denver Temple President, while he was visiting Denver, Colorado, last week. Devotees have brought him prasadam several times during his hospitilization. We have also sent him an MP3 player with all of Srila Prabhupada’s lectures and songs.

Any devotees who would like to contact Jayo Das may send emails to me and I will forward to him, as I speak to him by telephone daily. For any other inquiries, prayers, visitation or assistance please contact me at Gajahantadas@aol.com

Please protect and care for Your dear devotee, Jayo dasa, who has served
You and Your pure devotee, Srila Prabhupada.

Your pastimes are unfathomable except for one who has a submissive devotional mood. You are known as Yogesvara, the master of
all mystics. You allowed Mother Yasoda to bind You simply because of her
deep and pure love for You. Please help Jayo prabhu to realize Your
glories deeper and deeper and to become fixed in service if you allow him
to stay in this world, or fixed in service at the next destination of Your
choosing. May Your holy names be his shelter now and forever.

Please keep Your sincere devotee, Jayo dasa, forever at Your lotus feet.
Please engage him in Your devotional service always.

Namo Vasudevaya. I humbly offer my prayer to You to bless Your devotee,
Jayo Prabhu, to be able to chant Your holy name and overcome his sufferings. Grant him peace and strength to be able to conduct the japa.

Please bestow Your merciful blessings upon Your dear devotee Jayo das. He
has given his young years to assist Srila Prabhupada in expanding the
sankirtan mission for Your pleasure. Now his body is giving him so many
problems, and He is in need of devotee association and encouragement.
Please make the necessary arrangements for him, so he can remember the
Holy names and Your merciful smile at all times during this trial time. I
also pray for his family and friends, that they may find the strength
during this time as well.

You are known in the three worlds as Jagat Guru and Patita Pavana because
of Your devotion and desire to save the conditioned souls…so please, if
You wish, just continue to shower Your most desirable blessings on Jayo
prabhu, he needs the shelter of Your lotus feet now more than ever.

I am begging your Divine Grace to kindly keep your dear disciple, Jayo
dasa, at your lotus feet. Please give him strength and faith to endure
this experience. Please, Srila Prabhupada, keep your dear servant who has
done so much for you near you– now and forever.

Please accept our very humble obeisances. All glories to Your devotee, the
most pure, our Jagad Guru, Srila Prabhupada!

Begging your Lordships today to please shower Your rain of mercy on a dear child of Srila Prabhupada-Jayo dasa. He is in a state of physical weakness but please give him strength to hold fast to the lotus feet of Srila Prabhupada at this critical time. Please arrange for some devotees to give him association and Krsna Katha at Denver and enliven and encourage him. We pray to You for all these things. Please accept this prayer and please bless Jayo das.

Please take care of this soul, Jayo Prabhu, who has helped You and other devotees in KC. I don’t understand the meaning of all these wonderful devotees in the last few years that are leaving us. Too many are now leaving and pretty soon what will this material world be without all these wonderful souls taking on so much to give to others.

Dear Lord Krsna who knows what is Your Divine plans we can only humbly accept that it is Your desire. But please make it Your desire to take care of this devotee who is in need right now.

Please shower Your mercy on this sincere devotee. Allow him to keep You in his mind and heart at all times. Please give him the spiritual and physical strength he needs at this time.

And Yet More books For Sale!
Looking for Leadership Position

New Ramana Reti’s plan for expansion of its facilities approved