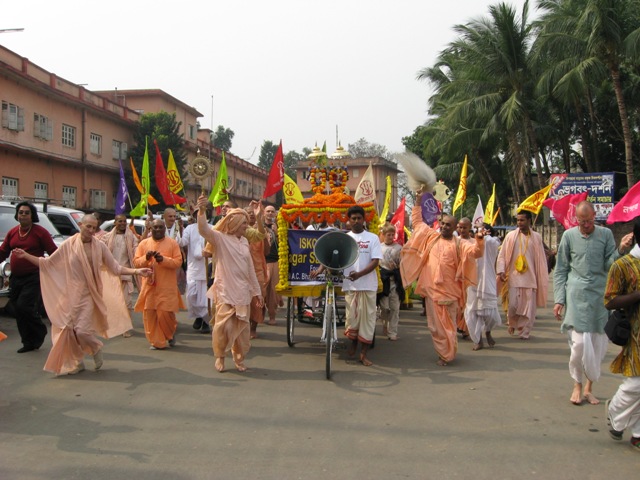 “The sankirtana pastimes of the Lord are unique, never before, in any other incarnation, were such pastimes ever revealed. As the kirtana picked up gusto, the Lord’s joy also increased. The devotees were carried in waves of sublime joy. The Lord and husband of the Goddess of Fortune was dancing on the streets of Navadvipa and anyone who saw Him became free from all sorrows. Soon it was dusk, but the devotees were perfectly engrossed in the kirtana, oblivious of the material realm. Standing in doorways, millions of men, women and children lined the streets seeing the moving mass of men whose tumultuous singing of the Holy Name of the Lord echoed and filled the cosmos. Above this tumult rang loud and clear the Lord’s own thunderous voice. The devotees replied with equal gusto, chanting the name of Lord Hari. Then magically, as if by previous arrangement, all the torches were lit at the same time? The Lord repeatedly called out the name of Sri Hari and the devotees became attentive. They surrounded the Lord with the kirtana party. All the devotees were decorated with flower garlands around their neck and their bodies were smeared with sandalwood paste and scented vermilion powder. They all had various musical instruments in their hands and looked more powerful than thousands of lions?. Chanting the name of Hari, He raised His arms up in the sky and danced. The knee-length flower garland around His neck swayed with each movement. His upraised arms glistened like fine tapering pillars of gold and His body became drenched with the incessant flow of ecstatic tears from His lotus petal eyes. As the ecstatic feelings increased, the hairs of His body stood on end like the ever-fresh kadamba flower. The Supreme Lord wears His fine and clean clothes very artistically. The high nose is aristocratic and the sinewy tendons of His neck give the impression of being the neck of the king of the forest, strong and powerful. He towers over others, His long body well formed and beautifully proportionate shining like a mountain of gold. Everyone looking at Him commented on His divine and beautiful presence. The millions who milled around for this momentous occasion were very fortunate and in spite of their large numbers, they all received the Lord’s benediction by being able to see the Lord’s exquisite transcendental face. They simply stared at Him, irresistibly drawn to His beauty and spontaneously exclaimed aloud the Lord’s name as uncontrollable emotions welled up within their hearts.”

This beautiful description almost exactly resembles the Harinam Sankitana Party as they carried the new Deities, Sri Sri Nitai-Mayapur-Chandra, all around Mayapur after Their Installation ceremony on Tuesday, 23 January 2007.

The Nagar Sankirtana Department was inaugurated officially in Mayapur in May 2007, after existing unofficially for one year, and now, finally, the most gorgeous, smiling Deities have been installed to accompany the Harinam teams all over the nine islands of Navadvipa. These Deities were carved at Ekachakra Dhama, the place of Lord Nityananda’s Appearance.

HG Pankajanghri Prabhu and HG Jananivas Prabhu kindly performed the Arati and Puspanjali Ceremonies on the Pancha-Tattva altar in the main temple. They chose this day to be most auspicious, since it was also Purnima and Pushya Abhiseka, a day on which the Deities are dressed in flower-outfits.

After circumambulating the Deities in the temple, the procession went outside and everyone took part in the wonderful Harinama procession that followed. Coloured flags waving, feet jumping and onlookers paying obeisances, smiling faces looking on, with the smile of Their Lordships being the broadest of all!

The Harinam Party also carried brass “Chand Kazi” signs. This emblem was given to Lord Caitanya Himself by the Chand Kazi, with the assurance that wherever the sign was carried, none of the Muslim followers of the Kazi would disturb the Harinama Party. Lord Caitanya added the tilaka sign to the centre of the emblem. The same sign was carried by many devotees during kirtana, such as Narottama dasa Thakur. Brass Chakra signs were also carried by the party.

Everyone agreed that the kirtana was magical, more ecstatic than ever before, and knew it was due to the presence of the Lord Himself in His Deity form. The Nagar Sankirtan Department aims at eng engaging each and everyone in the 9 islands of Navadvipa in hearing and chanting the Holy Names, to fulfill the desire of Lord Caitanya who inaugurated this activity Himself in Navadvipa 500 years ago. Now Lord Caitanya and Lord Nityananda are visibly present in Their Deity form once again to lead the Harinama and purify all with the sound of the Holy Name and sight of Their attractive forms.

The children were also engaged by handing out Prasadam (dry packet Prasadam) to onlookers.

The day’s activities ended with a Prasadam Feast at Srila Prabhupada’s Samadhi.

The Nagar Sankirtan department wishes to thank HG Ivesvara Prabhu and Teja Gaurangi dasi who sponsored the Deities as well as Their lovely blue outfits and the Feast. A great thank you to Adisvara Prabhu and Lila Vrndavana dasi for the repainting of the Deities and the making of Their jewellery. Thank you to HG Pankajanghri Prabhu and HG Jananivas Prabhu who performed the ceremony and offered valuable advice. And thank you to HH Bhakti Purusottama Maharaja and all the devotees who blessed us with their presence. 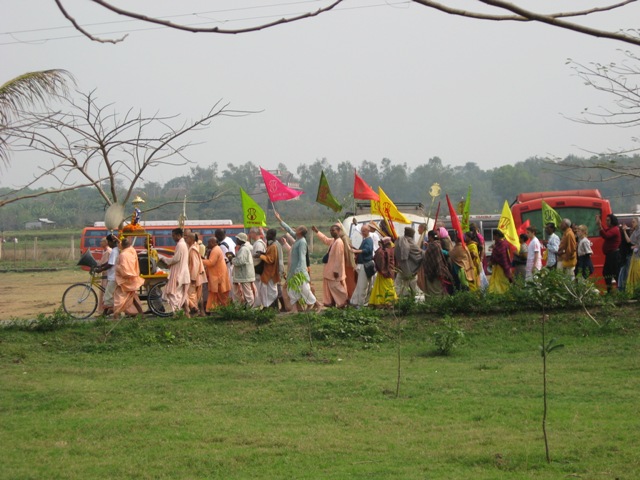