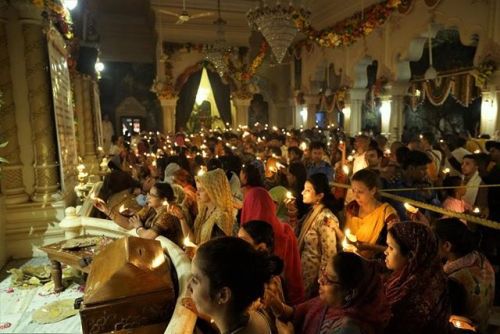 Transcendentally surcharged atmosphere in Vrindavana (4 min video)
THE JOY OF OFFERING GHEE LAMP TO THE LORD.
Lord Krishna has many glorious names like Gopal, Madhava, Mukunda, Hrishikesa, etc. The name, Damodara, means one who is bound by the ropes of love, and happened when The Lord was tied with a cord (daama) around His waist (udara), denoting a divine pastime in which Krishna’s mother Yasoda bound Krishna for being mischievous.
Through his pure willingness to be finally bound by the pure love of Yasoda, His divine mother, He becomes submissive to His mother’s love although in truth, no rope has the power to bind the Supreme Lord. It is this love that we hope to fill our hearts with, to bind Lord Krishna to us, eternally. This is beautifully illustrated in the Srimad Bhagavatam, which says, even though the Lord is greater than us in every single way, He is controlled and bound by the love of His pure devotee.
Just as there is no yuga equal to Satya-yuga, no scripture equal to the Vedas, and no place of pilgrimage equal to the Ganges, so there is no month equal to Kartika. Even unserious persons who execute devotional service according to the regulative principles during the month of Karttika, and within the jurisdiction of Mathura (or Vrindavana) in India, are very easily awarded the Lord’s personal service”. During the Kartika month millions of devotees worship Damodara Krishna with ghee lamps and devotional bhajans, glorifying His playful childhood pastime of stealing yogurt.
“When one offers a lamp during the month of Karttika, his sins in many thousands and millions of births perish in half an eye blink.”
“Please hear the glories of offering a lamp to Lord Kesava during the month of Karttika. O King of brahmanas, a person who offers a lamp in this way will not take birth again in this world.”
“By offering a lamp during the month of Karttika one attains a pious result ten million times greater than the result obtained by bathing at Kuruksetra during a solar eclipse or by bathing in the river Narmada during a lunar eclipse.”
“O Tiger among sages! For a person who thus offers a lamp burning with ghee or sesame oil, what is the use of performing an asvasmedha-yajna? ”
“Even if there are no mantras, no pious deeds, and no purity, everything becomes perfect when a person offers a lamp during the month of Karttika.”
“A person who during the month of Karttika offers a lamp to Lord Kesava has already performed all yajnas and bathing in all holy rivers. ”
“The ancestors say: When someone in our family pleases Lord Kesava by offering to Him a lamp during the month of Karttika, then, by the mercy of the Lord who holds the Sudarsana-cakra in His Hand, we will all attain liberation.”
“By offering a lamp during the month of Karttika one burns away a collection of sins as big as Mount Meru or Mount Mandara. Of this there is no doubt.”
“A person who offers a lamp during the month of Karttika attains a result that cannot be obtained with even a hundred yajnas or a hundred pilgrimages.”
“Even a person addicted to all sins and averse to all pious deeds who somehow offer a lamp during Karttika becomes purified. Of this there is no doubt.”
“O Narada, no sin exists anywhere in the three worlds that will not be purified by offering a lamp to Lord Kesava during Karttika.”
“A person who offers a lamp to Lord Krishna during Karttika attains the eternal spiritual world where there is no suffering.”
“As fire is present in all wood and may be extracted by friction, so piety is always present in the offering of a lamp during the month of Karttika. Of this there is no doubt.”
“O King of brahmanas, when someone offers Him a lamp on the full-moon day of the month of Karttika, Lord Krishna, finding that He does not have sufficient money to repay that gift, gives Himself in exchange for that lamp.”
“One who offers a steady lamp to Lord Hari during the month of Karttika enjoys pastimes in Lord Hari’s splendid spiritual world.”
Even one who never performs religious rituals or even the worst sinner will surely be purified by this offering. O Narada, in the three worlds there is no sin that can stand before this Kartika dipa. In fact, by presenting this dipa before Lord Vasudeva, the eternal abode can be reached without obstruction.
“All the results acquired by donating grains during pitri-paksha or by distributing water in the hot months of Jyeshtha or Ashadha are easily gained in the course of Kartika merely by reviving (relighting) a dipa offered by someone else.”
“In Kartik month, after bathing in the morning, one should worship Lord Damodara. At night, one should light brilliant lamps filled with either ghee or sesame-seed oil, and place them in these places – in the Lord’s temple, around the base of tulasi plants, and in the sky. During the month of Kartika, one should eat only vegetarian foodstuffs and Bhagavan’s prasad remnants. There should be incessant harinama-kirtana and smarana. The sole activity to be done during the observance of Damodara-vrata is the worship of Sri Sri Radha-Damodara.” – Srila Bhaktivinod Thakura
All glories to beautiful Lordship Sri Damodarji!
All glories to Kartik Masa!
Watch it here: https://goo.gl/8sCf5V

Visitors from East and Southeast Asia Initiated in Mayapur