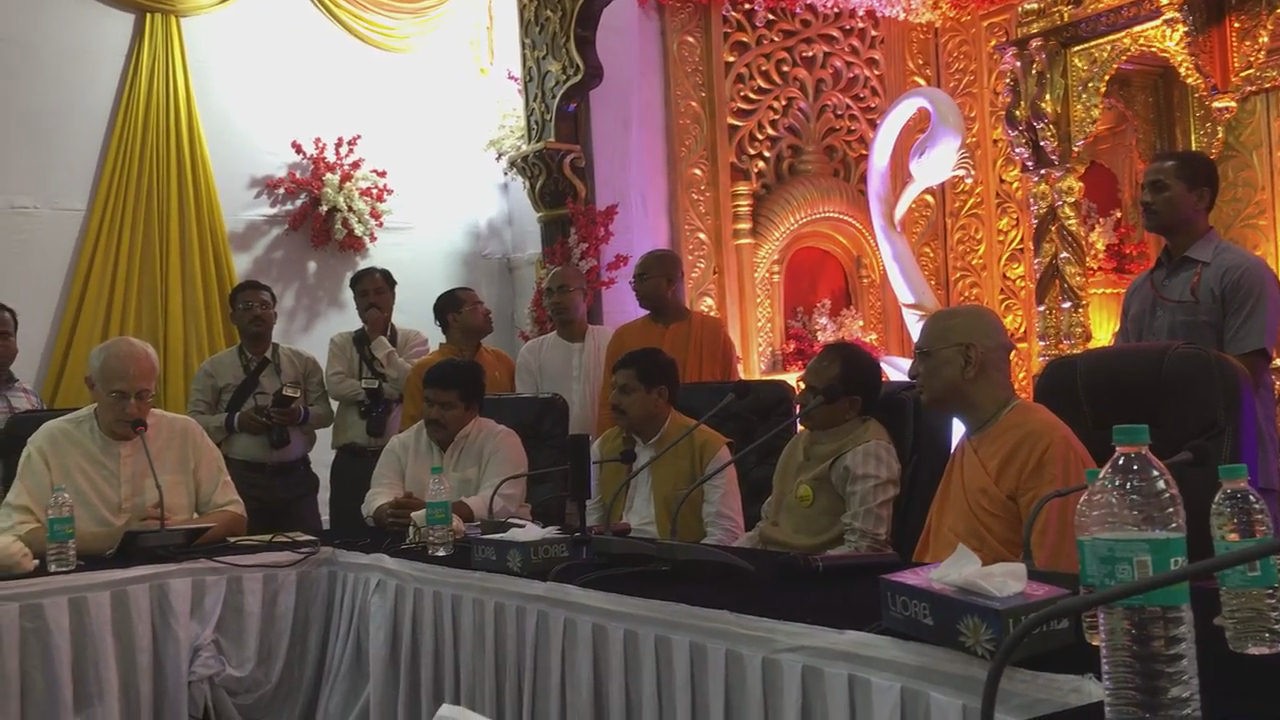 The Chief Minister of Madhya Pradesh, Mr. Shivraj Singh Chauhan, visited ISKCON Ujjain on 6th October. He was greeted by a large group of devotees chanting the Hare Krishna Mahamantra. As he stepped out of his car, he became so inspired by that kirtan that he also started dancing. His Holiness Bhakti Charu Swami garlanded His Honourable Chief Minister and welcomed him.

Since the temple Darshan was closed, both proceeded to a private meeting where His Holiness informed the Chief Minister about ISKCON’s mission and Srila Prabhupada’s teachings. He talked about how he was invited by the then Minister, Sushri Uma Bharati, to open a temple in Ujjain, but her initial promises were not met. However, he stayed on and started the project on the piece of land that the government had offered to ISKCON. Upon hearing that the Chief Minister assured him of all support.

The GBC mid-term meeting is going on in Ujjain now and when Maharaj told the Chief Minister about that, he expressed his desire to also participate in that meeting. His Holiness then escorted the Chief Minister to the conference hall where the GBC mid-term meeting is being held. While introducing the Chief Minister, His Holiness mentioned how the Chief Minister assumed his office practically when ISKCON also inaugurated the temple in Ujjain about 12 years ago. Since then the Chief Minister has remained in the office for 3rd consecutive term and under his able leadership, Madhya Pradesh had progressed so remarkably. The financial capital of Madhya Pradesh, Indore and the State capital, Bhopal, holds 1st and 2nd positions in the cleanest cities of India and Ujjain being the 9th. During the Kumbha Mela, one of the most prominent festivals, in Ujjain, last year, the government spent about a billion dollars to facilitate that festival, giving Ujjain city a tremendous boost. The Chief Minister spent about half an hour in that meeting sharing very sweet and intimate exchanges with our GBC members. In his speech, the opening sentence in his speech was, “My first identity above the Chief Minister of Madhya Pradesh is that I am a devotee of Sri Krishna.” Chief Minister was gifted with Bhagavad Gita, a set of Srimad Bhagavatam and Krishna Art Book.

After having the darshan of Sri Sri Radha Madanmohan, Krishna Balaram, Jagannath Baladeva Subhadra, Prahladesha Narsinghadeva and Gaura Nitai and garlanding Srila Prabhupada, the Chief minister left the temple while hundreds of devotees were chanting the Hare Krishna Maha mantra surrounding his car. While the Chief Minister was supposed to spend only 45 minutes with us, he graced us with 90 minutes of his precious time, for which we are immensely grateful.