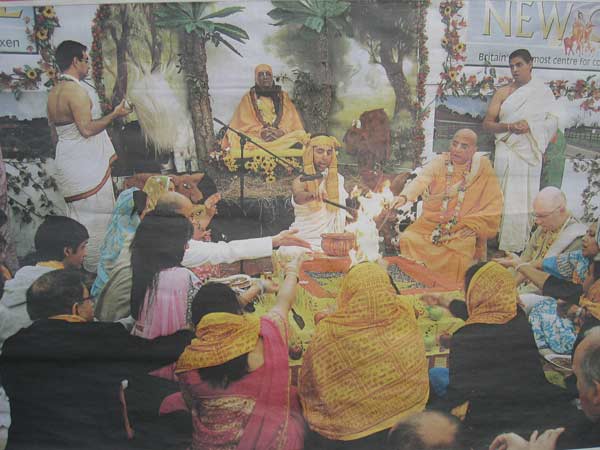 Over the past few years Bhaktivedanta Manorin the UK has been working closely with architects as well as members of the Manor’s Estate Development Committee to expand the current facilities occupied by our herd of 40 cows and oxen. The proposed building which has only recently on 30th August 2008 won a long battle to obtain planning permission will now have new facilities which will enable us to house our cows and oxen in a very impressive setting.

Plans for building Europe’s largest Cow Protection Centre, ‘New Gokul’, were approved by Hertsmere Borough Council after numerous planning applications and a pubic enquiry. Many councilors had indicated that they were impressed with the design and the sustainable character of the proposed farm buildings.

“In Britain, 3.38 million cows and bulls are killed every year. Nearly all young bulls die before they reach their third birthday,” concluded Gauri Dasa, “But at New Gokul, the new cow protection farm, we will demonstrate new ways of ethical, compassionate and sustainable farming.”

On Sunday 3rd February community leaders and dignitaries assembled at Bhaktivedanta Manor to take part in the ground-breaking ceremony, including the Bhumi Puja.

Bhumi Puja is an elaborate ceremony to ask permission from Mother Earth for our digging and excavation to build New Gokul. It included a Vastu ceremony based on the Vāstu Śāstra, (Sanskrit vāstu “site, building, house” and śāstra “treatise, instruction”). This is one of the traditional Vedic ceremonies for building anything from a house to a town or indeed the universe.

Vastu Shastra deals with various aspects of designing and building living environments that are in harmony with the physical and metaphysical forces (nature). Vastu is conceptually similar to Feng Shui in that it also tries to harmonize the flow of energy (Also called Life-force, and Prana in Sanskrit).

As part of the ceremony a Yajna is performed by chanting Vedic verses. The ceremony was ornated with four fires with priests offering oblations (Aahuti) in the Yajna.

The participants whether part of the central Yajna or simply observing the ceremony and listened to the Vedic Hymns will take away a feeling of compassion for living things. It is said such ceremonies have a balancing and harmonising effect on the world and its inhabitants. Indeed, the day after the event, the London’d Evening Standard newspaper published a colour centre spread photo of the yajna (the same image attached to this press release).

The event was blessed by the presence of Bhakti Caru Swami and the managing priest was Sri Radha Raman das who worked hard to make sure all the proceedings were in tune with Vedic tradition.

On the day there was also remembrances of Gangotri, the Belgian Blue-Jersey cow cared for at Bhaktivedanta Manor. Gangoti was killed by the RSPCA on 13th December 2008, whilst under the care of two vets and being looked after by two herdsmen. Campaign against the killing is spear headed by the Gangotri Task force made up of prominent Hindu organisations and Temples. After a demonstration on Boxing Day outside the RSPCA head quarters. The Campaign is now looking at legal avenues and a demonstration is being planned outside Parliament and DEFRA on 13th February 2008.

Sastra Dana Newsletter - February 2008
The last posting by (LILA) that is so wonderful and truly amazing!!