Ear: The Gateway to Liberation 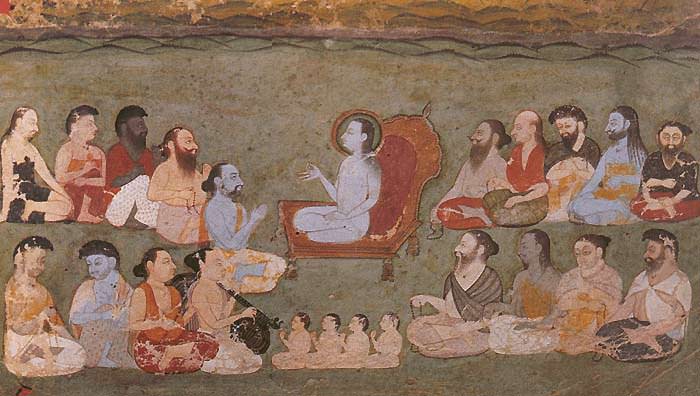 We may not realize how our aural organs play a vital role in determining our spiritual destination.

The human body is equipped with five senses through which one is connected to the external world. These five knowledge-acquiring organs, known in the Vedas as jnanendriyas (jnana, “knowledge”; indriya, “senses”), are the ears, eyes, tongue, nose, and skin. Through them we receive information about the external world, and based on that information we act and react.

Among these senses, the ears are more active than the other four. Srila Prabhupada explained the superior status of the ears:

Even the softest noise can be enough to wake a sleeping person.
Hearing Spiritual Sound

Usually people take great interest in hearing about mundane topics, reading newspapers and magazines or watching television. Thanks to the Internet now anyone from any corner of the world can access information, listen to music, or watch videos simply by pushing a button. But Srimad-Bhagavatam (2.1.2) condemns hearing mundane topics devoid of spiritual value:

“Those persons, who are materially engrossed, being blind to the knowledge of ultimate truth, have many subject matters for hearing in human society, O Emperor.” In commenting on this, Srila Prabhupada writes, “They have many subject matters for hearing—political, scientific, social, economic, and so on—but due to a poor fund of knowledge, they set aside the question of the ultimate miseries of life, namely miseries of birth, death, old age, and disease. Factually, the human life is meant for making an ultimate solution to birth, death, old age, and disease, but the grihamedhis [ignorant householders]; being illusioned by the material nature, forget everything about self-realization.”sukdev1

In spiritual circles hearing is the most highly regarded means for self-realization. The Vedic scriptures, especially the Srimad-Bhagavatam, consistently glorify the importance of hearing divine sound to achieve the highest spiritual perfection. Just as a sleeping man can be roused by sound, a man who is spiritually asleep, deep in the slumber of ignorance, can be woken up by transcendental, spiritual sound. Such sound will awaken him to spiritual consciousness. Simply by hearing from the mouths of pure devotees one attains ultimate destination, [SB 3.13.4] because they speak Krsna-katha to purify others and themselves [SB 3.6.36].

For that reason ears are considered the gateway to the spiritual world, because by letting the right sound enter our ears, we open the doorway to liberation. If we are fortunate enough to hear transcendental sound—the vibration of Krishna’s holy names or glorification of Krishna and His devotees—then the ears open the door to our hearts so that the Lord may enter. Srila Prabhupada writes, “The first and foremost of such devotional engagements is hearing about Krishna. This is a very powerful transcendental method for purging the mind of all misgivings. The more one hears about Krishna, the more one becomes enlightened and detached from everything that draws the mind away from Krishna.” (Bhagavad-gita 6.35, Purport) Sri Chaitanya Mahaprabhu, while spreading the sankirtana movement all over India, would plead with everyone He met, saying, “Wake up, sleeping souls! You have slept so long in the lap of the witch Maya. I have brought the medicine to destroy her illusions. Now pray for this hari-nama maha-mantra and take it.”

Just as red-hot cinders may smolder beneath a pile of hot ashes, love of God, though hidden, burns within the core of the heart of every living entity. And just as blowing air on hot cinders can rekindle a flame, hearing the glories of the Lord can invoke one’s dormant love of God and revive one’s connection to Him.
Step-by-step Effects of Hearing

When the sweet pastimes of the Lord, emanating from the mouths of pure devotees in the form of transcendental vibrations, pass through the ears and enter the heart, we feel relief from the burning miseries of material existence, just as one is soothed by a rain shower in the hot desert [SB 3.13.4]. By hearing about God’s activities one receives His mercy and gradually feels inspired to serve Him with love. [SB 1.2.17-21] systematically describes how our devotion to Krishna gradually evolves when we submissively hear the transcendental vibrations of Krishna’s holy names and pastimes:

Sri Krishna, the Personality of Godhead, who is the Paramatma [Supersoul] in everyone’s heart and the benefactor of the truthful devotee, cleanses desire for material enjoyment from the heart of the devotee who has developed the urge to hear His messages, which are in themselves virtuous when properly heard and chanted. By regular attendance in classes on the Bhagavatam and by rendering of service to the pure devotee, all that is troublesome to the heart is almost completely destroyed, and loving service unto the Personality of Godhead, who is praised with transcendental songs, is established as an irrevocable fact. As soon as irrevocable loving service is established in the heart, the effects of nature’s modes of passion and ignorance, such as lust, desire, and hankering, disappear from the heart. Then the devotee is established in goodness, and he becomes completely happy. Thus established in the mode of unalloyed goodness, the man whose mind has been enlivened by contact with devotional service to the Lord gains positive scientific knowledge of the Personality of Godhead in the stage of liberation from all material association. Thus the knot in the heart is pierced, and all misgivings are cut to pieces. The chain of fruitive actions is terminated when one sees the self as master.

Prahalada, the great boy saint, also recommends hearing above all other methods of devotional service. This is because hearing the pastimes and glories of the Lord is the basis of devotional service. It is through hearing that the Lord, in the form of sound, enters our hearts; the other processes subsequently follow. When with faith we hear potent spiritual discussion of Krishna’s glorious activities from bona fide sources, all inauspiciousness within the heart is destroyed like weeds yanked from a patch of earth. Gradually, in this fertile soil, the seed of true love for God takes root and germinates.

One who is genuinely humble and who has total faith in the words of the scriptures can achieve this love for the Lord. One need not be highly intelligent, well educated, wealthy, or advanced in years. It is not necessary to be a man or a woman, to be from a high caste or a low one. The only criterion is that one should, with faith and surrender, hear the transcendental message of the Lord.
Divine Sound for the Modern Age

The Vedic scriptures have recorded some of the most important of Krishna’s unlimited pastimes. And among all the Vedic scriptures, two are considered most important, especially in the current age: the Bhagavad-gita and Srimad-Bhagavatam. The Gita is the essence of all Upanishads because it is spoken by the Supreme Personality of Godhead, Krishna Himself; the Bhagavatam is considered the “ripe fruit of all Vedic literature.” If enough time is devoted to hearing and discussing these two scriptures, going back to Godhead is assured.

In addition, Chaitanya Mahaprabhu advised chanting the most powerful mantra for this age, the Hare Krishna maha-mantra, as the best means to counteract the degrading influence of the Age of Kali. The holy name of the Lord is the incarnation of Lord Krishna in Kali-yuga: kali-kale nama-rupe krishna-avatara [CC, Adi-lila 17.22]. It is all-powerful, even able to completely eradicate negative qualities like lust, anger, greed, envy, and false ego, which are the main causes of distress in the material world.
Dangers in HearingWhy-do-my-ears-ring-so-much

All that being said, we must carefully choose from whom we hear, because hearing from unauthorized sources can disastrously affect our spiritual lives. The Padma Purana strictly warns us against hearing from non-devotees:

“One should not hear anything about Krishna from a non-Vaishnava. Milk touched by the lips of a serpent has poisonous effects; similarly, talks about Krishna given by a non-Vaishnava are also poisonous.” Srila Prabhupada elaborates: “The words or songs of a person not fixed in Vaishnava behavior, not strictly following the rules and regulations and chanting the Hare Krishna mantra, should not be accepted by pure devotees.”

Furthermore, Srila Bhaktivinoda Thakura says that a practitioner of devotional service should never hear blasphemy of Lord Krishna or Vaishnavas. Wherever such noxious words are spoken, a devotee should immediately leave that place. One who, due to a weak heart and the fear of upsetting others, hears blasphemy of Krishna and the Vaishnavas gradually falls from the platform of devotional service.

The act of hearing, although simple, can award the highest perfection: pure love of God and eternal service to Him. Numerous examples testify to this. King Parikshit and Queen Rukmini, for example, are celebrated in the scriptures for their ardent hearing. Just to afford the transcendent opportunity that hearing offers, Srila Prabhupada established in all ISKCON temples the daily discussion of Srimad-Bhagavatam and Bhagavad-gita, and anyone can come to the temple and hear the transcendental messages of the scriptures. It behooves us all to take advantage of this process and thus prepare the way for our final journey—to go back to Godhead.

One Response to “Ear: The Gateway to Liberation”