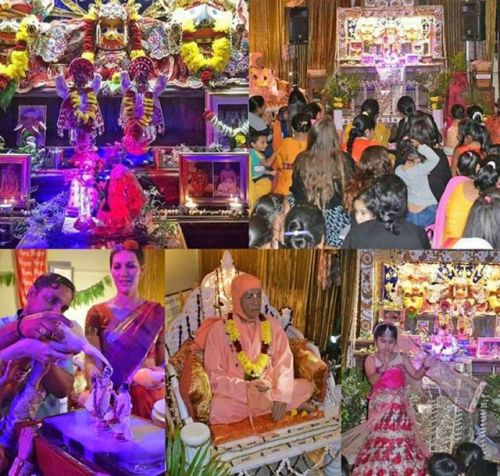 BHAKTI CENTRE SURFERS PARADISE, Queensland, Australia: FULL OF VERVE
Subhangi devi dasi: If you go to Surfers Paradise, especially on a Friday night, it is usual to see crowds of tourists gathered around a hari-nama party dancing and chanting.
The Bhakti Centre Gold Coast is a satellite centre for Radha Govardhanadhari that my husband, Jamal Arjuna dasa (ACBSP), established. I have tried to assist him in his preaching endeavours over the years.
The Centre facilitates those busy professionals working in the area who want to associate with other Vaishnavas to chant and learn about bhakti-yoga. They cannot always drive to New Govardhana, so the Bhakti Centre is the ideal point of contact for them. They take darshana of Jagannatha, Baladeva, Lady Subhadra, and Gaura Nitai along with Srila Prabhupada and engage in various services.
The Bhakti Centre was started approximately nine years ago. Jamal Arjuna had established a Govinda’s restaurant in the heart of Surfers Paradise and it became apparent that there was a need to further expand Srila Prabhupada’s preaching mission.
Many devotees who started their path to bhakti at the Bhakti Centre have taken initiation from various ISKCON gurus. There are families and many children attending our programs on Wednesday and Saturday nights. It’s not unusual to see all the little gopis and gopas who have grown up while attending the Bhakti Centre dancing enthusiastically in the kirtanas. This year alone more than 500 people attended the Centre’s Janmastami festival and there are ever-expanding preaching initiatives by our members.
Over the years we have had many home programs and even established worship of Gaura Nitai Deities in many homes. We also do hari-namas and have distributed a lot of Srila Prabhupada’s books in the streets and market stalls.
Several years ago, ISKCON’s ‘Vishvakarma’ Janmejaya dasa built a Ratha-yatra cart for parades Australia wide. We have even won awards for our cart and hundreds of thousands of people have seen the Lord, courtesy of the chariot.
We also sponsor various kirtaneers and arrange programs to help spread the holy name. Now we have a monthly kirtana and picnic in the Southport Broadwater Parklands. We also distribute prasadam at various vegan festivals.
Of course none of it would be possible without the ongoing support of our members and well-wishers.

The permanent situation of the form of the living entity

Parikrama Adhivas plus First day (Album with photos) After 4…

Lucy got the mercy! Vijaya Dasa: While in Alachua, I gave a…