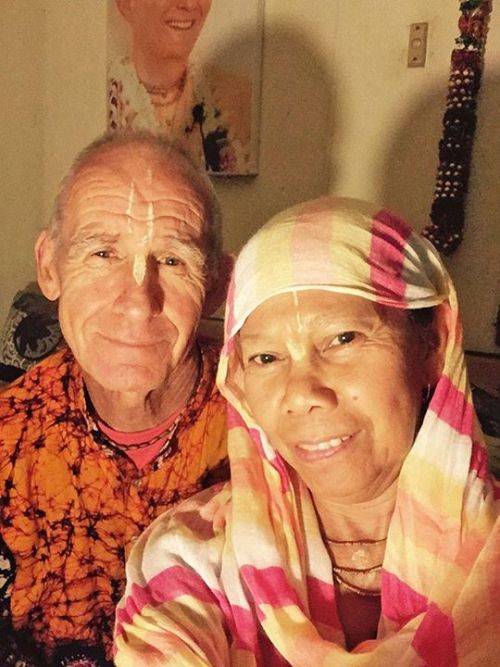 Meet Ranadhira Dasa And Madhumati Devi Dasi.
Clarissa Pollack: Avid Gardeners On The New Govardhana Property, Madhumati Devi Dasi And Ranadhira Dasa Have Been Sharing Their Love Of Gardening With The Local Community At Regional Markets.
“Our Produce Is Grown Using Traditional Natural Methods,” Says Ranadhira.
Ranadhira’s association with New Govardhana devotees began in 1988 when he helped to train bullocks for ploughing fields. He lived on the property for a couple of years and returned in 2007 to live here permanently.
Since 2009, Ranadhira and Madhumati have gardened together. Their methods are shared in a gardening pamphlet that they produced to describe their methods for gardening in the local climate and soil conditions. Copies of this pamphlet will be available to the temple soon. In the future, they also plan on producing one on traditional building using bamboo and earth.
The couple give informational lectures to others about the joys of healthy eating and food production.
Madhumati and Ranadhira are inspiring, long-term servants here at New Govardhana. Madhumati began her devotional life in Manilla, Philipines, in 1984. Her services included book distribution, serving with Food for Life, and finally as personal chef for her guru maharaja. After some years she moved to Australia in 2006.
Once in Australia Madhumati devoted her life to full-time temple service for the next nine years, which she describes “brought great joy”.