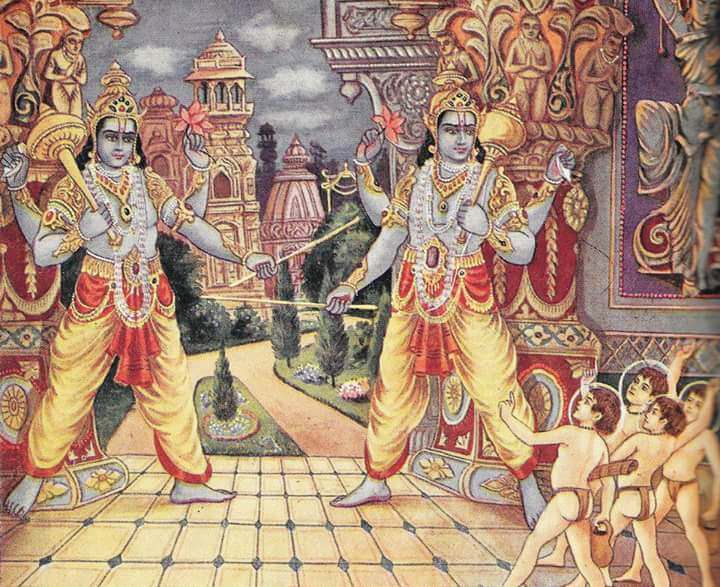 There are many valuable lessons to be learned by leaders who want to resolve conflicts between two parties amicably. It requires a great deal of spiritual maturity, patience, respect for both parties, mode of goodness to deal with issue etc.

On being pleased with both parties

SP writes : “When the Lord came, He was pleased with everyone; therefore it is stated here, krtsna-prasada-sumukham. The Lord knew that even the offensive doormen were His pure devotees, although by chance they committed an offense at the feet of other devotees……..On the part of the Lord there was no offended mood because He does not accept any offense created by His sincere devotee. But a devotee should be very cautious of committing offenses at the feet of another devotee. The Lord, being equal to all, and being especially inclined to His devotee, looked as mercifully at the offenders as at the offended. This attitude of the Lord was due to His unlimited quantity of transcendental qualities. His cheerful attitude towards the devotees was so pleasing and heart-touching that His very smile was attractive for them.” [SB 3.15.39 purport]

In conflicts one biggest problem is the distrust in one of the two parties, which feels that, “The decision was one-sided. We were not given enough hearing. They were heard first and perceptions were formed in mediator’s mind. So we are not happy with the final outcome.” Another problem is to not give up our love for someone serving under us, when they disobey us or act opposite to our wish or bring disgrace to us by their speech, actions or behavior. The material masters of this world may resort to screaming to vent out their frustration since they could not prove their greatness to the world, due to a disobedient servant. But Lord Visnu, did not give up His love on His subordinates despite their fault. If we want to follow this ideal behavior of the Lord, to smile upon both parties, we will have to connect with Lord’s unlimited quantity of transcendental qualities, by admiring Lord’s amazing and wonderful behavior. By repeatedly hearing such instances of Lord’s behavior and absorbing our consciousness in it, we’re likely to develop spiritual maturity necessary to become a shock absorber on one hand and a person who can exhibit transcendental behavior.

In verses, SB 3.16.7-12, Lord Narayana glorifies the Brahmanas and speaks out how much He respects them. He says, it is because of the dust of Brahmanas feet, which He Himself takes on His head, that has attracted Laxmi to be after Him and has made Ganga sacred etc. He also says that He is more pleased when people offer food with ghee to the holy mouth of such Brahmanas, than in Yajna kund, for His pleasure. Such glorification of Kumaras, made them immediately become humble and shy and glorify the Lord in return. Besides that it gave them the eyes to look at their own fault of cursing the doorkeepers of Lord’s abode (SB 3.16.24-25).

Once a team of four brahmacaris from Pune went on a Van party. In one place, some young boy was crossing the road at an inappropriate signal, due to which a ghastly accident was about to occur by our Van, but by Lord’s grace, the driver devotee could put a sudden brake and avoid the mishap. But then the driver went on a rage, stopped the vehicle, got down and got the left hand of the boy giving him a slap. The boy was murmuring, but didn’t retaliate. The Van party decided to park the Van under a tree and take lunch Prasad and then proceed with the journey. While they were eating, suddenly they saw over 40 youngsters of Dalith mob assembled around the Van screaming, “Who is that culprit who slapped our community boy? We have come with kerosene to burn down your vehicle and beat you all up.” Devotees inside the Van were almost completing their lunch, but were shivering in fear what to do now. They requested the driver devotee to beg forgiveness. The driver was of Ksatriya type and he said, “I have no habit of fearing such situations. I’m a fighter. I’ll fight like Arjuna.” When the mob identified Driver devotee as the one who gave slap, they zoomed on him demanding him to bow down and touch the feet of the boy whom he slapped. The Driver devotee refused and the steam started building up, erupting as bad words from the mob. In the meantime, one of the senior devotees in the Van reminded the Driver devotee, “prabhu, don’t you remember? How many times our Spiritual master has taught us to become — trinad api sunicena, taror api sahisnuna. You’ll not loose anything by bowing once”. Still the driver was not convinced. Then the devotee who gave the advice, bowed down to the boy, touched his feet and said, “Sorry.” But the mob was not satisfied. They said, “We know all of you other guys are proper, except your driver. We don’t want anyone else to bow except your driver.” Then again the devotees persuaded the Driver devotee, “prabhu, we don’t want to see Prabhupada’s Van burning in flames and we believe you don’t want to see us all beaten up either!” Immediately the Driver devotee bowed down for a moment and said, “Sorry” to the boy. Next moment, the whole mob dispersed like a fog in front of the rising sun!

You can see that in this world if we don’t give the due dignity for other living beings, we will have to pay a heavy price. On the other hand, by giving that dignity and respect, we can win heart of anybody. Srila Haridas Thakur could give that respect to a Prostitute and she turned into a pure devotee of Krishna. Prabhupada gave such dignity to Hippies without criticizing their faults and the result was that hippies turned into happies! Lord Visnu gave respect to angry Kumaras and the anger of Kumaras evaporated, bringing out the best Vaishnava qualities in them.

Winning the heart of doorkeepers, by not disowning them

When Kumaras are being praised by the Lord, it is likely that His doorkeepers may get put off, thinking, “Afterall we were doing the service of doorkeeping for Lord’s pleasure only. Now Lord seems to be upset with us and thus we are discarded. What is the use of our life? We have been disowned by our Master.” In order to save His servants from this type of grievance, Lord smiled upon them and also completely owned them by saying, “Since I have accepted them as my servants and have affectionately given them instructions, I become RESPONSIBLE for their actions too. Thus I am willing to lop of my arms for their fault.” (SB 3.16.4-6). Also, Lord told Kumaras that though my doorkeepers have offended you and you’ve cursed them to go to material world, I request you that let them return back to me as soon as possible, because after all they are my dear servants. (SB 3.16.12). This gave doorkeepers full assurance of Lord’s love for them despite their mistake. Vaikuntha gate

In relationships, people repose lots of expectations from one another. This often leads to frustrations because living beings do commit mistakes. Somebody has a habit of postponing the task, somebody is slow in doing, somebody commits blunders regularly, somebody has to be told the same thing a dozen times, somebody offers low quality service etc. what to do? To live peacefully in this world, we have to cultivate noble qualities like Forgiveness, Tolerance, Patience, Compassion, Humility etc. And Supreme Lord has these qualities in oceanic proportion.

In superior-subordinate relationship, trust builds more and more, if both parties agree to love, respect and trust one another without expectations. Since Lord Visnu trusted His servants and continued to love them despite their mistake, the servants also reciprocated in return. That is not to say that the Master should not rectify the faults of the servant. Lord Visnu admitted for the reformation program meted out by Kumaras for Jai-Vijay, namely, going to material world. He also said that His servants have acted with separate interest. Still Lord did not disown them, but forgave them and accepted them back in His service.