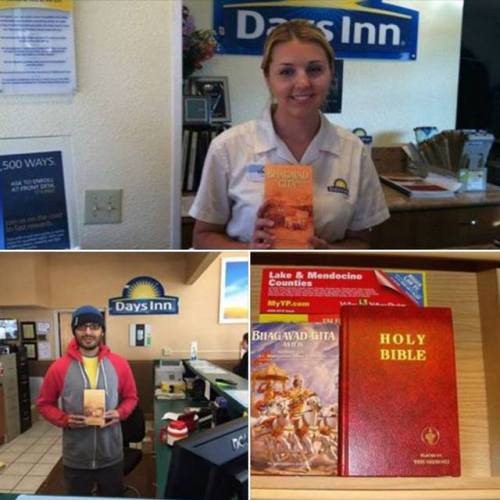 Motel Gita Project Places Hundreds of thousands of Bhagavad-Gitas in US Motel Rooms (Album with photos)
Till date, Motel Gita project placed hundreds of thousands Bhagavad-gita As It Is in motel and hotel rooms across the US.
This brings the Motel Gita project, which began in 2006, another step closer to its ambitious goal of 1 million Gitas.
Most of the Gitas placed in motel rooms were either distributed or sponsored by the ISKCON Silicon Valley community in San Jose, California, a book distribution powerhouse and current base of the Motel Gita project.
This program is also assisted by motlier Dilip Patel, one of the pioneers of the Motel Gita project, who began placing Bhagavad-gitas in his own Sea Breeze Motel in Pacifica, California, back in 2008.
Meanwhile in Tennessee, Harish embarked on a road trip around TENNESSEE cities placing hundreds of books in hotels or motels.
Find them here: https://goo.gl/teZ7At