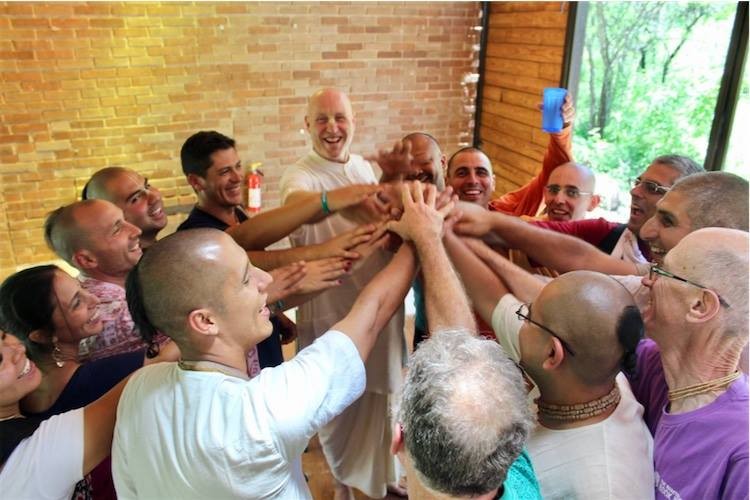 Nostalgia is nothing more than a sentimental longing or wistful affection for the past. Srila Prabhupada’s Marathon, the worldwide end-of-year push by ISKCON devotees to increase book distribution, is far from sentimental; rather, it motivates action now and increases the practical results. It is just as important today as it was in December of 1972 when the devotees in Los Angeles, California, started this now-traditional ISKCON event by one day spontaneously staying out late into the night to distribute Srila Prabhupada’s books just to please him. And none of the distributors knew that the others had decided to stay out late. It was a spontaneous burst of enthusiasm from everyone all at once, a burst that spread like wildfire throughout the ISKCON world, causing an explosion of new devotees eager to please Srila Prabhupada by distributing his books to the suffering masses.

And the reason these devotees extended themselves are as sound now as they were then; in fact, the masses are suffering now more than ever before. History proves that distributing books is an effective way to spread an ideology. Distributing Srila Prabhupada’s books is thus a highly effective means of spreading Krishna consciousness throughout the world to relieve the ever-increasing suffering of the conditioned souls.

In 1951 Srila Prabhupada wrote to R. Prakash, laying out his “threefold action plan” to spread Krishna consciousness all over the world:

In a 1972 letter to Jayadvaita, Srila Prabhupada wrote:

“These books and magazines are our most important propaganda weapons to defeat the ignorance of Maya’s army, and the more we produce such literature[s] and sell them profusely all over the world, the more we shall deliver the world from the suicide course.”

Massive book distribution is, has always been, and will for the foreseeable future be a sound strategy for spreading Krishna consciousness. Whenever someone takes the trouble to publish a book, people take it seriously. And when those books make their way into people’s homes, libraries, and schools, the ideas within the books come out and embed themselves in the reader’s minds and hearts, just as seeds come out from a flower and take root in fertile soil.

Using the written word to transform human society is a timeless weapon more effective than even swords and bombs in changing people’s minds and ways.

For example, in 1776, on the Eastern seaboard of what was to become the United States, four distinct groups of English colonies banded together, severed their links with Britain, and asserted their independence. How and why did they suddenly do this? Such an act of revolt would require the participants not only to be brave but also to have well-reasoned faith in its purpose and outcome. So, what prompted the colonists to risk their lives for this cause?

Historians say that Thomas Paine’s pen spurred them on. Paine wrote what was to become the best-selling, most widely read, and successful political pamphlet in history: Common Sense. Joel Barlow, American diplomat and poet writes about the effectiveness of Paine’s pamphlet:

Without the pen of Paine, the sword of Washington would have been wielded in vain.

In short, “the pen is mightier than the sword.”

Srila Prabhupada had full faith that his transcendental books, distributed throughout the world in multiple languages, would eventually penetrate society and bring people to new ways of thinking and acting. In 1974 Srila Prabhupada wrote to Hrdayananda:

“By printing these books of our Krsna Conscious philosophy in so many different languages we can actually inject our movement into the masses of persons all over the world, especially there in the western countries, and we can literally turn whole nations into Krsna Conscious nations.”

The Prabhupada marathon has become an annual event, and so one might take it for granted. It’s helpful, therefore, to recall not only the effectiveness of books but also the way in which Srila Prabhupada, our Founder-Acarya, emphasized the distribution of his books as a panacea:

“If there are amply books, everything else will succeed. Practically our Society is built on books.” (Letter to Yogesvara–Bombay 28 December 1971)

Those of us who have read and embraced the teachings in Srila Prabhupada’s books know how effective they are at elevating one’s consciousness. They bring us relief, free us of confusion, and give us real spiritual, happy life! Sharing this happiness with others not only pleases Srila Prabhupada, but it is also high sadhana. So please feel free to invest some of your time, energy, and money in the Prabhupada Marathon, which is now underway. Such an investment will bring you multiple returns and will help to save the world from its suicidal course.