Is Kali really the culprit? 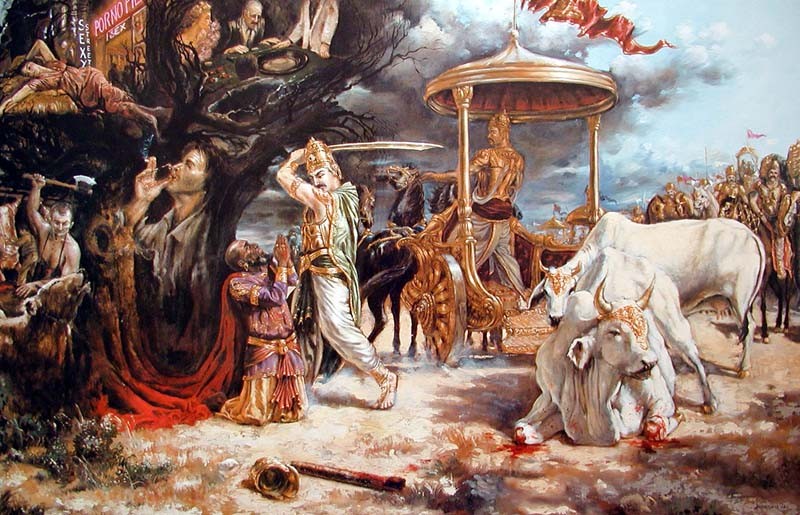 If Parikshit maharaja had killed Kali instead of forgiving him, we wouldn’t be suffering the effects of Kali now.’ Isn’t this a sensible argument? Let’s analyze…

Satya, Treta, Dvapara and Kali yugas with their respective symptoms are described in Srimad Bhagavatam in several places (11.5.19-32, 12.2.1-16). These ages are names as Golden age, Silver age, Copper age and Iron Age (1.1.21purport). This shows that the human beings who were provided an opportunity to purify their lives in the previous ages have not taken advantage, but have several times undergone the cycle of birth and death in this world and are not born in Kali yuga. It is nature of the material world that the conditioned souls become unruly and indulge in nefarious activities like aborting millions of children in wombs, organizing slaughterhouses for killing millions of cows etc. When atrocities go beyond limits, it is like a patient whose boil has become too ripe and filled with so many pusses that the Doctor has no other way to cure the patient other than operating with knife and scalpel. In the same manner, the Supreme Lord Krishna descends Himself and as various incarnations time to time, to re-establish dharma and give one more chance for the living beings to take up to religious practices.

Thus Parikshit maharaja, wanted to protect his citizens from onslaught of Kali, but at the sametime, he did not want to act against Lord’s will of allowing Kaliyuga to take its own direction of destiny. Also it is said, that Parikshit did not become envious of Kali, but he kept Kali in bay by administrating his praja in such a way – by utilizing all Gold for Sankirtana and prohibiting all sinful activities of animal slaughter, gambling, prostitution and intoxication. (1.18.7purport) Just like, if on a rainy day, there is a heavy downpour of acids from the sky, will somebody allow his body to be hurt by bruises caused by such a rain? Rather, one will carry an umbrella to protect oneself from such a rain. Similarly, those who are lazy for spiritual life, blame the age of Kali and say, “Everyone is committing sin; why should we be an exception; no one can be pure in this age.” And they go on with sinful activities preparing a ghastly future for them; such people have to be born again and again and that too in the age of Kali yuga, which is going to go from bad to worse towards the end. But in the beginning of Kali yuga, for the next 10,000 years Krishna consciousness movement will expand to all over the world, like a flood of Sankirtana. One should take part in this movement, purify one’s heart and return back to Godhead, rather than blaming the age of Kali yuga.

In the Skanda Purana, as well as in other Puranas, there is the following statement: maha-bhagavata nityam kalau kurvanti kirtanam. “During Kali-yuga the great devotees of the Lord always engage in kirtana, chanting the Lord’s holy names.” It is the nature of the Supreme Personality of Godhead to be merciful, and He is especially merciful to those who, in a helpless condition, take complete shelter of His lotus feet. One can immediately take shelter of the lotus feet of the Lord by chanting His holy names.

According to Sridhara Svami, even in previous ages such as Satya-yuga it was not possible for the living entities to achieve the perfection that is available in Kali-yuga. Srila Jiva Gosvami has explained this as follows. In former ages such as Satya-yuga human beings were perfectly qualified and easily performed even the most difficult spiritual processes, meditating for many thousands of years practically without eating or sleeping. Thus, although in any age one who completely takes shelter of the Lord’s holy name gets all perfection, the highly qualified inhabitants of Satya-yuga do not consider that merely moving the tongue and lips, chanting the Lord’s holy name, is a complete process and that the Lord’s holy name is the only shelter within the universe. They are more attracted to the difficult and elaborate yoga system of meditation, complete with sophisticated sitting postures, painstaking control of the breath and deep, extended meditations in trance on the Personality of Godhead within the heart. In Satya-yuga sinful life is practically unheard of, and therefore people are not afflicted with the terrible reactions seen in Kali-yuga, such as world war, famine, plague, drought, insanity, etc. Although in Satya-yuga people always worship the Personality of Godhead as the ultimate goal of life and meticulously follow His laws, called dharma, they do not feel themselves to be in a helpless condition, and thus they do not always experience intense love for the Lord.

However, in Kali-yuga living conditions are so unbearable, modern governments are so obnoxious, our bodies are so ridden by physical and mental disease, and even self-preservation is so trouble-some that the conditioned souls intensely cry out the holy name of Krsna, begging for relief from the onslaught of this age. The members of the Krsna consciousness movement have vivid and unforgettable experiences of the terrible contradictions inherent in human society in this age, and thus they are firmly convinced that there is nothing to be achieved except the mercy of the Supreme Lord. In ISKCON centers throughout the world we observe wonderfully ecstatic kirtana performances in which men, women and children from all walks of life chant with startling enthusiasm the holy names of Krsna and dance in ecstasy, becoming completely indifferent to so-called public opinion. In America a prominent professor from Oberlin College visited a Hare Krsna center in California and was astonished by the enthusiasm with which the devotees chant the holy name of Krsna in their congregational performances.

Thus, due to their helpless and pathetic condition, the living entities in Kali-yuga have great impetus to surrender fully to the holy name of Krsna, putting all of their hope and faith in the Lord’s holy name. Kali-yuga is therefore the best age because in this age, more than in Satya-yuga or other ages, the conditioned souls become disgusted with the kingdom of illusion and surrender fully to the Lord’s holy name. This status of full surrender is called paramam santim, or supreme peace.

Relating to Devotees with Due Respect

Duress and Accepting the GBC as the Ultimate Managerial Authority