Two Essential Keys To Increase Our Attraction To Sri Krishna 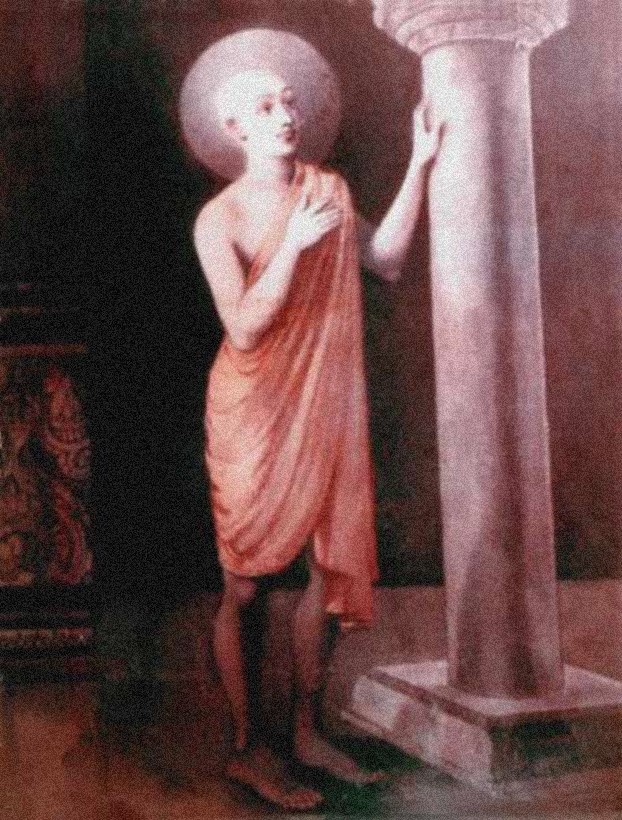 Our greatest problem is that we have turned away from Krishna. This one action has turned into our existential dilemma. We are lost servants. But strangely we think, at least unconsciously, that it is Krishna who has abandoned us. Only when we become eager to meet Krishna again, and serve Him with body, mind and heart – as eager as a drowning man is eager to breathe again – can we attain our spiritual success. Real love, however, will only flow when we move out of the center and put Krishna there.

For that, hearing about Krishna’s divine characteristics, activities and His sweet relationships with the devotees, is essential. Lila or Krishna’s pastimes, is defined by Srila Visvanatha Cakravarti Thakur as that which nourishes and protects us and then gives us an intense desire to attain Krishna (samvardhanam samposanam laulyam dadati lila). When we are fully nourished with Krishna consciousness, we do not feel the need to go to maya in search of false shelter. Krishna affords us with the best protection. So as a result of hearing again and again about Krishna, an intense desire to attain Him is installed in our heart. That is the potency of Krishna-lila. It works for sure.

It was the fourth day of narrating the Bhagavatam. Sukadeva Gosvami was speaking the glorious Srimad-Bhagavatam to Maharaja Pariksit, the heroic King of the Earth who had been cursed to die within seven days. Pariksit Maharaja had decided to renounce everything and dedicate his remaining days to hearing exclusively about the glories of Sri Krishna. Fasting even from water, he only wanted to be nourished by the glorification of the Lord from the lotus mouth of Sukadeva Gosvami. At one stage he asked an intriguing question about Krishna (Srimad Bhagavatam 10.12.41). Because the question related to Krishna’s expanding Himself in innumerable forms and exchanging personal divine relationships in these forms with every devotee in Vrndavana, Sukadeva was overwhelmed in remembering Krishna’s love for His devotees and thus he fell into a swoon. “Sukadeva has fainted – the flow of nectar is finished.” The sadhus who sat around Sukadeva were anxious. When Pariksit Maharaja saw his guru lying on the ground, he became especially worried.

When Narada, Vyasa, and the other saints who were in attendance, started loud chanting of the holy names of the Lord, Sukadeva came back to his external perception. Then and there, he explained he had lost his consciousness because Pariksit Maharaja´s question caused him to become absorbed into the Brahma-vimohana-lila in which Krishna expanded Himself in a way whereby which He could interact with each one of His devotees – including the cows – in a very intimate way.
The Lord loves His devotees so much that He expands for each single one of them! Amazing! Although this is only one of the many, many lessons in this pastime, it is the one, which I appreciate the most.

Sri Krishna was individually present each day with each one of His friends (sakhas) by His lila-shakti potency. Each of them perceived that Krishna was giving full attention only to him/her.
Once, Krishna sat down with His friends at the riverbank of Yamuna in an extremely beautiful and pleasing atmosphere. The cowherd boys could see the blooming lotuses everywhere and hear the attractive noises of the bees and birds that echoed through the trees in the forest. Krishna, like a blue sapphire, sat in the center, encircled by lines of His friends. Because the Lord’s beauty, words, and singing are so attractive, all the boys sat looking towards the center. Out of their love, they wanted to face Krishna. Krishna fulfilled their desire by employing His sarva sankalpata shakti to make His face and limbs appear in all directions at once. In this way Krishna’s friends, the cowherd boys, became acyutatma – fully absorbed in Acyuta, the infallible Lord. Thus, each single boy thought: “I have the best place: I am sitting directly in front of Krishna.” They sat in rows around Krishna, like the whirl of a lotus flower, which is surrounded with its petals – only there were millions and billions of cowherd boys. And they all laughed, conversed, sang, etc. with the Lord, overwhelmed in the loving reciprocation.
Furthermore, to fulfill the desires of each and every devotee, Lord Krishna manifested the pastime in which Brahma stole the calves. Lord Krishna smiled and expanded as each missing cowherd boy and calf in order to receive love from each mother, father and cow in Vrindavana. When Krishna came back, Vrindavana became submerged in an ocean-like festival of love in which everyone happily drowned. Everything in Krishna is attractive to a superlative degree – His smile, His bodily form, His flute play, His gait, even His correction, etc., so in order to keep with His quality, Krishna gave more love than the children or calves would have ever given to their own mothers. He was supposed to be exactly like the kidnapped children and cows – but in that one aspect, He was not an exact copy. The way each cowherd boy and each calf gave and received love from each and every mother, father and cow in Vrindavana was unprecedented. By His divine potency, Yoga-maya, Krishna became the son of all the inhabitants of Vrindavana and reciprocated with their desires to have Him as their beloved son. Krishna gave more love than the children or the calves would have given to their own mothers and fathers. Some philosophers have criticized this as a fault in Krishna, but actually it shows the power of divine love, which makes even Krishna go beyond the established plans or rules. Krishna was supposed to be like the children, but His display of love was unlimitedly greater.
Isn’t that the specialty of the bhakti tradition? It is the yoga of divine emotion. In the Gita, Krishna explains that passionate love for Him is a higher and easier process of spiritual enlightenment than focusing on impersonal meditation.
However, in practicing bhakti and trying to increase our attraction, doubts may appear in our lives. We then start questioning the Lord and His activities. This attitude inevitably leads to false pride.

What does Krishna do when He sees that His devotee has become proud?

Krishna shakes every devotee by putting him or her into a position where his/her self-confidence breaks, so that the devotee has the opportunity to take full shelter of Krishna.

Bhakti is never an emotion of this world. It comes from the transcendental domain. For bhakti to descend, the devotee has to come into a humble position of mind in which he can offer humble prayers in full self-surrender. Out of His mercy, Krishna shows us within our life our own limitations and in this way deconstructs our pride. Only then can genuine humility manifest itself. When Krishna sees a devotee has become proud, He always brings him down from this dangerous position, where a fall-down is almost guaranteed. He does this by frustrating the abilities of His devotee. In devotional life the way up is almost always the way down. In other words, only through humility can we become elevated to the spiritual world. In the Brahma-vimohana-lila, Krishna shook Brahma’s self-confidence to awaken him to krishna-bhakti.

For Krishna, a whole year passed where He was immersing Himself and the Vrajavasis in the ocean of divine loving reciprocation. For Lord Brahma, who lives in a different time frame, only a second had passed. When he returned to Vraja, there was a great surprise waiting for him – a volcanic eruption of love that drowned every single resident like a stream of love. Finally, Krishna showed Brahma the actions of His Yoga-maya potency by revealing how each and every expansion of the cowherd boys and calves was a Vishnu expansion. All the calves and cowherd boys transformed into a beautiful four-armed Vishnu form. In this way, Krishna told Brahma: “You chant this mantra om namo bhagavate vasudevaya. See, here are unlimited expansions of Vasudeva Krishna, and they all come from Me: that little cowherd boy, holding a flute and a cowherd herding stick in one hand and a lump of sweet rice mixed with fruits in another. Don’t doubt any longer that it is Me who is the cause of all causes.”

In the Brahma-vimohana-lila, Lord Brahma understood his lessons. After seeing the divine manifestations of Krishna’s opulence, he hastily got down from his swan carrier, fell down like a golden rod and touched the lotus feet of Lord Krishna with the tips of the four crowns on his heads. Usually, the demigods never touch the ground. They always float a little bit above the earth. But when Brahma saw the greatness of Krishna, he voluntarily gave up his prestige of being the leader of the demigods. Brahma has four heads, which means that his intelligence works in every direction, but he surrendered everything before little Krishna and with tears of repentance he washed the lotus feet of the Lord. He was so much moved that he was unable to compose himself; rising and falling again and again at Krishna’s lotus feet, he could only remember the greatness of the Lord. Then wiping the two eyes on each of his four faces, he slowly got up and began to offer prayers with the utmost humility, respect and attention. One of his prayers is:

“For those who have accepted the boat of the lotus feet of the Lord, who is the shelter of the cosmic manifestation and is famous as Murāri, the enemy of the Mura demon, the ocean of the material world is like the water contained in a calf’s hoof-print. Their goal is paraṁ padam, Vaikuṇṭha, the place where there are no material miseries, not the place where there is danger at every step.” (Srimad Bhagavatam 10.12.58)

May all of us take inspiration from this wonderful pastime, where the powerful creator of the material world is overwhelmed by the majestic opulence and sweetness of Lord Krishna. May we all pray to the Lord and sincerely appeal for His compassion. I wish to end this katha (narration) with a sincere appeal for Krishna’s compassion.

O Lord Krishna, I have fallen into this world and am helplessly in the hands of material nature. My original desires have been replaced by desires that are not my own.

I am slowly drowning in the ocean of maya. Although I have been calling for help, no one has heard me.

Please,  O Lord, take me in the safe boat of Your mercy. O ocean of compassion – don’t abandon me, please rescue Your lost servant.

O Lord – if You look for my qualifications, You will find none. Your forgiveness is my only good quality. Please give me the service of the devotees who are dear to You. Please, O Lord, hand me the rope of Your mercy and pull me up. O ocean of compassion – don’t abandon me, please rescue Your lost servant.

When Krishna sees that we turn to Him by hearing about His glories, He becomes attracted and sits on the lotus of our hearts, where He purifies all the dirt of material existence – some of it already millions of years old!