Hare Krishna the Movie Coming Soon to Theaters in Latin… 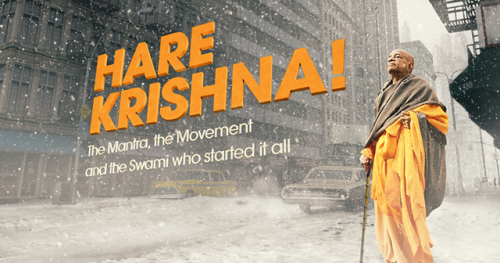 Hare Krishna the Movie Coming Soon to Theaters in Latin America!
The independent Documentary Film: “HARE KRISHNA! The Mantra, the Movement and the Swami Who Started It All,” had its world premiere at Illuminate Film Festival on June 3rd in Sedona, AZ. It sold out in 30 minutes and won the Grand Jury Prize for Best Film. This was followed by a North American release in theaters beginning in New York City on June 16th, 2017, where the opening weekend saw the Film have the highest weekend per-theatre average of box office proceeds among all reported releases in the USA. In India, which started on December 15th, the Film has been playing on over 400 screens across the country.
Now the Film is making its way around the world and is the time for Latin America to have a glimpse of Prabhupada’s greatness! With your help, we would like to cause an IMPACT in Latin America with this Film.

Here is how you can help:

1. Suggest responsible, well educated and dynamic persons to work with us on marketing and distributing the Film.
2. Pass on any contacts you have in the film distribution industry or contacts you have with movie theater owners.
3. Study our Outreach Guide & Toolkit and follow its instructions
4. Promote the Film on Facebook, Twitter, Instagram, Radio, TV and every possible means of communication.
5. Recruit the help of celebrities to promote the Film.
6. We already have the Film with Spanish and Portuguese subtitles.

Director John Griesser (a.k.a. Yadubara das) said at the release of the Film, “It is exciting beyond words to revisit Prabhupada’s extraordinary life and share it with others in a Film I feel offers rare insights into his multifaceted personality and enduring message of happiness and hope.”

A variety of American publications agree:

“An uplifting spiritual experience regardless of one’s personal beliefs or religion.” – Red Carpet Crash
“HARE KRISHNA! achieves a cinematic flow that takes you out of the theatre and into the moment.” – LA Yoga
“…effectively summons an evocative moment in time.” – LA Times

We are counting on you to make this Film a complete success throughout Latin America.

Please get involved today by replying to this email.

Tails of New Vrindaban: “Malati the cow.” Malati was…

Wedding of Sudarshan & Rukmini in Mayapur (Album with…