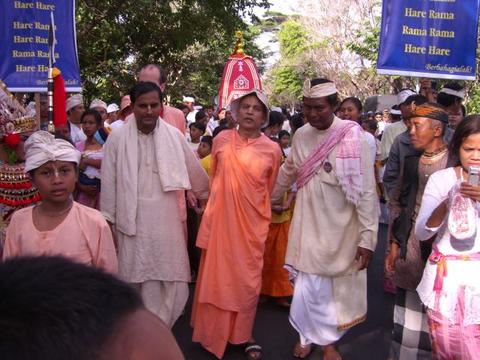 For those who may be wondering, His Holiness Subhaga Swami is recovering very blissfully in Bali, staying at the Radha Rasesvari Mandira. On Saturday the 21st of July, the devotees in Bali held a public seminar titled, “REINCARNATION AND KARMA”. It was very well attended by many leading citizens of Denpasar.

Kavicandra Swami gave the keynote introduction which was followed by many speakers and panel discussions. The panel consisted of a professor of Buddhism, a professor of Christianity, the vice governor representing Islam, and Agastya Prabhu representing ISKCON. It was a very lively discussion and the audience was very happy.

Visvambhara Prabhu, who has a PhD from India, and is now head of the University for Hindu studies, gave a presentation. Then Sundarananda Prabhu gave a nice power point presention on “Jiva Tattva”. At the end, when it was time for prasadam, the special guest, HH Subhag Swami was asked to speak. His was so blissfully energetic that everyone forgot to eat and the questions and answers went on for some time.

Sunday was Jagannath Ratha Yatra, about which more news will come. Again HH Subhag Swami was ecstatic, speaking beautifully about Lord Jagannatha and Vrndavan Dham. Then he led kirtan, singing perfectly a Balinese melody. After that he joined the parade for a short time and swept the road. He can walk for a short time without a cane but mostly he uses a walker or his caretakers assist him. The devotees are very happy with his powerful and strict preaching. We are sorry that he was injured, but it has become a blessing for the devotees here and he loves Bali.

I think the attached photos give a very good view of the situation. More pictures from BALI RATHAYATRA here

Nama Yajna
Do we need a Guru approval system?