The National Prayer Breakfast was inaugurated in 1950 by members of the Executive Branch, the United States Senate and the House of Representatives Breakfast Groups to specifically seek the Lord’s guidance and strength as well as to reaffirm our faith and renew the dedication of our Nation and ourselves to God and His purposes.

To encourage men and women throughout Arizona, this year’s Breakfast in Phoenix, Arizona was inaugurated by Arizona Governor Janet Napolitano in presence of 250 leaders from all walks of life. 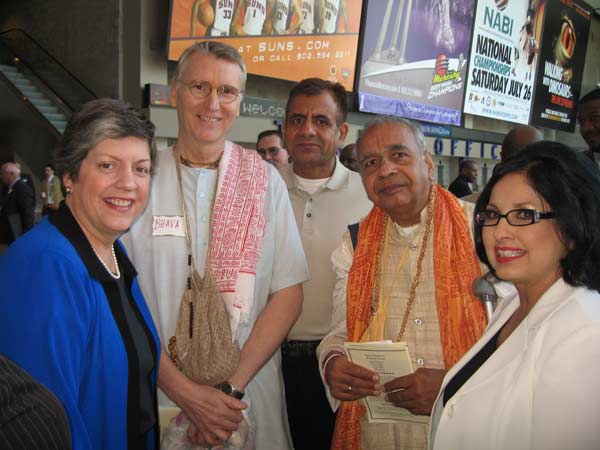 Hare Krishna devotees have participated in the first ever such Breakfast held in Capitol in 2003, and have continued attending the event to show our support to the Community as a whole.This year, Bhava dasa, President, ISKCON of Phoenix, accompanied by Sri Surinder Sharma, Board Member of the Executive Committee ; and Dr Prayag Narayan Misra, Director of Communications -met the Governor, inviting her to attend forthcoming Sri Krishna Janmashtami Festival on August 23.

Another noteworthy VIP attending was Mayor George Nerhan of Huachuca, born and raised in Patiala standing in the middle [ see photo below]:-

For other photos at the event, please click here.

For the record, the Governor has issued two Proclamations for Lord Krishna’s Appearance Day in 2006 and 2007, thus becoming the first ever government official in the world to declare so. Also, two years ago she attended Hari Naam- Glorification of the Lord’s Names – in down town Phoenix while passing by, and greeted devotees as well as posed for photos.

Visit this website for photos, which has more than 8,000 hits:-

Dancers For Krishna
From Climate Crises to Food Price Crises: What is going on?