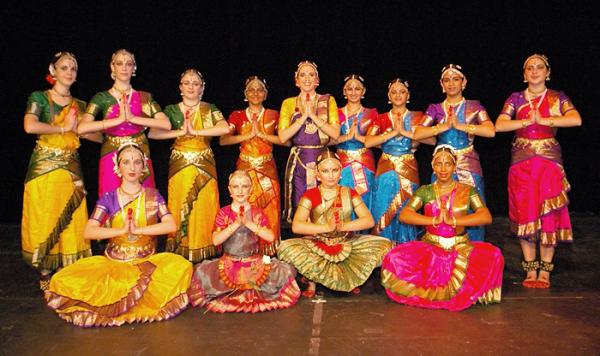 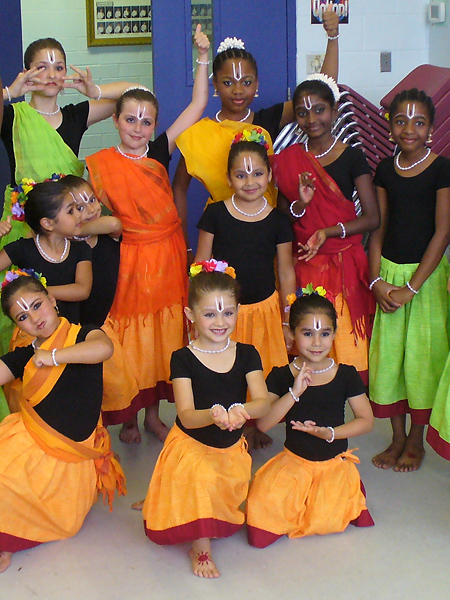 In the small North Central Florida town of Alachua, there is a well known, booming community of Vaishnavas called New Raman Reti. I am a very happy and content resident of this lively and beautiful congregation. I participate and give back to the community by directing an academy called “Bhakti Kalalayam” (Devotional Arts Refuge) which trains and engages young girls and boys in the sacred art of Bharatanatyam (South Indian Classical Dance).

By Srila Prabhupada’s mercy I was born into this ISKCON movement as an aspiring devotee of Lord Krishna and by the good fortune of my parents, Jagat Purusha Prabhu and Mother Cinmayi, I was exposed to the classical arts of India. Since the age of five my Dharma, or prescribed duty, in life was quite obviously dance. By some good fortune I was blessed with the opportunity to study Bharatanayam at that early age. By the time I was fourteen years old I had decided on a career, a lifestyle and a vision of what I could do for Srila Prabhupada’s movement in my own humble way. What followed were seven years of vigorous and intense dance training in South India with my new found dance guru Srimati Indira Kadambi. During these years of physical and emotional hard work I prayed to Srila Prabhupada daily to please give me a chance to use my talents in his service. At the time I had no idea where this service would take me, I only knew I loved to dance, and I was told that I was good at it. I had a grand “Arangetram” (dance graduation) in Bangalore India and every news paper in the city was there to review my performance. Not only because I was an American but I openly stated that I was a devotee of Krishna. This was too unusual for the reporters to miss. The reviews were encouraging and after receiving my teachers blessings, I returned to the USA with the desire to teach.

In the fall of 1999 I moved to Alachua and had a small class of eight young girls who I taught in the temple room while the deities were resting. The number of students steadily expanded each year and I am currently the proud teacher of over fifty students in Alachua, Gainesville and Ocala.

Bhakti Kalalayam has a beautiful home in a converted barn fully equipped with floor to ceiling mirrors and a “knee-friendly” dance floor. The Barn was donated to the academy by my loving In-laws Kirtiraja Prabhu and Mother Haripuja, on whose property it stands. The renovation of the barn was made possible by generous donations from Jitari Prabhu and Mother Rangavati, Devarshi Prabhu and Mother Nirmala as well as by some fundraising performances by the academy’s dancers. The beautiful setting is a dancers dream; it is secluded yet near the temple and has central heat and air. During class sometimes peacocks peer in the glass doors to watch the students dance.

Bhakti Kalalayam conducts 32 weeks of dance classes throughout the year. In addition the academy presents an annual performance in a formal auditorium in Gainesville. Twice a year we are invited to conduct workshops at the local community college and the University of Florida. Bhakti Kalalayam also hosts workshops by my dance guru Srimati Indira Kadambi and Odissi dance guru Vishnu Tattva Prabhu. In addition to performing for Temple festivals, we perform at events such as art festivals, Earth Day celebrations, etc. Performing at these events gives great opportunities for introducing people to Krishna consciousness.

Our growing involvement with the ISKCON Vaishnava Youth Ministry Summer bus tour has given our dance troupe the great experience of performing for many, varied audiences throughout North America. Manu Prabhu and Mother Jayaradhe, the organizers of this successful annual tour, are not only my dearest of friends but they are great well-wishers and supporters of the Bhakti Kalalayam Academy. They comment on the importance of our presence on the tours “Bhakti Kalalayam has been an integral part of the Krishna Culture Festival Tour for the past 3 years. They have transformed our performances in theaters and university auditoriums into a truly vibrant cultural presentation. Looking back, we don’t know how we ever did a tour without them.”

Six of my original students have continued their dance training for the past eight years. These beautiful girls are extremely committed to their dance and have the good fortune of the devotees’ encouragement.

Every week they are in dance class learning new dances, practicing old ones, building stamina and preparing for performances. Bharatanatyam may seem effortless but for each dance it may take three months or more to perfect. I have been blessed with a wonderful school and the Bhakti Kalalayam dance troupe has emerged from it. All of my hard work and dedication to these students is rewarded when I watch them perform. These girls help arrange performances, and teach new students at the Academy. Some of the dancers of Bhakti Kalalayam express: “Dance, devotion, spiritual friendship, and spreading Srila Prabhupada’s message. That and more is what makes up the Bhaktikalalayam Dance Academy. I am so thankful to have been given the opportunity to learn and grow in Bhakti Kalalayam under the guidance of Anapayini. Through Bharatanatyam, I, as well as so many others are given the chance to express their love and develop Bhakti, while helping others to come in contact with spirituality, ISKCON, and culture.” Prtha Dasi 17yrs

“Lately I have been thinking about what is the most important thing in my life, what i couldn’t live with out. I’ve recently discovered, though i have always known inadvertently, that that thing for me is dance.I feel like it is my telephone to reach Krsna.It feels so tangible and real.Through dancing not only can I present myself in prayer, but i can invite others to learn about Krsna’s qualities. This may sound stuck-up but i really see it as a privilege that anyone can take up” Komala Kumari Dasi 17yrs.

Although I had a dance graduation, it was merely a beginning to a life of dance. I return to India to continue my study, attend performances and to give performances myself. In the USA I have been performing at Festival of India Rathayatras since 1996. Madhuha Prabhu, The Festival Director, has been an incredible encouragement over the years. Madhuha says of our performances, “When Anapayini appears on the stage with her students acting out and performing the pastimes of Lord Sri Krishna, and so many different pastimes from the Srimad Bhagavatam, the impact is tremendous. These young devotees are not just highly skilled at Bharatanatyam, but they are fully Krishna consciousness devotees, using their Krishna-given talents to present Krishna consciousness to the general public. To me, having second generation devotees performing on our stage at the Festivals of India is the purest presentation we can possible give the general public.” Srila Prabhupada had very high expectations for dramatic performances and saw them as a means to communicate the philosophy of Krishna consciousness to people throughout the world. He considered drama one of the main methods to achieve what he termed a “cultural conquest.”

We are dedicated and determined to continue our service to Srila Prabhupada and his worldwide mission. If there is anyone who would like to be involved in anyway please contact me we need your assistance. These performances transcend all local considerations and they have universal appeal. By your help these dancing soldiers for Srila Prabhupada’s cultural conquest will be sufficiently armed with paraphernalia to continue their service pleasurably and successfully.

Yours in the dancing service of Shri Krishna, 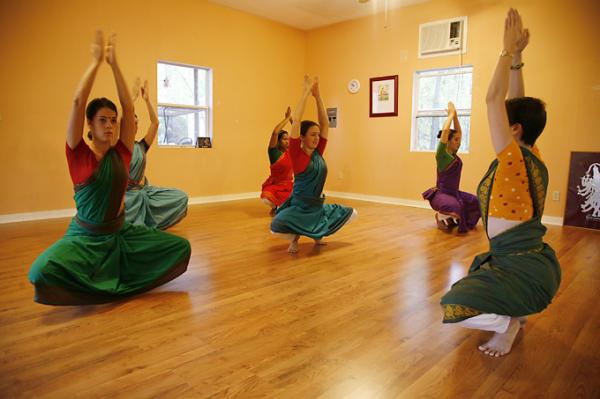 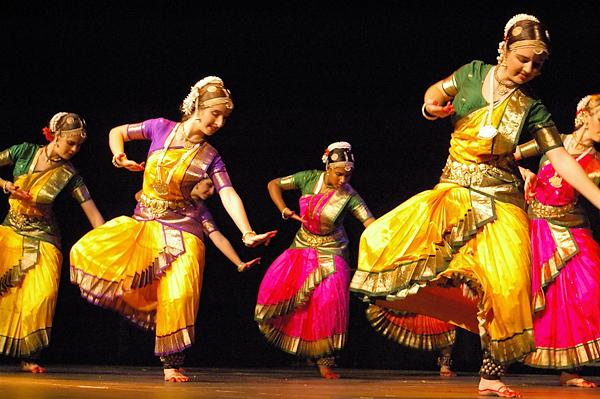