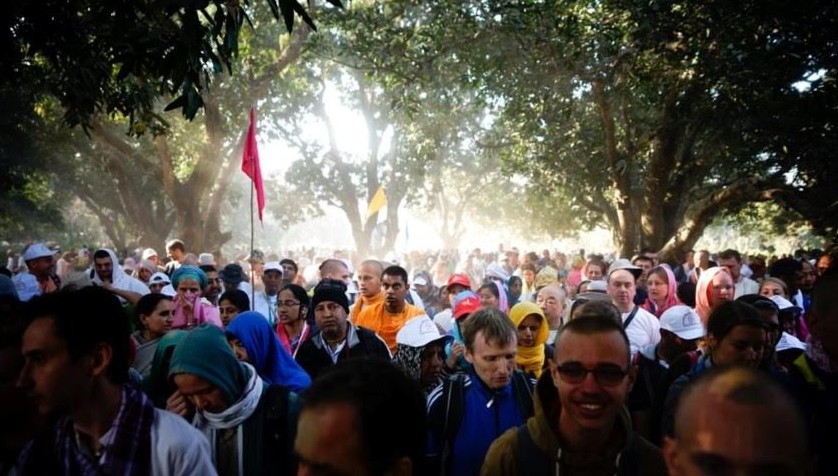 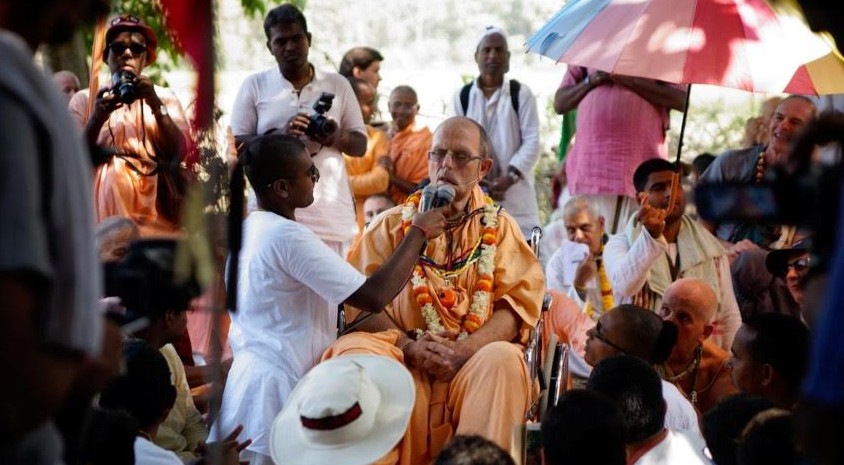 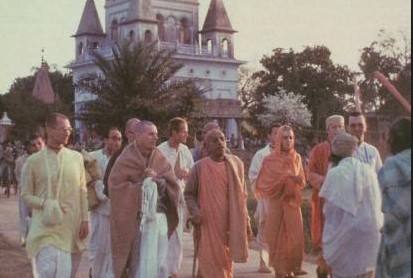 “Parikrama is a revival of Sri Caitanya Mahaprabhu’s pastimes.”

In 1972, Srila Prabhupada and some of his disciples went on parikrama around Sri Navadvipa Dham, and since that time ISKCON Mayapur has been performing Navadvipa parikrama. The ISKCON Navadvipa Mandala Parikrama has been steadily increasing in size – from seventy devotees to ten thousand devotees and beyond – and is continuing to grow, not only in size but in activities, destinations and transcendental bliss.

In 1996, the year of Srila Prabhupada’s centennial, the ISKCON Mayapur Navadvipa Mandala Parikrama was divided for the first time into two groups – Gauranga and Nityananda – which comprised of the English and Russian speaking devotees, and the Bengali and Hindi speaking devotees respectively. To facilitate the growing numbers of participants, the parikrama is now divided into six groups, allowing for smoother coordination and facilitation.

Each group has a supervisor and staff who assist in coordinating the participants, classes, kirtans, prasadam distribution, deity worship, as well as the participants’ sadhana by organizing a full morning and evening program.

The parikrama day begins with mangala arati, Nrsimhadeva puja, announcements and Tulasi arati. The devotees then get ready and prepare for the blissful day ahead. As the parikrama moves from one place to another, enthusiastic devotees lead kirtan and engage all of the parikrama participants, as well as the local Bengali onlookers who the parikrama party passes by. Once the parikrama arrives at its destination, the devotees absorb themselves in the nectar that flows from the mouths of the various senior devotees who speak on the transcendental pastimes of the Lord. Sometimes, the devotees perform dramatic narrations and dramas of various pastimes, at the very locations where the pastimes took place, for the pleasure of the Lord and His devotees. This brings the pastimes to life and leaves the devotees with a deeper appreciation of the dham.

Nectar flows all throughout the day with hours of katha, kirtan and wonderful sadhu sanga. But the nectar does not stop there. In the evening at the campsites, the devotees gather for an evening program that begins with Sandhya arati and kirtan. Thereafter, the devotees listen to more katha and engage in a question and answers session. After an enlivening evening, the devotees are served a light dinner and hot milk, and retire for the night, dreaming of the day’s events and the pastimes of Sri Caitanya Mahaprabhu.

The first parikrama organized by ISKCON Mayapur took place in 1974, under the guidance of His Holiness Jayapataka Swami. The parikrama would take place over a period of seven days, and the devotees would go early in the morning and come back to Mayapur every evening by bus. From the year 1990, with the assistance of His Holiness Lokanath Swami, the parikramas began to stay the night in different camp sites which were constructed for the devotees to stay in. Different facilities such as pandals for sleeping at night and for prasadam, bathrooms for the Prabhus and Matajis, and transportation of prasadam to the meal locations were made to facilitate the devotees on their pilgrimage.

Over the last three years, the Navadvipa Mandala Parikrama organisation built three new campsites, and they are planning on building permanent facilities in different places to better facilitate the parikramas in the years to come. Some of the permanent facilities they hope to build are sleeping facilities, bathrooms, kitchens, office spaces, traversable roads and proper housing facilities for the senior devotees. The Navadvipa Mandala Parikrama has obtained the use of six pieces of land all throughout the nine islands, and hopes to acquire the use of more land.

Sri Navadvipa dhama is a place where everything is all auspicious. Even sleeping in the dham is considered to be the same as doing dandavats. In the dham, every step is a dance, every word is a song, and everywhere one may look, there are kalpa vriksa wish fulfilling trees and cintamani touchstones. The Lord appeared in this very place and performed numerous wonderful pastimes; the dust raised from the ecstatic dancing of Lord Gauracandra still hasn’t settled, and if one absorbs oneself in the names, qualities and pastimes of the Lord, they will feel that ecstatic bliss. By participating in Sri Navadvipa Mandala Parikrama, the devotees are able to honour and visit the pastime places of the Lord, and thus become absorbed in meditation on and worship of the Lord’s holy dham. Everyone who has attended the parikrama has experienced this bliss in one way or another, and they can testify to it. It is a feeling that compares to no other than itself.

Bhakti Caitanya Swami once said that “…we worship Lord Caitanya through Sankirtan, we worship Jagannath through Ratha Yatra and we worship the Dhama, Sri Navadvipa Dhama…through Parikrama.”

Enough Salt- Now A Dash Of Pepper With Krishna’s Bhagavad-gita
Rukmini Mataji on Attentive Hearing Is The Goal of Sadhaka at...

Salvation from the Material World

How to really be happy this Christmas