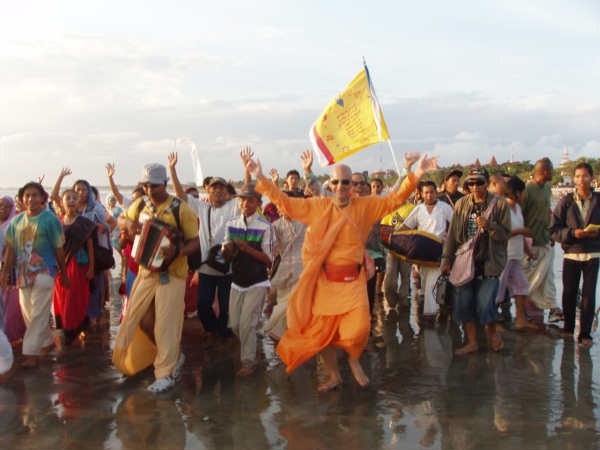 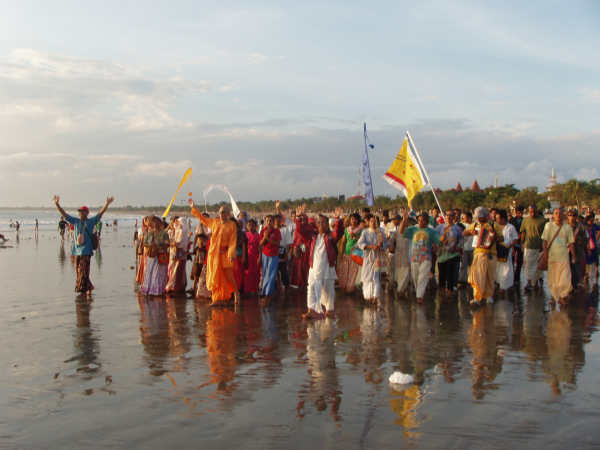 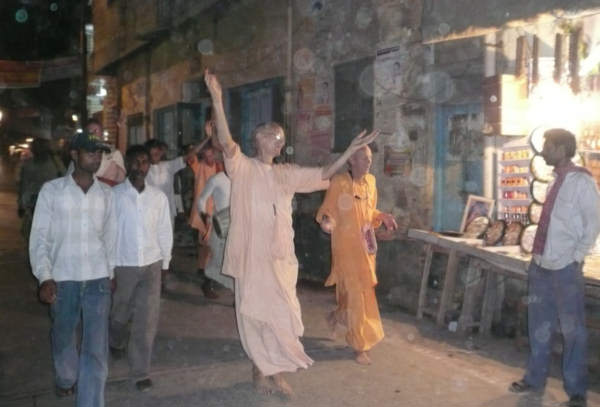 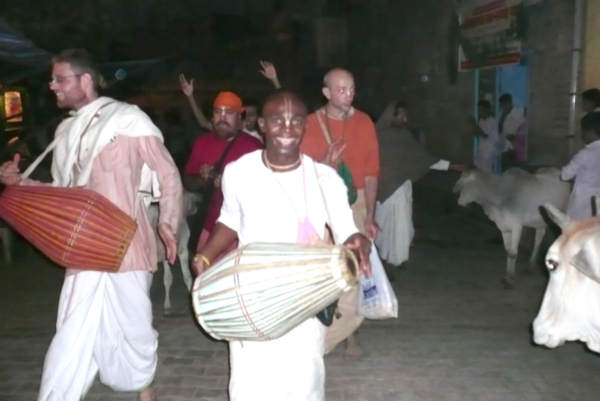 Long ago Praghosa Prabhu asked me to write something about Harinam sankirtan. I could not think of just w=hat to write without just quoting the thousands of slokas glorifying the Holy Name. Recently a I found a few things that I thought worth sharing. First is the following letter that Srila Prabhupada wrote on May 17, 1969. I had never seen this one and it is just what I wanted. We have to thank HG Madan Mohan from Moscow for posting this.

“My advice to you under the circumstances is that at least for one hour you must all go to have Sankirtana outside on the streets or in the park. That is your life and soul, first business. The next business is completing the chanting of 16 rounds every day. The next business is your editing, and if you find extra time, then you can attend the temple ceremonies. Otherwise you can stop these activities, but outdoor kirtana, your editing work and chanting of 16 rounds must be done. Outdoor kirtana must be done, even at the cost of suspending all editorial work. That is your first and foremost business. Temple worship is not so important. If need be, the whole temple can be locked, but the outdoor kirtana cannot be stopped.”

Then the following somehow came to me on he internet from ne of the blissful blogs of HG Kripamoya, He is a formidable harinam leader, although in poor health. http://deshika.wordpress.com/

“Methodism also led to the Salvation Army. When Srila Bhaktivinode Thakura heard about them and their outdoor singing of hymns to God, he said that it was the first manifestation of the sankirtan movement in the western world.”

Some time ago I read about hte life of St. Francis of Assis, whm Srila Prabhupada said was self realized. He would go caroling, sign spiritual songs in the streets.
He said that caroling was the religious activity for this age.”religion of this age”

1965 was an auspicious year for the earth, since that is the year that His Divine Grace A C Bhaktivedanta Swami Prabhupada arrived in what used to be called the land of the free and home of the brave. Now everyone is fearful.
Srila Prabhupada came to establish a world wide sankirtana movement. No one would have suspected that within a few years devotees would be dancing and chanting on all the main streets of the world.

The time was right. Young people were wondering where their lives were leading to.
Some of the top hit songs were:
#! I CAN’T GET NO SATISFACTION
HELP
EVE OF DESTRUCTION
TIRED OF WAITING

And the blissful dancing sankirtan parties were predicted b a number one hit from mid 1964.

Callin’ out around the world
Are you ready for a brand new beat?
Summer’s here and the time is right
For dancin’ in the streets
They’re dancin’ in Chicago
Down in New Orleans
Up in New York City

All we need is music, sweet music
There’ll be music everywhere
There’ll be swingin’, swayin’ and records playin’
And dancin’ in the streets

Oh, it doesn’t matter what you wear
Just as long as you are there

The song has since been covered by the likes Mick Jagger and David Bowie, The Grateful Dead and Van Halen.

It is a natural propensity of the soul to sing an dance with others. Hare nama sankirtan provides the perfect venue to do that in a spiritually pure atmosphere.
One book, DANCING IN THE STREETS, published in 2007, states:

“According to Dancing in the Streets, we are the only animals who come together to make music and then move in harmony with it. Most of us understand this pleasure. We even wish to dance ecstatically in large groups. In fact, we seem to like this most of all. What’s more, argues Barbara Ehrenreich, the urge to do so is innate: In one form or another, the practice seems to occur worldwide and in most if not all cultures, including those of the Paleolithic peoples who depicted their dances in caves. Typically, such dancing involves music or drumming”

Humans are trying to act in the natural condition,
The topmost planet of Goloka dham is described in BRAHMA SAMHITA

” every word is a song, every gait is a dance,”

“In this Age of Kali, the holy name of the Lord, the Hare Krsna maha-mantra, is the incarnation of Lord Krsna. Simply by chanting the holy name, one associates with the Lord directly. Anyone who does this is certainly delivered.

“The use of the word ‘kevala’ [‘only’] prohibits all other processes, such as the cultivation of knowledge, practice of mystic yoga, or performance of austerities and fruitive activities.
PURPORT
Our Krsna consciousness movement stresses the chanting of the Hare Krsna mantra only, whereas those who do not know the secret of success for this Age of Kali unnecessarily indulge in the cultivation of knowledge, the practice of mystic yoga or the performance of fruitive activities or useless austerities. They are simply wasting their time and misleading their followers. When we point this out very plainly to an audience, members of opposing groups become angry at us. But according to the injunctions of the sastras, we cannot make compromises with these so-called jnanis, yogis, karmis and tapasvis. When they say they are as good as we are, we must say that only we are good and that they are not good. This is not our obstinacy; it is the injunction of the sastras. We must not deviate from the injunctions of the sastras. This is confirmed in the next verse of the Caitanya-caritamrta.
Adi 17.25

martha and the vandellas, Mick Jagger and Davd Bowie, Myra, Van Halen, atomic kitten,grateful dead
And Mick Jagger shuld have shouted– It’s only HARINAM, but I LIKE IT> BUTI LIKE IT>

Deity clothes for sale
Attention book distributors to be!

3 Responses to “Harer Nama Eva Kevalam (Dancing in the streets)”