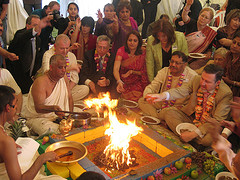 The holy ceremony of Bhumi Puja (ground-breaking) ceremony of the first ever state-funded Vaishnava-Hindu School in Britain took place on Saturday 7th June 2008 and marked the start of building works to be completed in August 2009 . The Krishna Avanti Primary School is situated in the London Borough of Harrow , this region of London has one of the highest concentration of Hindus. The event is organised by the I-Foundation who successfully bid for the school and the newly appointed governors.

Bhumi Puja is the taking of permission of Mother Earth before the commencement of works to build the school. It included the chanting of 10,000 year old Sanskrit prayers, ancient costumes and devotional singing to the accompaniment of Indian drums and cymbals. It culminated in a holy Hindu ritual called Yajna, where robed priests, assisted by children, poured sanctified offerings of clarified butter into a large sacred fire. Politicians, VIPs and project donors were lead to the excavation and construction site where those present took part in the ceremony.

The Krishna-Avanti Primary School is the result of years of careful planning and discussion with the local authority and government. It will be UK’s first Vaishnava Hindu faith-based Voluntary Aided state school (and as such will not charge fees). The School will be established as a one-form of entry, mixed primary school with attached nursery and will open in September 2008 with a Reception class.

Christine Gilbert, Her Majesty’s Chief Inspector of Ofsted was chief guest of the Bhumi Puja. ?I look forward to the Krishna Avanti School to be a centre of excellence and to be a very positive contribution to the Harrow community,? she said.

Praghosa das, the GBC for Britain, France and Ireland, was a keynote speaker of behalf of ISKCON, the faith partner of the school project. As well as expressing his support for the school as a whole, he also gave attention to the environmental initiatives of the design. ?The school is being hailed as one of the most environmentally friendly ever built, ? he explained, ?It will have solar panels to generate electricity and grass on the roof to keep heat in the building.?

“We recognise and take our duty seriously, in ensuring that we promote community cohesion, inclusion and value intercultural and religious diversity, ” said the Krishna Avanti School’s New Head Teacher Mrs Naina Parmar, “we will ensure our pupils are equipped with life long skills and attitudes essential to enable them to make not just positive but outstanding contributions to all aspects of contemporary British society.” 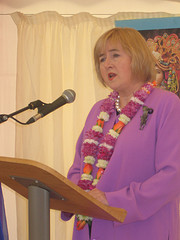 “Harrow is proud to have the first and only state-aided Hindu school in the country,? said Leader of Harrow Council, Cllr David Ashton. ?It is also highly appropriate for Harrow to have this honour because of our ethnic diversity, in particular, a large Hindu population. This is about giving people choice. We look forward to the school being a focus of both academic achievement and community inclusion. This is history in the making.”

One-volume Srimad Bhagavatam
Food For All wins an Award