Letters of Yamaraj, the God of Death 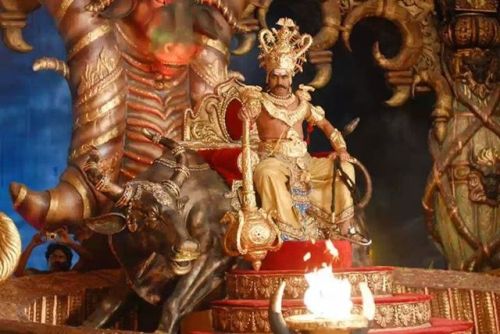 Letters of Yamaraj, the God of Death.
Dhirasanta Das Goswami: In a small town situated close to the banks of the River Yamuna there lived a man called Amrita. Nothing in life caused him more anxiety than his fear of death. One day he had an idea that if he befriended Lord Yamaraj, he would be able to keep death at a distance, and so Amrita practiced austerities and meditated upon the Lord of Death, who was verily pleased and granted him a vision.
Lord Yamaraj said, ‘I know by the aid of my divine powers that you seek to befriend me – your wish has come true. My presence is only available to those upon whose death my messengers or I take their souls to my domain. Those that are born must die and those who die will be born again, this is the eternal law. No one can escape death, yet I grant you my vision while you are still living.’
Amrita said, ‘As a token of friendship, I ask this one favor: if death is inevitable, then since I am to die, at least let me know beforehand when my end is due so that I will be able to make proper provisions for my family.’
Lord Yamaraj replied, ‘Yes, this is a simple matter, I promise to inform you beforehand, but as soon as you receive the message, you must set about making preparations.’ With these words, Lord Yamaraj vanished.
Many years passed by, and Amrita’s hair turned grey, he continued living happily with not a thought related to the fear of death. He enjoyed life’s sensual pleasures and delights. He did not receive any correspondence from Lord Yamaraj and was pleased that so far no letters had arrived. More years passed by, Amrita lost his teeth, but still lived without any concern for death since no warning letters had arrived from his friend. The years continued to roll by, Amrita’s eyesight became dim. Old age is catching up with me he thought, but I am thankful that my friend has still not sent any letter warning me of forthcoming death.
By now Amrita was an old man who could hardly stand up straight, he could not even walk without the support of a stick. One day he suffered a stroke and became paralyzed. His condition was critical, but Amrita was still in a happy state of mind. As long as his friend Lord Yamaraj did not send a letter, no thought of dying ever entered his mind.
Then the inevitable happened: Lord Yamaraj, the god of death, entered the room. Amrita was startled and his mind was seized with fear. Lord Yamaraj said, ‘My friend, come now, you have suffered greatly, I have come to take you with me.’
Amrita was trembling and said, ‘Alas, you have betrayed me, you did not keep your word, you failed to send any warning letter and now you come in your fearful form to take me away. Are you not ashamed to thus deceive a friend?’
Yamaraj replied, ‘Your desire for pleasure made you blind, how then could you not see the letters which I had sent to you? Not one, but four letters were sent – but you heeded them not.’
Amrita was puzzled, ‘Four letters? But not one reached me! They may have gone astray in the post.’
Lord Yamaraj said, ‘Despite your cleverness, you were foolish enough to believe I would take up a pen and write to you. O deluded mortal, time is my messenger who brought word to you. Years ago, your hair turned grey, that was my first letter of which you took no heed – instead you blackened your hair with dye. Your teeth began to fall out – my 2nd message. However, again you saw no warning, but instead got yourself a set of false teeth. My third letter was sent when your eyesight failed. The fourth when you became paralyzed.’
Amrita cried, ‘I have grievously erred, unforgivable is my error – yet once more I crave indulgence, Lord Yamaraj’
Lord Yama replied, ‘Indulgence! What more is there for me to give? What use did you make of the gift of human birth? Sensual pleasures and drunkenness – you wasted your life! Now you shamelessly ask for more time and for what? ’
Amrita said, ‘O Lord, remember our past friendship? Please recall those days and give me one more chance.’
Lord Yama said, ‘That friendship was of that time – now it’s done. I come as the dispenser of the law, a law which is above love and above hatred. This law is just, true and impartial. I carry out the stern dictates of destiny, all mortals have to bend to my final mandate – this is the divine law, Now let us go.’
Lord Yamaraj puts his noose over the dying man’s neck, the man begins to gasp and then chokes. People then say Amrita is dead.

Purifying potency of a place of pilgrimage
Bridging the Gap - Connecting the Older and Younger Generations
Tagged under: Nectar