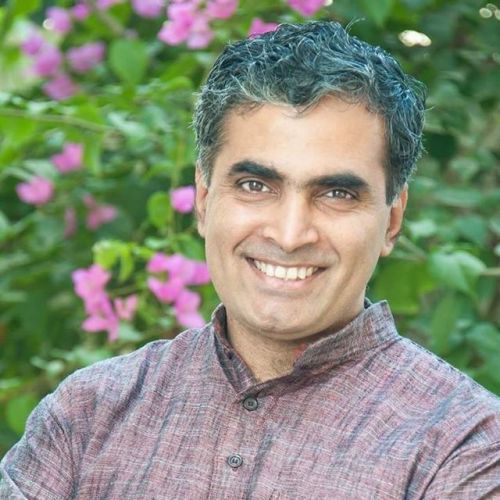 His Grace Shyam Vallabh Prabhu (Sanjay Pishrodi), Krishna’s devotee and respected Ayurvedic Doctor, left his body in a car accident.
His Grace Shyam Vallabh Prabhu was a doctor by profession, later on went to America and treated so many Srila Prabhupada’s disciples. Then came to Vrindavan.
So many Srila Prabhupada’s Disciples gave good report to HH Radhanath Swami, his Gurumaharaj. Being pleased, Maharaj called him personally to Govardhan Eco Village to take care of the health department. Radhanath Swami appointed him also as his personal doctor.
Recently I was visiting one of our old ashrama-mate in Kerala Sanjay Pishrodi (Shyamavallabha das). His story is interesting and worth sharing with you all.
He was born in a highly respected family in Kerala. His father supported his desire to become a doctor. He completed his MBBS from BJ medical college in Pune. While studying he came in touch with devotees, and eventually joined the ashrama at Chowpatty Mumbai. He stayed there for six years and then he moved out of the ashrama and got married to a devotee who was a doctor.
They pursued oncology in hospice care from London to work with Bhaktivedanta hospice in Vrindavana. Eventually being there for some time, he moved out to do something else. Meanwhile, he started developing some major interest in Ayurveda. He got an offer to work in one of the best hospitals in Mumbai, along with his wife in same department, with big package and all facility. It was a difficult offer to reject, and why should one? The Radha Gopinath temple was very close to the hospital. But there was a call, which was asking him to decline the offer to the dismay of the hospital and other relatives. He chose to study and practice Ayurveda much deeper and learn its science.
It was a struggle, but not of confusion or helplessness but rather a fulfilling one. Last few years, he has put his heart to learn deep Ayurvedic principle from some of the best teachers in Kerala, who have maintained the tradition of this science in disciple succession. He recently started his Ayurvedic center in Wayanad Kerala, with the assistance of his wonderful family, who eventually got convinced about his decision. The decision came after he healed his father: this is the story as our friend narrated:
“My father was diagnosed with an incurable disease with his legs swelling up and making it difficult for him to walk. When all the doctors gave up on him, he came to me and it was cured in 1 month. It has been 4 years since and there is no sign of recurrence. This was a turning point in his perspective and thus helping to open the center in Kerala.”
From being Oncologist to Ayurveda Vaidya, has been a journey with a lot of challenges, but it has been fulfilling one. He recently started writing books on Ayurveda science, based on Vaghabhatta’s “Ashtanga Hridaya,” The books series is of 30 volumes and is a lifetime project. It is being written especially with the intention of presenting authentic Ayurveda and protects it from the watered down versions being taught all over the world.
His good wife Subhadra-Priya devi dasi supported him in his endeavor, even though she cannot relate to Kerala so much since she is Gujarati lady, raised in Mumbai.
After some time he realized why did he go to Ayurveda? He remembered his grand father’s prophesy, who had told to his relatives, that his grandson (Sanjaya) will eventually take and protect the tradition of Ayurveda.
He used to spend all his summer vacations with his grandfather collecting herbs for him and observing him perform all the fire sacrifices etc. This was very inspiring for him.
Both his grandfathers were accomplished Ayurvedic vaidyas and his great-grandfather (mother’s grandfather) Pashupati Namboothiri was the closest friend of Valiya Narayanan Namboothiri of Vaidyamadhom (one of the most famous ashta vaidyas) – both greatest vaidyas of their time.
He is protecting his kula dharma, but now with the touch of special flavor- Sri Krishna and the teachings of the paramapara.