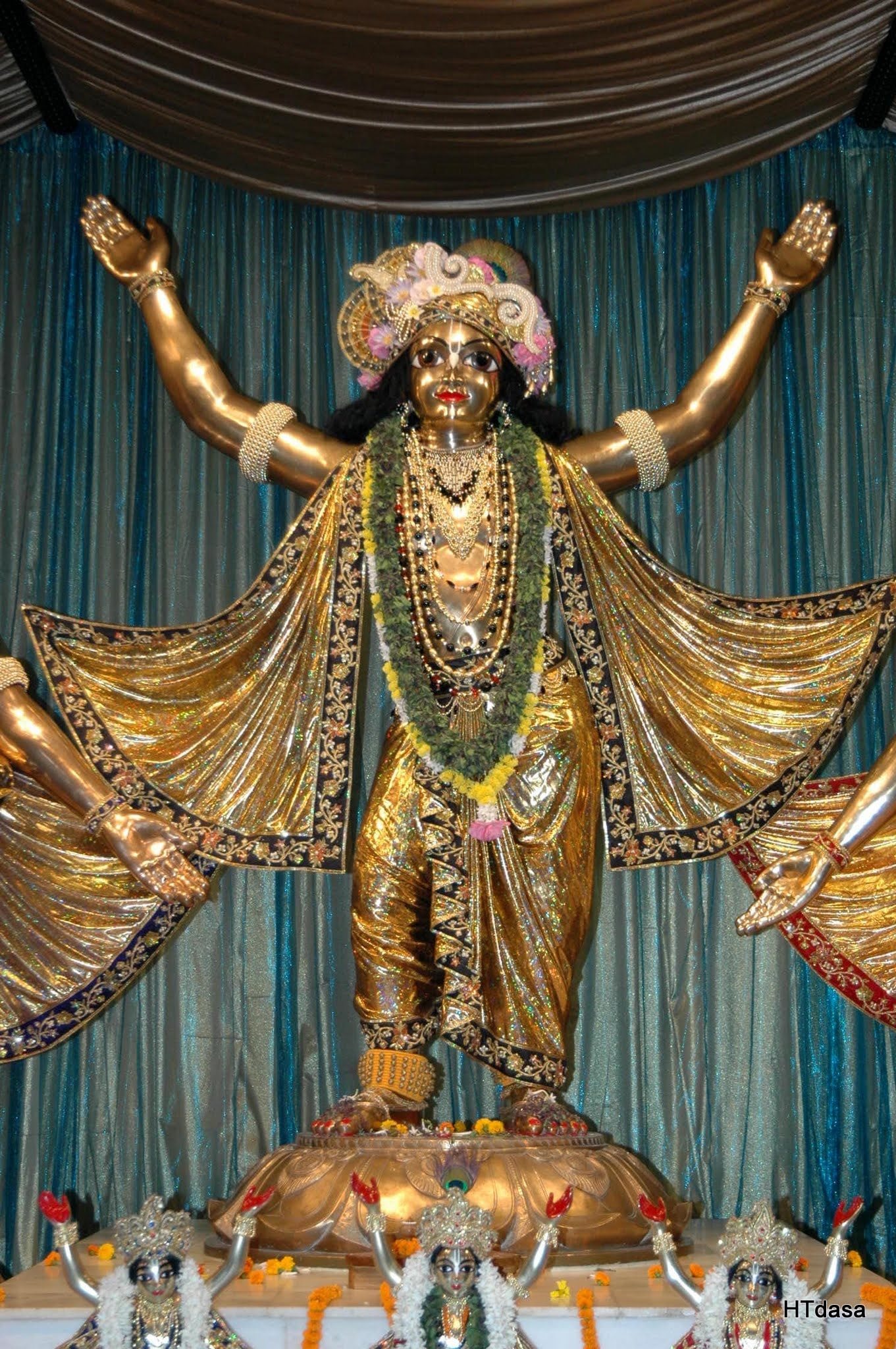 <!–This year, Sri Ganga Puja falls on June 12. Instead of reposting the glories of her appearance, one can refer to last year’s link for more information. The following is one of many sweet narrations from the Sri Caitanya-mangala, Adi-khanda 5 (translated by Subhag Swami<!– and published by Mahanidhi Swami, 1994). It describes the intimate relationship between Sri Ganga-devi and Lord Caitanya.

“Now everyone, please listen to another day of the Lord’s pastimes. During the enchanting evening atmosphere, Visvambhara and His friends went to have darsana of the River Ganga. On both sides of the river many brahmanas and saintly persons offered respects and prayers to Ganga-devi. Ladies carried pots of Ganga water. Many different panditas, with names like Misra, Acarya, and Bhatta, stood by admiring the pure and beautiful River Ganga. Both the young and old were worshiping the Ganga with fruits, flowers and sandalwood pulp.

“Due to uncontrolled love for Visvambhara, the Ganga rushed rapidly, spilling over her banks in order to gently touch the body of the Lord. People wondered why the Ganga seemed much more beautiful today. Although she is usually calm and quiet, why was she now loudly roaring and surging with waves? There was no storm brewing, yet why was she flooding her banks?
“Standing on her bank was one brahmana who was most devoted to her. By the mercy of Ganga-devi, his heart was pure, so he could see the past, present and future. Seeing the Ganga swirling in ecstasy, he got excited and wondered why this was happening.

“Visvambhara stood on the banks of the Ganga and gazed at her with love and devotion. Due to horripilation, His body expanded in size, and His reddish eyes filled with tears of compassion. The brahmanas understood that He was the Supreme Personality of Godhead.

“They could see that Visvambhara was overcome with love for Ganga-devi. Knowing Ganga’s heart, the Lord walked forward to touch her. Ganga’s desire was not fulfilled, so she splashed her waves across the lotus feet of the Lord. In extreme ecstasy, Gauranga chanted ‘Haribol Haribol!’ and then offered His lap to His favorite one. Out of love, Gauranga keeps Ganga-devi in His heart. In the shape of hundreds of streams, Ganga’s tears of love flowed toward the ocean. Her pure waters flowed from each hair on Gauranga’s body, but the people call it perspiration. In this way the ocean of love overflows.

“In all directions, the people were blissfully chanting ‘Hari Hari!’ The whole town of Nadia became astounded to witness this pastime. They became convinced that Visvambhara was the Supreme Personality of Godhead. The brahmana devotee who had watched Visvambhara’s pastime with Ganga-devi fell at the Lord’s feet.

“Crying, the brahmana said, ‘Finally after a long time, the Ganga has bestowed her mercy upon me. Ganga-devi allowed me to realize the true identity of Mahaprabhu, who is beyond the reach of the greatest yogis and sages.’ Overwhelmed with love, the brahmana cried and rolled on the ground. On seeing him absorbed in love, Lord Gauranga returned home.

“Then the brahmana explained why the River Ganga overflowed her banks that day. He said, ‘Once upon a time Lord Siva was ecstatically singing the glories of Lord Krsna. Narada Muni and Ganesa accompanied him, playing vina and mrdanga respectively.

“ ‘Due to spiritual euphoria, their bodies erupted in goose bumps from head to toe. The harmonious spiritual vibration of their concert pierced the coverings of the universe. Being attracted, the Lord went to see them.

“ ‘The Lord said: O Mahesa (Siva), don’t sing My glories in this way. You don’t realize its effect. Your music and singing causes My body to melt.

“ ‘Smiling, Mahesa said: Let me see the mystical effect of my song. Then Lord Siva sang even more vigorously, filling up the universe with his song. Suddenly, the Lord’s body gradually melted even more. Seeing this, Mahesa became terrified. He stopped singing and the Lord stopped melting.’

“The water which came from the melting of the Lord’s body was actually liquid Brahman, and it was full of compassion. Everyone says that this water, which is the embodiment of Janardana, is a place of pilgrimage. Lord Brahma preserved this precious water, the rarest thing in the material world, in his kamandalu (water pot). ‘To favor His devotee, Bali Maharaja, the Lord again manifested Himself. Appearing before King Bali in His dwarf form of Vamanadeva, the Lord begged three steps of land. Vamanadeva’s first step covered the earth planet. His second step crossed the universe. The final step He put on Bali’s head.

“ ‘Just listen to the unlimited glories of Tripada (Vamanadeva) whose mercy blessed the three worlds. The water flowing from the nails of the Lord’s lotus feet inundated the universe. Lord Brahma lovingly worshiped the Lord’s feet. He honored that water by pouring it over his head. People call the Ganga: Tripada Sambhava seeing that she came from the lotus feet of Tripada, Lord Vamanadeva. Now that same wonderful Lord has appeared before us as Mahaprabhu Visvambhara. Let us relish His darsana. Since Ganga-devi expressed her feelings to me, I could explain this.’

“On seeing Mahaprabhu, Ganga-devi remembered this pastime, and out of love, overflowed her banks. As Visvambhara lovingly gazed at her, Ganga-devi saw that the Lord’s body was sweeter than nectar. Then on the pretext of making waves, she tenderly caressed the Lord’s lotus feet.

“Everyone rejoiced over hearing this beautiful story. Thus Locana Dasa happily sings the glories of Gauranga.”

Why is God not humble?

Natural Disasters: Where is God in All of This?

Hatha Yoga and the Bhagavad-gita