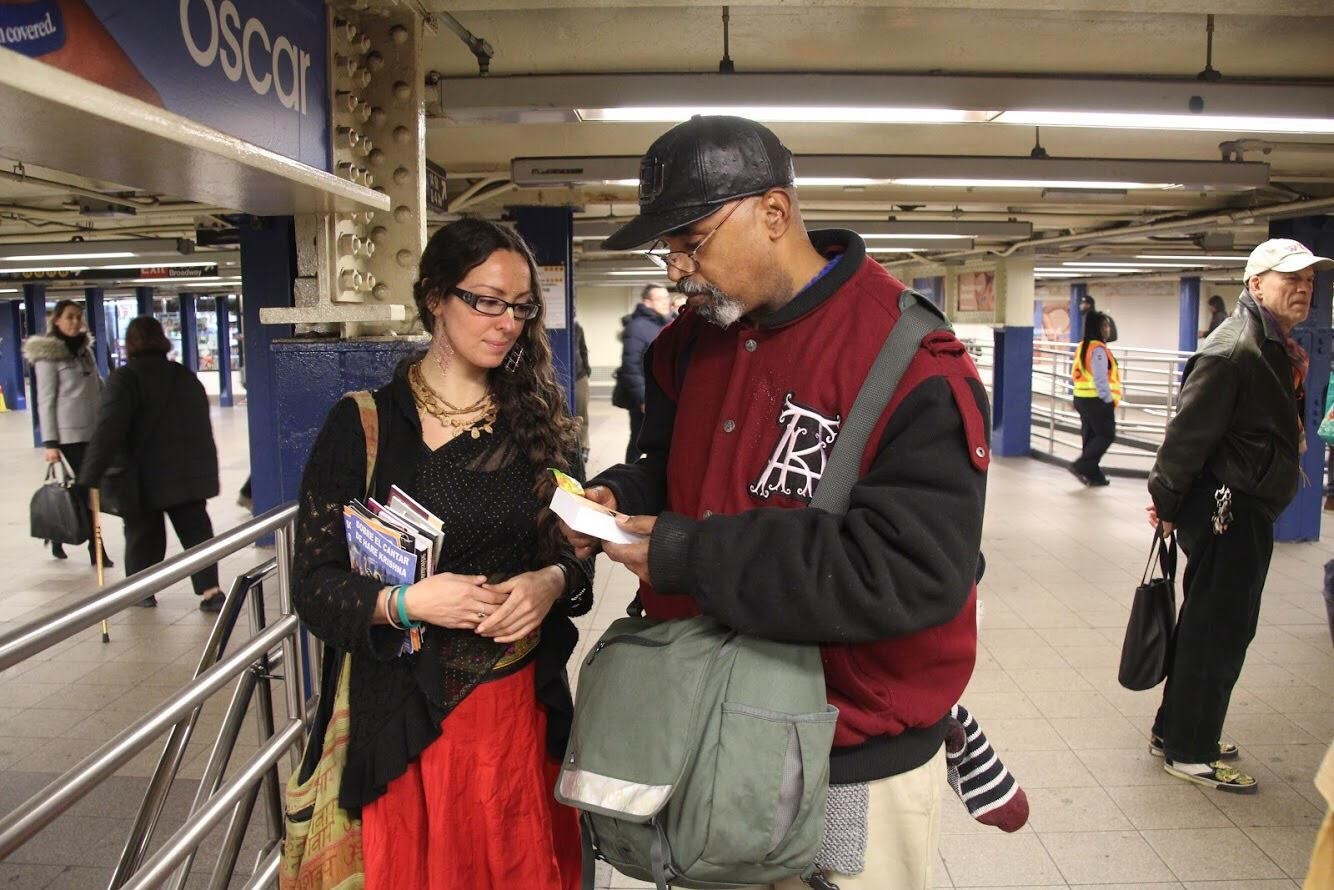 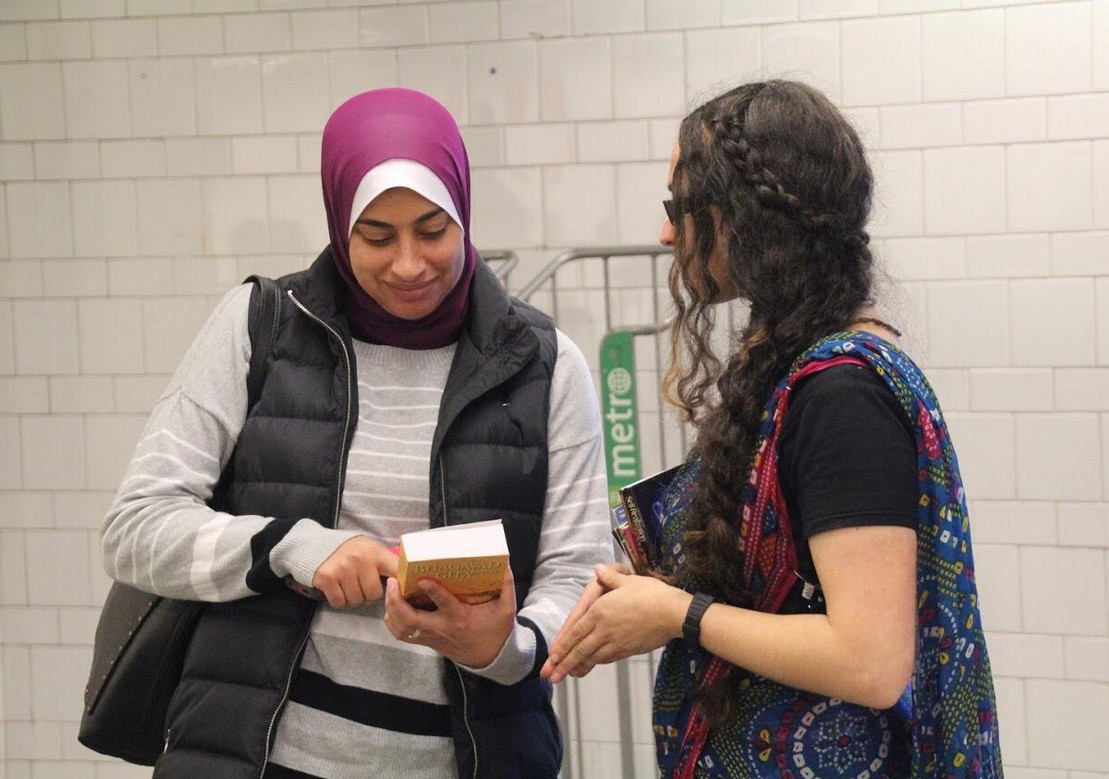 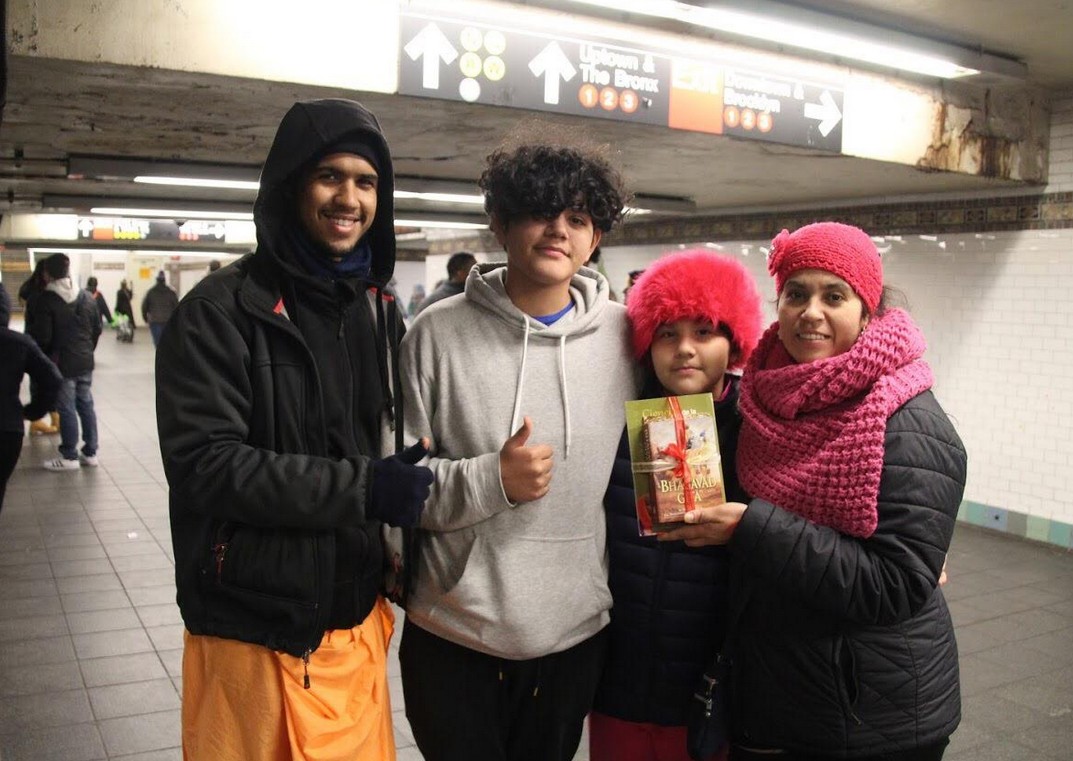 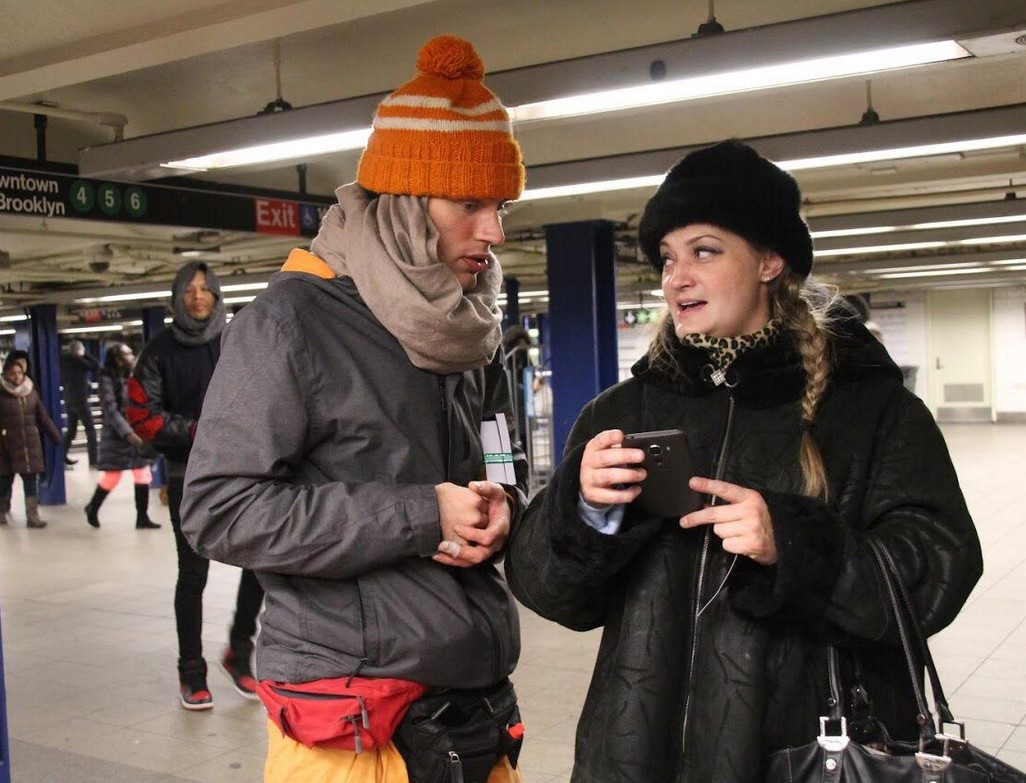 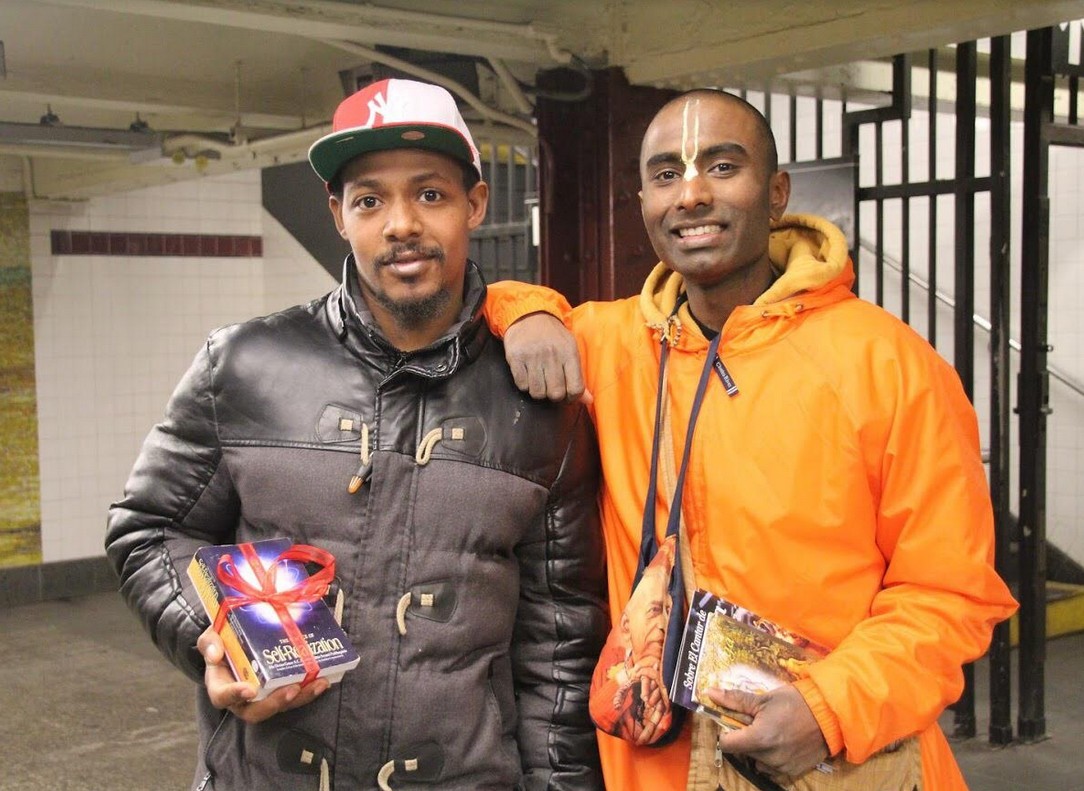 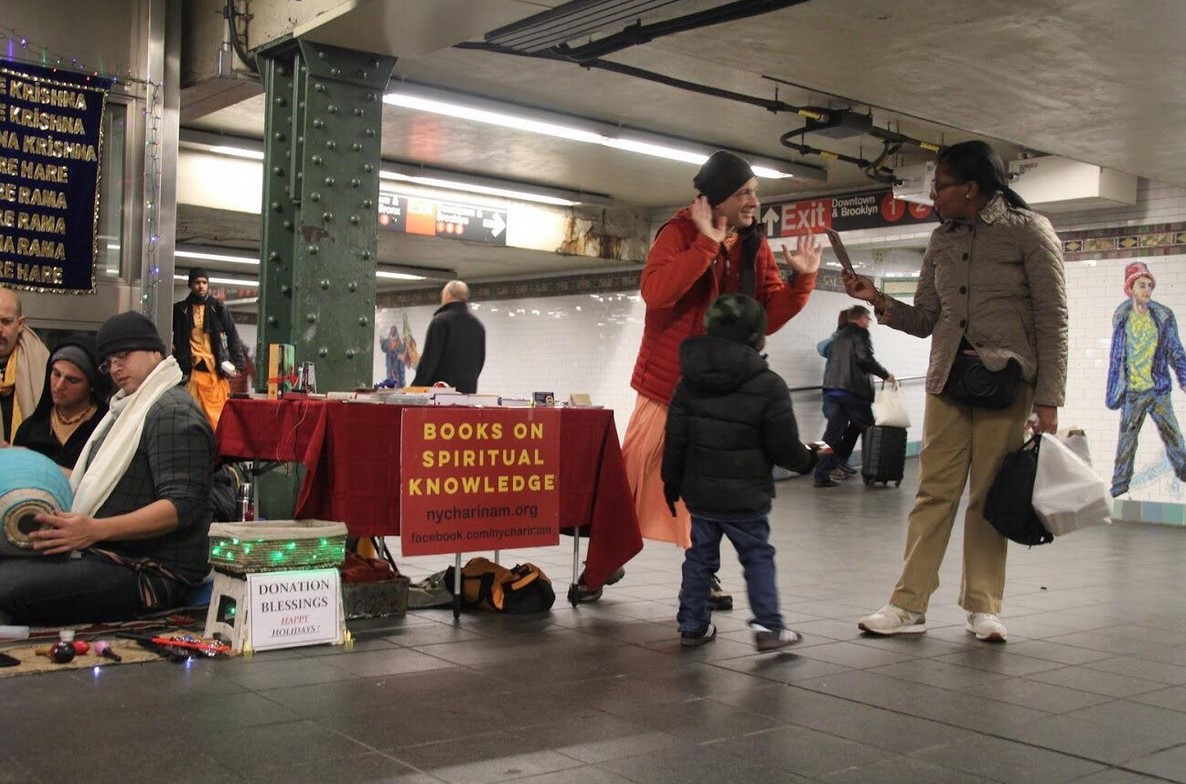 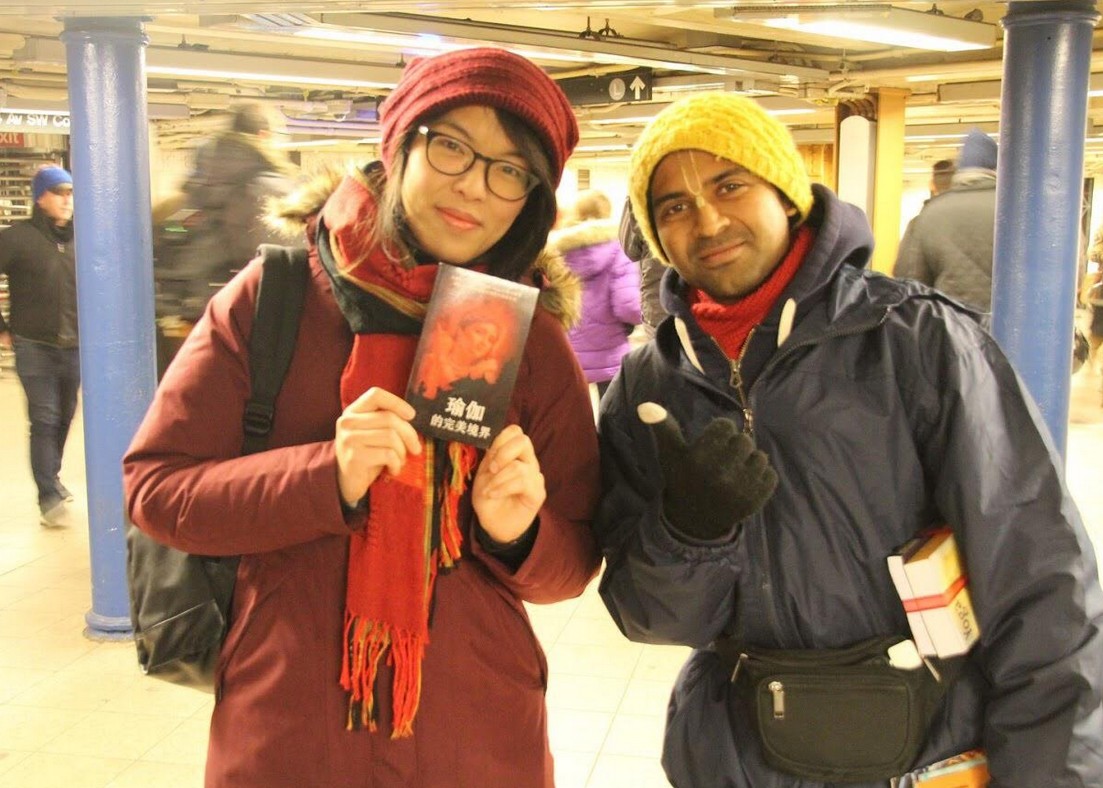 On behalf of BBT Marketing, Communications and Innovations Department

We in ISKCON may feel that times have changed; that we must use very different methods to deliver our message to people. But in New York City’s Harinama Ashrama, a group of devotees is using the most “old school” approach – simple Harinama and book distribution for hours every day – to impressive effect. And nowhere was this more evident than during the Prabhupada marathon this past Christmas.

Rama Raya Das, formerly of the 24-Hour Kirtan Mandali in Vrindavana, India, started Harinama Ashrama on the instruction of his late friend and guide, Aindra Das. Aindra had said, “If you just sit on the streets of New York and do sankirtana, you’ll see where your realization will be.”

So on March 25th, 2012, Rama Raya began chanting in Union Square Park, with a display of Srila Prabhupada’s books in front of him. Every day, rain or shine, he continued. Sometimes devotees joined him; sometimes they didn’t; but still he went on. The first winter was tough. Temperatures plummeted, and Rama Raya found shelter in the subway. Sometimes, he would chant for four hours straight on his own. But he would not stop.

“I was a student of computer science at NYU,” recalls Mahotsaha Das, December 2017’s number 4 book distributor in the U.S. “I was walking down the street, and I heard Rama Raya Prabhu chant. Just hearing him chant made me want to dedicate my life to him.”

Another devotee, Gopal Champu, was only 21 years old when he first bought a Bhagavad-gita As It Is on E-bay and then discovered Rama Raya’s Harinama. “My first Harinama was a profound experience,” he says. “I ended up coming back every week for nine months, until finally I just decided to leave my job as a car salesman and join full-time as a brahmachari in the ashram.”

Today, twelve brahmacharis in their early to mid-twenties live in Harinama Ashrama, a tiny 900-square-foot apartment in Manhattan, and go out on Harinama and book distribution for six hours every day. Two full-time ladies live in a small women’s ashram in Queens. Their staple diet is simple kichari – sometimes for both breakfast and lunch. But they love it.

“You can imagine the inspiration that goes behind us cramming in together in such a small place,” says Visnu Citta Das, who recently moved from India to join the Ashrama. “It’s austere, but it’s bliss.”

This inspiration and determination to persevere through austerity has gradually made Harinama Ashrama one to watch during the Prabhupada Marathon.

For two marathons, Mahotsaha was on his own. Last year, Gopal Champu joined him, and they distributed 3,300 small books. But this year was the breakthrough.

“We realized how important goal setting is,” says Gopal. “After we set a goal, it was like a magical energy just propelling us.”

Gopal and Mahotsaha were joined by Visnu Citta Das, Bhaktin Kate and Bhaktin Diana, with others devotees helping them when they could. Throughout the year this small group distributed 34,454 books, remitting $38,929 to the BBT. During the marathon, they smashed their goal of 6,000 books, distributing 6,650 in total. Not only that, but the World Sankirtana Newsletter confirmed that this was the most successful Prabhupada marathon in New York City since 1989.

With the Big Apple suffering one of the coldest winters on record, the devotees made the subway their base for most of the marathon, which ran from December 1st to January 1st.

“Our setup was simple,” says Gopal Champu. “We laid out two mats on the ground, with a cloth maha-mantra sign behind us, and another wooden one in front of us. Then we had a small book table with a sign reading, ‘books on spiritual knowledge.’ Some devotees chanted the Holy Name, while others distributed books on the perimeter of the Harinama.”

Because New Yorkers are constantly bombarded with solicitors of all kinds, the team had to catch their attention. The Harinama was the first method. The second, which boosted book distribution dramatically, was to present the books not on their own but as a set wrapped up in colorful ribbons, like a gift pack. This way, they appeared more attractive and also went out three or more at a time to each person.

Another method was to use attention-grabbing lines. Mahotsaha excelled at this, calling out to people, “You got one of these? Check it out!” before launching into a full rap: “It’s the King of knowledge / You don’t get in college. / It’s cool although it’s old school / Helps you distinguish reality from illusion / Keeps you outta delusion. / I’m a monk not a punk! / I ain’t sellin’ the book, but take the book, and help a brother out with a donation!”

Many people connected with the devotees and the knowledge they were presenting. In some cases, the book distributors realized that by preaching in New York, they were also sending Prabhupada’s books to far-flung corners of the world – people from both Mongolia and Israel, to name just two countries, took books to bring home and share with their friends, thus planting a seed.

In other cases, devotees met people who had encountered the Hare Krishna Movement in the early years in New York City, and were interested, but for whatever reason did not take the next step. One man used to attend Prabhupada’s lectures at 26 2nd Avenue in 1966, and remembered, “It was a really poor movement back then, but the Swami was always there, and the Swami was happy.” Because his girlfriend was uninterested, the man fell away. But now, over fifty years later, he took a book and an invitation to a program.

“After lots of experiences like that, I have a strong conviction that if people come in touch with Srila Prabhupada’s movement, they can’t escape Prabhupada’s mercy, no matter how much they try,” says Mahotsaha.

For the Harinama Ashrama devotees, their success in the marathon was due to the inspiring and enlivening teamwork.

But most of all, it was due to serving a higher cause. “For me, what stuck out was that when we focus our mind and attention on trying to please our spiritual masters and Srila Prabhupada above everything, we get a kind of superhuman strength,” says Gopal. “There’s a sweetness and a bliss to that, a satisfaction that you don’t feel doing anything else.”

The marathon, of course, isn’t the end. The Harinama Ashrama team pass out invitations along with books, and consider the second half of book distribution to be cultivating people’s burgeoning spiritual lives.

Every Wednesday, people who receive books from devotees on the street or see a Harinama attend a mantra yoga outreach program at Matchless Gifts on 26 2nd Avenue, where Prabhupada began ISKCON. On average, there are now eight to ten guests a week, all Westerners. And they’re starting to chant japa, attend the morning program, and seriously practice Krishna consciousness. Some are now asking to join the Harinama Ashrama full time.

In addition, many devotees from around the world are beginning to come and spend three to six months at a time at Harinama Ashrama, inspired to try it out and then establish similar programs in their countries.

As a result, the Ashrama is looking to move to a bigger facility that can accommodate double or triple the number of brahmacharis.

“We have new bhaktas from our outreach – people who we have distributed books to,” says Visnu Citta. “Young men who are now inspired to give their life to the sankirtan movement. But we don’t have the facility to accommodate them, and nurture their spiritual growth.

“So our message for the readers of this article is – we are trying to fulfill Srila Prabhupada’s and Chaitanya Mahaprabhu’s desire, of a worldwide sankirtan revolution that will respiritualize the misdirected civilization. And we are requesting everyone out there who has sympathy for this cause, to please contribute financially. We also ask them to please visit us, explore our program, and try to establish it where you live.

“And that would be the actual success of NYC Harinama,” he concludes. “If we can be inspirational enough for the same thing to be replicated in different cities and towns of the world. And that way, we will all cooperate together and see Chaitanya Mahaprabhu’s prediction manifest before our very eyes.”

To sign up as a monthly donor, receive a monthly newsletter, and find out more information, please visit https://www.nycharinam.org/