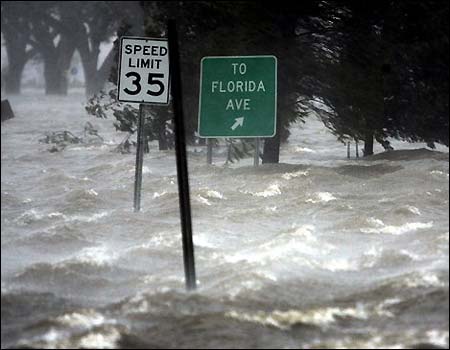 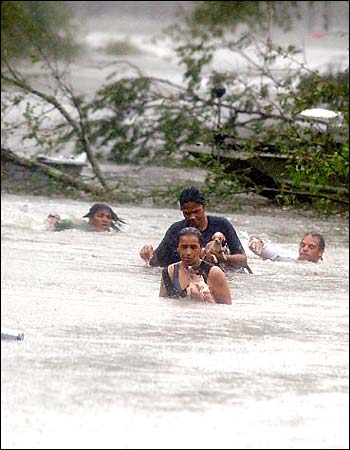 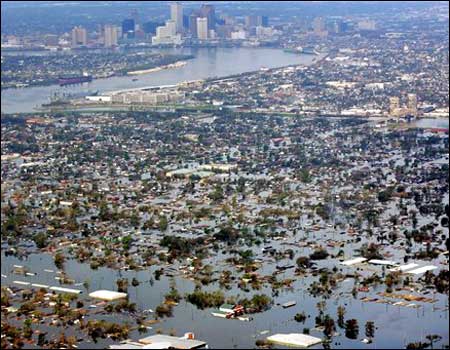 During my preaching tour in the United States, I was invited to visit New Talavan, an ISKCON rural community in Mississippi. My Godbrother Yogindra Vandana das picked me up at the airport in New Orleans. As we drove through the city I was impressed by the beauty of the old southern buildings, but soon I was shocked to see several neighborhoods still ramshackle and abandoned after being flooded by Hurricane Katrina two and a half years ago.

“Eighty percent of the city was under water,” Yogindra Vandana said. “The entire Mississippi coast was devastated. Reconstruction work has been going on steadily, but it takes time.”

“Almost two thousand people died, and 285 thousand homes were destroyed,” he continued. “More than a million acres of forested land was ruined. The total economic impact in the region exceeded 150 billion dollars. The US Department of Homeland Security described the hurricane as one of the worst natural catastrophes in the country’s history. It will take years, perhaps decades, to rebuild the city to its original glory.

“We were sitting on a time bomb because parts of the city are below sea level. There’s always a risk that the nearby Mississippi River may overflow and flood the city in an exceptionally large storm. During Hurricane Katrina the levies surrounding the city, which were built to prevent flooding, proved inadequate.”

“Just look over there,” he said, pointing to an abandoned shopping mall. I couldn’t believe my eyes. The huge mall was lifeless and eerily quiet in the middle of the day with not a soul in sight.

“Everything inside was swamped,” Yogindra Vandana said. “The water was 20 feet deep. There are a number of shopping malls like that around the city, completely abandoned.

“We still live in the wake of Katrina. It was big news in the media for several months, but eventually most of the public lost interest. The only positive result has been that people here are more receptive to Krsna consciousness than ever. Life is such that it often takes a tragedy to awaken people to its real goal.”

“True,” I said. “Thank God that New Talavan was spared the wrath of the storm.”

“Yes,” he said, “and many of our community members were involved in the relief work in a Krsna-conscious way.”

“The hurricane hit on a Monday morning,” he began. “We had just celebrated Janmastami and Srila Prabhupada’s Vyasa-puja over the weekend. Because severe hurricane warnings had been issued, a number of New Talavan families had left for Atlanta, Georgia. But not everyone had a place to relocate. Around seven families and fifteen single men and women remained.

“I was performing mangala-arati in the temple when the storm hit. The winds were so strong I thought the roof was going to come off. After arati all the devotees sat together. We could see debris flying around outside. Electrical lines were down showering sparks and the sound of the wind was overwhelming. It was frightening, but the devotees sat calmly chanting Hare Krsna.

“When the eye of the storm was overhead, it became quiet, and I ran outside to assess the damage. It was a scene of devastation. Debris was everywhere. Many of the trees on our property had been blown down. Much of our fencing was destroyed. Our cows were roaming around confused. I found several of them dead, killed by falling trees. Our workshop was completely destroyed. After waiting out the remainder of the storm we discovered that four devotees’ homes had excessive damage.

“What we didn’t realize immediately was the extent of the damage in the region. Much of New Orleans was under water for 30 days. Trees littered the roads in all directions. A number of electrical poles in the region were down and as a result cell phones, landlines, and computers didn’t work for weeks. For an entire month there were no commercial or retail stores open along the south coast. Schools were closed for a year and a half, and New Orleans Airport was not operational for six months.

“Our first order of business was to clear the roads on our property with chainsaws and try to mend enough fences to keep our cows contained. We spent a lot of time re-roofing some of the buildings.

“Despite the desperate situation we were better off than many of our neighbors because we had two essential things: a generator that enabled us to pump clean water and liquid propane gas for cooking. Our neighbors didn’t have clean water because many of the pipes delivering public water had broken, and the supplies were contaminated. And most people had no means to cook because they couldn’t get into town to buy propane.

“But our greatest asset was that we had a satellite dish to communicate with the outside world. We immediately informed devotees in various temples that we were okay, that no one was injured, and we had basic supplies and facilities for survival.

“Then for days we sat back and waited. Because there were so many trees on the roads, we couldn’t go outside the community and no one could come in. It took a massive effort on the part of the Mississippi authorities just to clear the roads.

“The positive side was that we were obliged to live a very simple life. In particular, because there was no electricity we went to bed when the sun set and had mangala-arati every morning by candlelight. Because of our Krsna-conscious training we were prepared for such adjustments. But you can imagine how difficult it was for others. Sanitation was a real problem. People were forced to evacuate into plastic bags in their homes and bury the bags in their gardens.

“After several days we received news that some of the roads had been cleared. Then we began our real work: distributing Krsna’s mercy in the form of prasadam.

“Fortunately, besides our propane gas we also had extra food supplies because we had stocked a lot of bhoga for Janmastami. So we began a daily program of cooking and driving south to the coastal areas to distribute hot prasadam in the towns. The US Federal Emergency Management Agency [FEMA], charged with disaster mitigation and recovery, had been slow to respond, so in many places we were the first relief workers of any kind to arrive. People really appreciated it.

“For weeks we gave out a thousand plates a day. We also had kirtan and chanted Hare Krsna. At one point when FEMA complained that smaller relief organizations were complicating things in the area, a local congressman said to us, ‘You have my support. Keep doing what you’re doing, and don’t worry what FEMA says.’

“Because of the huge demand for food we soon ran out of supplies and made an appeal via our satellite dish to ISKCON temples around America. Within days devotees in Alachua, Florida, sent a truck with 20 thousand dollars worth of foodstuffs. Priyavrata das, who heads Food for Life Global in Washington, DC, teamed up with Sudajivana dasa, who gathered thousands of dollars of supplies and drove his own truck to the disaster area.

“In order to keep up the distribution we had to repair our own buildings. We made another satellite appeal and donations arrived quickly. Bir Krsna Goswami and I collected 40 thousand dollars from around the country in just a couple of weeks. Before the storm we were struggling to make ends meet. Suddenly Krsna was sending us unlimited resources to preach in the middle of the catastrophe.

“With renewed enthusiasm, we continued our distribution through the hard-hit coastal towns. We’d focus on areas where the Mississippi National Guard was distributing water and ice. People would form lines to receive those staples and we’d give them prasadam as a bonus. The soldiers were especially happy to get hot food because all they had were cold, army-style rations. We made a lot of friends down there.

“One advantage for our distributors was that the local telephone company, Southern Bell, put up free phone lines for a while. Our devotees from India were in bliss because they could phone home free for hours.

“In New Orleans our temple miraculously escaped any significant damage, but city officials deemed the whole area uninhabitable and the 22 devotees in the temple were asked to leave. Fearing that the temple would be looted or damaged devotees hesitated. Every day the Louisiana National Guard, which was sent into the city after the hurricane, would come and tell them to go.

“Eventually the devotees from Dallas sent a huge truck to New Orleans to collect the large Radha-Krsna Deities and other paraphernalia in the temple. It was a difficult mission because the military and police were admitting only essential vehicles for maintaining order and other emergency services. But a reporter accompanied the devotees in the truck, and each time they were stopped at a checkpoint he would identify himself and ask why the devotees were not being allowed in to save precious religious artifacts. Not wanting to get negative publicity, the officials let them through at each checkpoint.

“At the temple the devotees had just started loading the Deities when a military patrol arrived and wanted to seize the truck. They said it had entered the city illegally and they were taking it for emergency work elsewhere. When the devotees refused, an argument broke out. At one point the head of the patrol threatened the devotees’ lives. Another truck of the same size was then seen being driven along the opposite side of the street. Apparently it was an illegal vehicle, which the patrol had no hesitation in requisitioning. The devotees continued loading the Deities and other important temple paraphernalia into their truck and quickly left for Dallas.

“The hurricane continues to be a source of great misfortune for this region. But devotees provided so much relief that in appreciation the Bush-Clinton Fund, set up to channel donations to reinvigorate the area, gave us 30 thousand dollars to fix our broken buildings. The US Department of Agriculture also gave us a grant of 36 thousand dollars to rebuild our fences as well as buy a bulldozer to pile up the fallen trees in the forests on our property.

“Most important is that our distribution of prasadam and chanting of the holy names earned us respect and admiration, especially among the local and federal authorities. By combining forces with them, we were able to offset some of the suffering that Katrina wrought and to give people genuine spiritual welfare.”

“Somehow or other everyone can manage to perform such a yajna [sankirtana] and distribute prasadam to the people in general. That is quite sufficient for this age of Kali. The Hare Krsna Movement is based on this principle: chant the Hare Krsna mantra at every moment, both inside and outside of the temples, and, as far as possible, distribute prasadam. This process can be accelerated with the help of the state administrators and those who are producing the country’s wealth. Simply by liberal distribution of prasadam and sankirtana, the whole world can become peaceful and prosperous.”