Sankirtan shower under the Eiffel Tower – BLISS IN PARISS 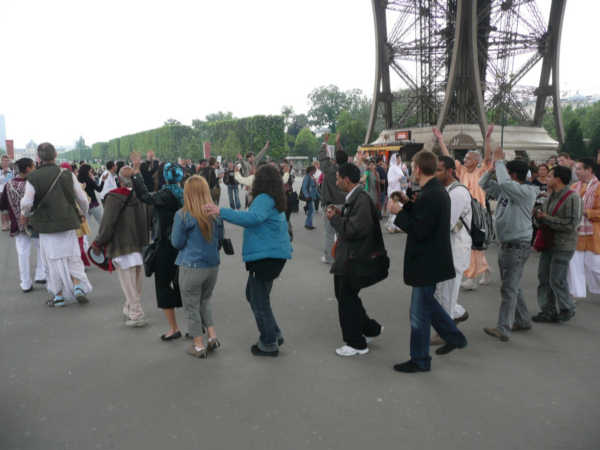 In 1971 Srila Prabhupada wrote to Madhudvisa Swami: “Paris is a very nice city, better than London. All historical buildings are there and they are very gorgeous and panoramic.”

Most visited tourist city in the world and largest metropolis in Europe. Paris the city of romance, famed capital of France. Here is a great place to dance! People everywhere.

Srila Prabhupada wrote this letter to guru Gauranga and the devotees of Paris when he was in London on 24 August, 1973 “I was very much pleased to come there and visit. Paris is developing nicely step by step. When I was at the Hotel de Ville I thought that this is better than London. So Paris is a most important city of the world. Work with great enthusiasm and make Krishna more prominent than Napoleon and Eiffel tower.”

Off we go to the Eiffel tower the most visited monument (which you have to pay to go up) in the world. 1000 feet high and standing since 1889. Hitler failed to destroy it or even climb it. The French had destroyed the lift system before the Germans came in. The French have a saying “The Germans conquered France but not the Eiffel Tower”. Originally considered a monstrosity by most, now the most famous ICON of Paris, attracting everyone.
15 enthusiastic devotees from the Paris Yatra are also attracted but for a different reason. Yes, we are going there to enjoy, dancing and chanting and selling also – selling the holy names for the price of one’s faith. The more faith we have the easier it is for others to purchase. The more enthusiastic we are the more enthusiastic the public will be. And these devotees are enthusiastic for Harinama as we slowly make our way towards the tower. As always, people smile, join in, take pictures and videos, laugh and wave. We reach the tower. Ecstatically dancing around in circles, singing, playing musical instruments – the force catches the hearts of many. Within minutes there are dozens of passers by dancing with us – round and round, ecstatically. We let go and the nectar does flow. The statement of Jiva Gosvami’s in his Sandharbas, (from the Javali Samhita) comes to mind. “The process of nama smarana has been described. Those who are desirous of obtaining unlimited varieties of spiritual bliss should always perform japa, meditation
(dhyana) singing (gana) and kirtan of the topmost names of Sri Hari. But in the practice of nama smarana one cannot obtain spiritual bliss as long as the heart remains impure. Whereas the practice of nama sankirtan does not depend on purification of the heart. Therefore nama smaranam is less effective than nama sankirtanam, and nama sankirtana has greater importance.”

Straight off the street, even persons who are in the modes of ignorance suddenly experience bliss when they join the kirtan at least for the time being. Such is the mercy of Lord Caitanya.

Thousands get the opportunity to connect with the sankirtan movement. Paris is such a wonderful city for sankirtan. Countless places to preach with people teaming everywhere. Just wait till the Deities move to their new home in North Paris. We are all praying that “Srila Prabhupada’s will in Paris”, will soon become fulfilled.

As we cross the bridge over the River Seine we realize how insane it all is. Spending one’s whole life trying to enjoy the fleeting scenes of this world.

In Boston in 1969 Srila Prabhupada spoke: “So our request is that everything will be complete if you take to this chanting: Hare Kåñëa, Hare Kåñëa, Kåñëa Kåñëa, Hare Hare/ Hare Räma, Hare Räma, Räma Räma, Hare Hare. And there is no very strict rules, regulation. You can chant anywhere, either in this room or outside the room or on the road, street, bus. Wherever you find opportunity, you chant simply Hare Kåñëa and see the result.

In Bombay Dec 1074 lecture on SB 3.26.18 “If people are simply induced to chant Hare Kåñëa mantra… Just see. Even a child, he is taking part. It is natural. There is no distinction between black and white, no question of language, nothing. You see practically. There is white child, black child. They do not know how to speak, tut they are dancing and chanting. So this movement is so important. Somehow or other if you can engage them in chanting and dancing, the whole world will be united.

UNDRGROUND SANKIRTAN – METRO YOGA The estimated eight million rats living underground in Paris are not the only threat down there. On the Metro system (Underground, subway) a small group of 4 or 5 devotees take to the carriages for 3 hours daily.. A revolutionary approach initiated by Candrasekhara Acarya proving that the people of France are far from unfavourable. It’s an amazing programme called Metro Yoga. “Welcome folks, we are from Metro Yoga and we would like to share this sublime yoga with you for a few moments”, as the devotees begin a sweet bhajans in the train. People smile and seem to enjoy the music and the humour and expertise of Candra’s presentation. Some clap and join in. The train stops and people get in and out. As it starts again he introduces the prasadam. “Ladies and gentlemen all the way from New York – a monk (Who else but Krsna Krpa of course) – who will come around now giving out healthy vegetarian sweets for free. Please take one, they are very nice. Are you a vegetarian mam? The passengers are enthralled. Many take the sweets as the music goes on. Some take books and CD’s. The train stops again. “Well we like to thank you folk so much.” “ Now ladies and gentlemen how about a round of applause for the members of the Metro Yoga group who have come here today voluntarily. Thank you. Practically everyone claps, many are laughing. As we leave the carriage, many hands are waving. All glories to the sankirtan devotees. 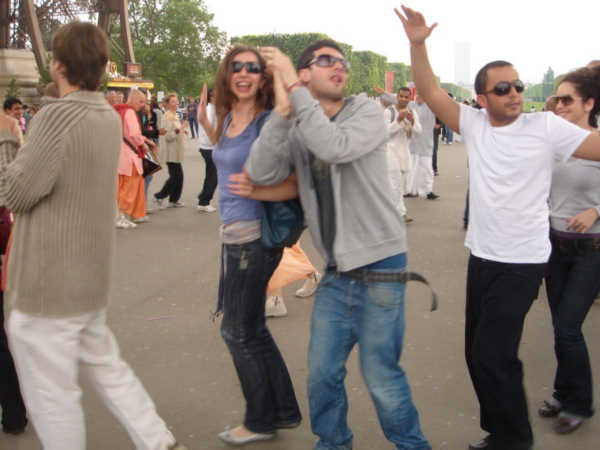