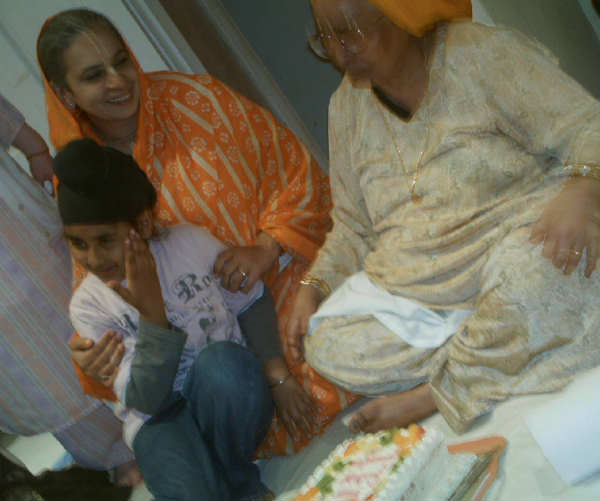 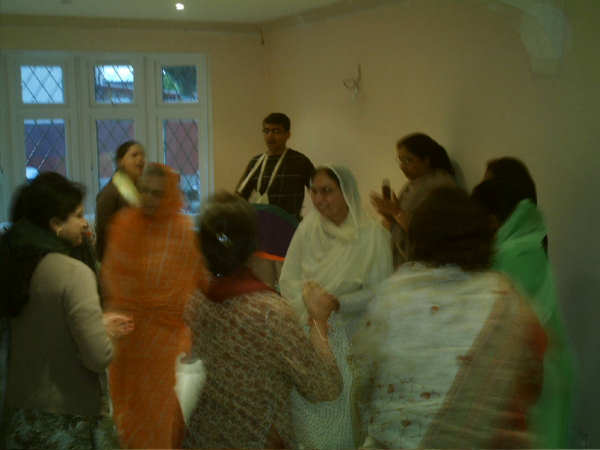 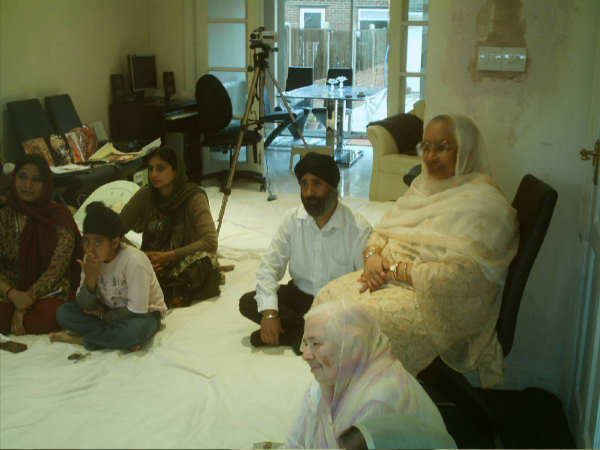 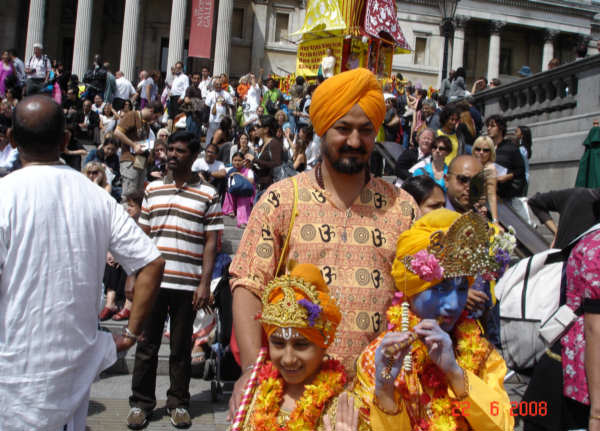 I landed at the Heathrow airport; London, nearly after eleven years totally in a revolutionized look ;clad in a cotton saree , face adorned with a prominent vaisanava tilaka ,fine Tulsi neck beads and a necklace of Tulsi shaped leaves with Mahamantra engraved on them around the neck. Dangled around my neck was the bead bag (hosting my pure beads) with a beautiful picture of Srimati Radharani embroidered on it. Dressed thus as enrolled in the divine army of Srila Prabhupada I stepped into world of maya. ALL SET TO FACE THE WORLD OF MAYA.

LONDON ; the land of kings and queens is the tourist destination of millions. It entices and enwraps the helpless entities falling prey to its tentacles. The heavenly land of illusion makes the poor souls forget the real purpose of life; embracing them till they breath the last. The alluring castles, palaces, towers, museums, theatres, pubs, clubs, bridges are right out of a fairytale. The famous Oxford street, the Piccadily Circus, the Trafalagar Square, the Hyde Park ………….. these all names ring a bell in the ears of the many who get pleasure at the sight of them. This the ultimate land for Sense gratification.

The Land where the mode of Passion and the mode of Ignorance prevail at large. People dancing to the tunes of these modes fall helplessly in the dark dungeons of Time (Kaal). The Age Of Quarrel with its black cloak enwrapping all make the darkness prevail here with all its charms. To save oneself from its clutches is not only difficult but quite impossible in the tinsel town of London. To defy ‘Kali’ all Vedic scriptures highly recommend chanting of the Name of Hari only. Srila Prabhupada at the ripe age of 69 out of compassion traveled to the western world to imbibe awareness of this consciousness. Srila Prabhupada expressed his compassion through preaching, which is the essence of compassion. “Preaching is the essence” are the immortal words of Srila Prabhupada ,the founder acharya of ISKCON (International Society Of Krsna Consciousness).

The seed of spreading Krsna Consciousness planted with care and affection by Srila Prabhupada is being watered by many of his disciples , grand disciples and great grand disciples and so on. The Vedic Scriptures conclude “the core of pure devotional service is being enthusiastic to carry out the instructions of your spiritual master”. Eagerness to achieve pure devotional service is the prime goal of all devotees. I reached London well in time to participate in the 40th London Rath Yatra of Lord Jagananth Who rolled on the busy streets of central London enthroned on a beautiful cart with His elder brother Baladeva and sister Subahdra leading Him on Their respective carts. People full of spiritual fervor dancing and singing pulled the carts with devotion reached Trafalgar Square in the afternoon by 3pm. The Lordships remained there till evening showering mercy to all. Many stalls were put up demonstrating ISKCON preaching activities all over the world.

A festival had taken over the most prominent place in London giving an opportunity for all to awaken the Krsna Consciousness. Amidst the crowd of thousands I spotted few Sikh families. As I had traveled with a sole purpose of preaching I did not want to miss an opportunity . One of the sikh couple were so enchanted by Krsna and Balarama that they had dressed their turban-ed kids like Them and thus attracted many to imprison them in their cameras. I spoke to them about ‘Vaisanava Teachings in Sikhism’(the title of my book) to which they totally agreed and no wonder that was obvious. I spotted another sikh family of four who had driven from west London only to have ‘darshan’ of Their Lordhships after having read a small book of Srila Prabhupada. I approached them and discussed the Granth Sahib with them in context with the Srimad Bhagvatam and Srimad Bhagavad Gita. Though amused they agreed to all what I said and invited me the next day to their home to meet the old lady of the house; mother of the head of the family I had spoken to.

I met her hesitatingly as it’s difficult to preach an old lady but to my surprise she was the easiest one to talk to as she agreed to all what I said very enthusiastically. She directed her son, his wife and their two children to follow Srila Prabhupada’s instructions as those didn’t deviate at all from the Granth Sahib’s teachings. In my heart I thanked Krsna as my mission to inculcate these teachings seemed bright. They followed me religiously to all other venues of my discourses and even sometimes drove me there in their car. They organized a discourse in their house to celebrate the birthday of the ‘old lady’ with a small altar raised with a picture of Sri Sri Radha Radhikaraman and a Pancattatva.

The program culminated with Narsimha prayers but I was amazed when the sikh gentlman requested humbly for the kirtan to continue so that all the family members and the guests could dance before the altar. He was well aware of the glories of dancing before the deities that left me spellbound. Truly, Krsna knows your heart and plans for you. This is one of the many pages of my endeavor to face maya ; the illusion. Preaching gives one the strength to face the dreaded enemy of all . Thus with the mercy of Srila Prabhupada and the spiritual master, I went on with plenty of programmes . The city of London that once enchanted me on the earlier visits (before being a devotee) now seemed defeated with the weapon of preaching.

I am grateful to my travelling partner Bhakta Neelam mata ji for all her support during the London yatra.